Danny Moran April 5, 2020 Bands & Gigs, Music Comments Off on Album Review: I Am Not A Dog On A Chain, Morrissey 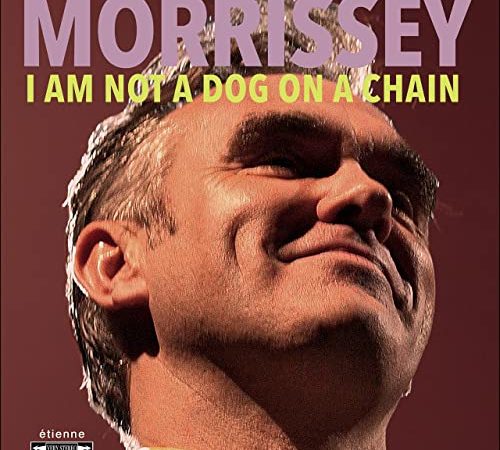 As those who can still be bothered to care continue to fume at his flirtationship with the far right, Morrissey presses on with the insouciance of a thrice-wed gaslighter, essentially putting down the dog whistle he’s been tooting on for the past quarter of a century, holding it behind his back, while summarily serving up an album of such solicitous pop savvy as to protest he’s been decent all along. This notably infectious 13th studio outing cements a transformation-of-sorts for the former Smiths man, in partnership with producer Joe Chiccarelli (on board since 2014’s World Peace Is None Of Your Business) to serve up his finest work in a long generation – certainly the best since his own grievance-based brand of politics jumped from animal to human and swept across the western world.

Once the Wildean wit whose any utterance seemed to fall from his lips with celestial timing, that performed chimera of a crippled Elvis, a hobbled Hawtrey, a doomed Dean in one flailing marionette, we have watched as a man (quite possibly as unwell as he always contended) lost the advantages of his clinical aloneness and began progressively to present with its symptoms, until nothing he could say to the room seemed anything but an embarrassment. Morrissey’s journey from pale saint to portly pariah may be deserved and strangely fateful, and it may be noted that now there really is panic on the streets of Dublin, Dundee and Humberside that he may be the last person we would call upon to say anything to us about our lives. Nevertheless, as we acclimatise to this overdue Re-bodging of the brand – the perkier tone, the poppier palette, of which more in a moment – it’s readily apparent that away from the clickbait circus of his ongoing cancellation, the stars in the singer’s firmament have perceptibly turned. It’s no longer in the words these days, for instance, where the window on Morrissey’s soul can really be found, but in the voice. 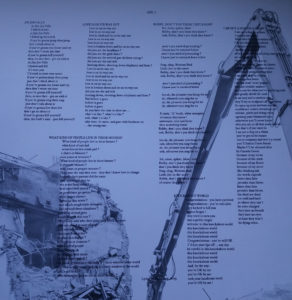 It’s such a tired Morrisseyism to lip service: the “nerve-gassed children crying” and “sad rich / hunting down elephants and lions”, and then postscript a lament titled Love Is On Its Way Out with the reversal “but before it goes / do you have the time to show me / what’s it like?” And yet the jealousy and lascivious intensity with which he delivers those last three words is crushingly persuasive, and the reached-for, deep, floored notes which follow are wrenchingly found. Nowadays, when you glance at the lyric sheet there’s little that Morrissey writes which has the capacity to surprise or detain in the way it once did. Those cheap rhymes and bizarre alliteration-before-meaning constructions can seem as ill-timed and awkwardly scanned as a faltering pass. So when he recalls walking with his grandmother down Talbot Road to buy Metal Guru in Once I Saw The River Clean or sings of his childhood teddy bear on album closer My Hurling Days Are Done it’s as likely the rub of the voice which may plump the prerequisite lump in susceptible throats. And the ache of good melody, of course.

If there’s a catchier collection of tunes in the Morrissey catalogue then it’s long since been deleted from the popular playlist. Let’s not shrink from this – there’s scarcely a dud to be found among this eclectic 11-strong suit, several of them notably forged in the wotsits of a sequencer and decorated with all manner of new pop stylings, from ten dollar mariachi trumpets (on the drowsy Darling, I Hug A Pillow) to lush pedal steel (on the breezy What Kind Of People Live In These Houses?) to the children’s choir which ushers out that plangent parting shot (My Hurling Days Are Done). Winning choruses abound: declarative (Jim Jim Falls); bubblegum (Knockabout World); Weill-esque (The Truth About Ruth). Back in the mists of time it was the rolling chords from Johnny Marr’s fiendishly detuned guitars which allowed the young singer to extemporise on a canvas unlike any in popular music. Now, in having him throw his arms around a synthesiser, producer Chiccarelli and writing partner Jessie Tobias suggest credible, belated reinvention and a potential lifeline in the waters presently engulfing the Morrissey shipwreck. The indifferent bleep and the Mozzer croon bowl along quite handsomely, funnily enough, and in tossing out so many of the old gestures – the ersatz machismo of his regular minstrel players – the new idea of a kind of enlightened Left Banke chanteur is given a leg up.

The acid test of that is the album’s loopy eight-minute interlude The Secret Of Music, a strung-out stream-of-consciousness over loping bass guitar which takes a tour of the orchestra, one instrument at a time, to light by dreaming lava lamp a – yes, really – discordant state of mind. It’s one of those moments – like when Audrey Hepburn does an impromptu ‘jazz dance’ for Fred Astaire in Funny Face – which requires giving your head a wobble before allowing it a second pass. Yet so tiresome has the old Morrissey become, and so sufficiently well-judged is the makeover, that it isn’t so difficult to go along with, which is perhaps the point where this album’s ambitions come into focus. The invitation to suicide in opening track Jim Jim Falls may trigger some millennial sensibilities but in general there’s little to provoke The Guardian’s Luftwaffe this time around. Only the title track herds us back to the bullring of Morrissey’s public trials, swelling from sunny walk-in-the-park to a confused though appreciably furious beagle-mauling: “Maybe I’ll be skinned alive / By Canada Goose because of my views / Because of the truth / because of my fleece / because of my niece / like drinking ink / the words explode / fatter than fists / louder than blows / the dead are dead / ice cold and hard / to where they can’t be overcharged / they have no breath / they have no eyes / at least they won’t be going twice”.  Take that, world. 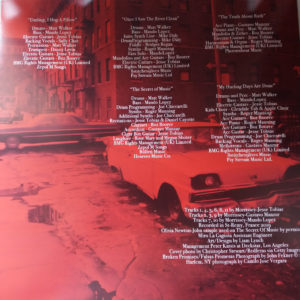 Is it an album to be recommended? That’s another matter. Certainly, the conspicuous quality of the teaser which preceded it, the closet mini-opera Bobby, Don’t You Think They Know?, was no one-off. This is an accomplished and refreshing piece of work. The offer it makes of itself – no race-baiting but I was right all along and anyway what do you think of my poptastic new direction? – may be tempting to any predisposed to reacquainting themselves with the Morrissey misery verse, though the bargain being proffered could be seen as Faustian.

If you sing your heart out on national television with the insignia of the far right pinned to your lapel then you broadcast a message which every sensible-thinking citizen will see as their duty to throw back in your face. If you lack the perspective to see that there is a war taking place across the globe between tolerance and hatred and that there is no room in that landscape for your faux patriotism and pick-and-mix prejudices then you deserve a picket line under your chin, a record-pyre at your local sports ground, and you can take your ten-dollar trumpet and stick it sideways where the sun once shone – irrespective of the nuances of your position. How we got from that flailing, tree-wielding treasure to the shambling oaf in a suit porking about in front of his name in 12 foot lettering is beside the point, and those of us who waited for you at backstage doors as 14-year-olds will feel we have little choice in the matter. Presumably, the front man of The Smiths instinctively did not dare step into the vocal booth to sing Bengali In Platforms over the music of his then writing partner, and the demise of that working relationship was the beginning of this.

So throw it back we shall. There’s no redemption here. The pantomime cow clumps on for the January crowd. The singer refuses to leave the stage, unbent and unbowed he would have you believe, though with the pridefully wakened passions of a man singing for his life.

Tags: Danny Moran, I Am Not A Dog On A Chain, Morrissey, Music