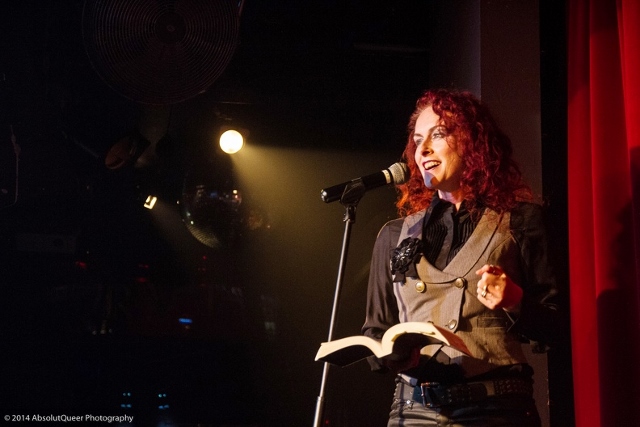 If you’ve been out and about in the North at any time over the past 30 years, you may well have seen performances by the likes of burlesque chanteuse and Vampire Queen Rosie Lugosi, seminal post-punk outfit The March Violets (with a shock-haired female Goth singer), or the charmingly powerful poet Rosie Garland.

They are all, needless to say, one and the same person – a Rosie by any other name, if you will. And in the last few years Garland has added yet another string to her bow, as an acclaimed novelist. Her first book, 2013’s twisted Victorian circus tale The Palace of Curiosities won her many new admirers; the follow-up, Vixen, has just been published in paperback. Vixen is set in 1349 in the North Devonshire village of Brauntone, and neither the time nor the place are entirely arbitrary for Garland.

“I’m fascinated by times that are on the cusp of massive change, when the world takes a deep breath in because something awful or monumental is about to happen,” she tells Northern Soul. “In Vixen, the Black Death is just about to hit, and not only was that massive in terms of population – we lost half the population of Europe in six months – but it brought about huge societal changes, too. Also, it’s set in the medieval version of the village I lived in as a teenager. And yes, I had a very loving relationship with that place because it was beautiful, but I also had a very mixed relationship with it because I couldn’t wait to get the hell away from it. It was stifling, and that sense of isolation and being penned in I put physically into the novel. You’ve got the forest to the north, the sea to the west, the river to the south. It’s this idea of a village with its back on the world.”

Despite Garland’s winning way with a historical setting, she doesn’t see herself as a historical novelist but is, by her own admission, “drawn inexorably to writing in the past”.

She says: “I feel a great freedom in writing about times that aren’t the present day, and there’s something about books being time machines. But you know this whole thing about, ‘the past is a foreign country, they do things differently there’? I think that’s one of the greatest lies we’ve ever been told. I think the past is exactly where we are now and people do things completely the same. I think the past is now. I mean, we can talk about quantum physics and the idea of the continuous present…but that was kind of my driving engine when I wrote Vixen. When I was writing the characters, I felt them and saw them as people who could easily live next door to me now, but just didn’t have iPads and electricity and so on.”

Does she think that a hallmark of bad historical fiction is that characters speak in an awfully mannered, heightened and not remotely convincing fashion? “Yeah! Vixen is a ‘forsooth’, ‘yea verily’ and ‘gadzooks’-free zone.” 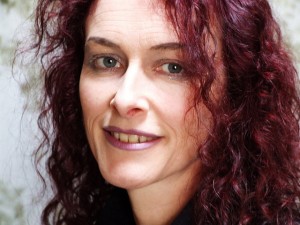 It was back in 2000, with a huge amount of experience of writing poems and short stories under her big-buckled belt, that Garland first had a crack at writing a full-length novel. Like so many aspiring novelists, that first attempt went unpublished. Reflecting on it now, she says: “Well, it was my first novel! It wasn’t awful. My second completed novel was awful. I learnt a great deal about how not to write a novel. That didn’t deserve to be published nor ever will be.”

After three more unpublished novels, Garland wrote The Palace of Curiosities and duly secured a contract with HarperCollins. Happily, fans of her earlier work in other fields have now followed her through into her prose writing.

Garland has moved around a lot in her life. In 1986, on her way back from two years spent working in the Sudan, she arrived in Manchester, initially drawn by the city’s lively LGBT scene. Nearly 30 years later, she’s still calling it home. “I thought I would stay a couple of years. It’s a funny old place, Manchester, and I have never, ever found a good enough reason to leave. I sometimes call it ‘unlovely’, but I absolutely love it, every mucky brick of it.”

Indeed, there’s a genuine depth of affection in her feelings for the place. “There’s something about it which I never thought I’d fall in love with so passionately. I mean, I’ve had my up days and my down days here, no doubt, but I’ve never had a boring day. I think the community of writers, the community of poets, the community of artists is very welcoming, very open, very warm. I mean, obviously there’s idiots wherever you go. But having been born in London – well, I think that says it all really. I wouldn’t go and live in London for a big clock.”

Manchester will feature as the backdrop to Garland’s third novel, currently at the writing stage. It has a working title, but understandably she doesn’t want to disclose that just yet – though she does reveal that, again, it won’t be set in the present-day. 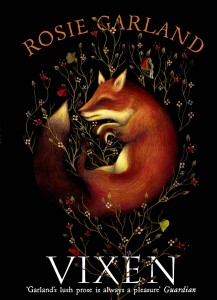 As a novelist, Garland has been developing a fruitful working relationship with the UK’s libraries and independent bookshops, and expresses an enthusiastic continued commitment to them.

“If you interface with the internet, you get what you’re looking for, but if you go into a bookshop, you may come upon something that you’d never imagined before. Because the bookshop owner is enthusiastic and passionate about what they’re selling – passionate about what they’re selling, let’s just say that twice – rather than, ‘give me your money and please go away’. Ditto with libraries. Libraries are transformative and dangerous places because they make people think new things, and it’s about education accessible for all, not just the wealthy.”

Later this year she’ll be collaborating on a project with Manchester’s John Rylands Library. “I’m just amazed at these fabulous projects that come in my direction. They’re putting on a sort of Gothic literature exhibition in July and they’ve asked me to curate one of the cases. I’m going to be curating a case based around ‘Women and the Gothic’. I’ve never been asked to curate something before, so it’s very exciting.”

With various creative endeavours to juggle – The March Violets have been gigging again, and Rosie Lugosi tends to rise from the dead periodically – it’s evident that Garland relishes all that this diversity has to offer. “I think they’re a particularly German thing, but you get these little weather vanes in the shape of a house. There’s two doors and when it’s rainy, the little man comes out with an umbrella, and when it’s sunny he goes back and the little lady comes out with a sun hat on. Depending on what the weather is, the little man or the little lady will come out. And I sometimes feel that about my writing. Like, at the moment the novel me is at the fore, but give it a bit of time and then the poet me will be at the fore.”

There are, Garland reckons, no other particular creative avenues she still harbours a yearning to explore. “I’ve got quite a lot on the go, really. I’ll be completely honest, if I had a burning desire to do something, I’d be doing it, life being very short, and we never know when a grand piano is going to drop on our heads.”

She is, it’s fair to say, not a great fan of modern displacement pastimes. “Do you know, of all the things I say, this is the one that gets me the most flack, but time spent playing computer games is time you will never get back. I totally appreciate that computer games have got text, and that they are texts, and that a lot of them are very imaginative, but that’s in the production of them, not in the consumption of them. But then the time you spend playing Solitaire, or time spent, I don’t know, picking your nose is time you’ll never get back. If you have got a burning desire to write an opera or you’ve got this idea for a short story then for heaven’s sake do it. Do it now.”

Garland’s current sense of momentum may come from a particular source. “I think I’ve always been pretty much like, ‘let’s get on and do this thing’ – but having been diagnosed with cancer of the throat in 2009 concentrated the mind wonderfully. I mean, I’m very lucky. I’ve just had my five years all-clear which is wonderful, and again I’m incredibly lucky and I know not everyone else has such a positive outcome from this awful disease. But it really has concentrated my mind in many ways. If I was a ‘go for it’ person before, then that’s just increased exponentially.”

Vixen is available in paperback from HarperCollins, more info at www.rosiegarland.com