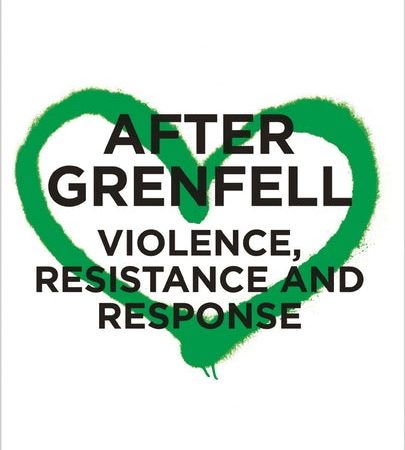 On June 14, 2017, a fire engulfed a tower block in West London. Seventy-two people lost their lives and hundreds of others were left injured, displaced and traumatised. As the second anniversary approaches, After Grenfell, edited by Dan Bulley, Jenny Edkins and Nadine El-Enany, brings together artists, activists and academics through essays, poems and pictures. The book includes poetry by Ben Okri and Tony Walsh, photographs by Parveen Ali, Sam Boal and Yolanthe Fawehinmi, and contributions from Phil Scraton, Daniel Renwick, Sarah Keenan, Gracie Mae Bradley and the Radical Housing Network.

Grenfell Tower is a tough subject to talk about, and it’s difficult just writing this review. Addressing the danger of “opportunism, using the label of Grenfell to further careers and push agendas”, Bullens, Edkins and El-Enany say they have responded “only in our voices”, and this is a key theme throughout the text. Authors have not been paid for their contributions and all royalties due to the editors will be donated directly to a Grenfell charity, as well as an agreed percentage of the publisher’s profits.

When disaster strikes and the whole world is looking in (and offering its opinion), it feels intrusive. We watch from our television screens, read about people in newspapers as though they were nothing but stories, and learn about them in column inches. In a myriad of ways, After Grenfell explores how we can take this interest, this outrage, and channel it towards change-making. Scraton, referring to the words of American writer and political activist, Susan Sontag, writes that “in bearing witness to the ‘ordeal of others’, we are reduced to voyeurism unless we ‘do something to alleviate it’”. That is the priority. Grenfell Tower’s epitaph is ‘Change Must Come’. 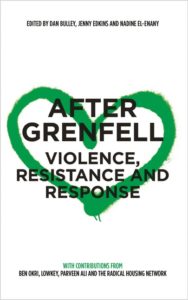 This book is an incredibly careful exploration of attitudes towards the Grenfell fire as well as media representations and the reaction in, and to, the wider community. In their introduction to the text, the book’s editors write: “Kensington and Chelsea, a Royal borough and one of Europe’s most affluent local authorities, revealed its binaries: of affluence and poverty; of inclusion and exclusion; of deserving and undeserving.” It’s this overarching theme that is most evident throughout the book.

For me, the standout contribution is Ben Okri’s stunning poem, Grenfell Tower; June 2017, which begins with the emotive line: “It was like a burnt matchbox in the sky”. I re-read it a few times and, on each occasion, it reduced me to tears. The repetition of “if you want to see how the poor die, come see Grenfell Tower” has stayed with me long after the last page. This is an extremely important poem.

After Grenfell needs reading a few times as it’s packed with opinion, history and fact. While incredibly interesting, I had a hard time understanding some of the more academic content and, as you might expect, it’s not a quick read. But what I liked about this book was its urgency. Yes, it’s difficult to discuss this topic and there is a real fear that people might object or see it as opportunist, but it is so important to raise awareness, to explore the origins of this disaster and figure out the steps to make sure this never happens again in our society. Furthermore, it’s crucial that we address the huge disparity between rich and poor, that we shine a light on a world where libraries are closing, funding is cut, homelessness is rife and those with the power to make changes are seemingly turning a blind eye.

While the subject matter is sad, and the text ultimately ponders whether society will ever really be ‘after Grenfell’, it’s not an overwhelmingly negative read. I found hope in these pages, hope that the world is waking up, starting to give a shit, and fighting for the people who have had no justice. “The voices here must speak for the dead,” writes Okri. “Speak for the dead. Speak for the dead”.

After Grenfell: Violence, Resistance and Response is published by Pluto Press and available to buy now.

The Stinky Chef: Ceci Fritti (fried, spiced chickpeas) What did the Romans ever do for us? Here’s a (proper yummy) recipe typical of the Romans from our local recipe whizz, The Stinky Chef. northernsoul.me.uk/the-stinky… pic.twitter.com/y88COYIWX0

The Stinky Chef: Ceci Fritti (fried, spiced chickpeas) What did the Romans ever do for us? Here’s a recipe typical to the Romans from our local @TheStinkyChef northernsoul.me.uk/the-stinky… #recipe pic.twitter.com/RJwADEfsnC