But it was a very different story back in the 60s and 70s. Making your own music was almost exclusively a man’s world. Only a few determined, talented women managed to break through, and none more so than Carole King.

King co-wrote an impressive number of hits including Will You Still Love Me Tomorrow, The Locomotion, One Fine Day and the Aretha Franklin classic You Make Me Feel Like a Natural Woman. Neil Sedaka even wrote a song about her – the chart-topping Oh Carol.

She had her own success with It Might as Well Rain Until September in 1962, but major stardom performing her own material didn’t arrive until 1971 with the Grammy award-winning album Tapestry. The record remained a chart fixture for more than six years, selling 25 million copies worldwide.

“It’s a genius album and so relatable,” explains Bronté Barbé who stars as Carole King in Beautiful, the musical based on the musician’s story. 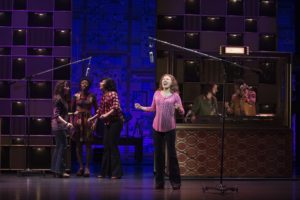 Macclesfield-born Barbé first came to the public’s attention in 2010 as one of the finalists in Over the Rainbow, the BBC‘s search for a Dorothy to star in The Wizard of Oz musical.

“It wasn’t my goal to be famous or anything,” Barbé confesses. “I’d been offered a place at drama school and was trying to raise the funds I needed to be able to do it. I was about to defer my place for a year when I saw an ad in the local paper for the Dorothy auditions. I didn’t want to go because I wasn’t sure it was really for me, but I was encouraged to try out for it and made it all the way to the live finals. After the show, I got a scholarship for drama school plus funding from Andrew Lloyd Webber’s foundation which enabled me to continue.”

TV talent searches can often be brutal affairs but Barbé’s experience in the hunt for Dorothy was nothing but positive.

“Despite my initial reservations, I ended up having the most amazing time. It was the perfect shop window to show what I could do. If you’d said to me back then that I’d end up playing the part of Carole King on this tour, I wouldn’t have believed you. There’s this little part inside of me going ‘yes!’ and I’m proud of what I’ve achieved so far.”

Carole King released Tapestry almost 30 years before Barbé was born but, thanks to her Mum, she was already familiar with the album well before starting work on the show. 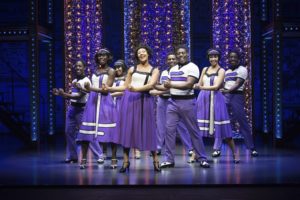 “I got a record player about five years ago. My Mum bought me the album because she’s always loved it and really wanted me to hear it. There’s a song on there for every mood so you can listen to it at any time. The way Carole writes is just so personal and honest and you just go ‘gosh, that’s me’. I wasn’t aware of all the other fantastic songs she’d written before Tapestry until I started the show. It’s an amazing body of work.”

She continues: “I love that vinyl has come back. I missed it first time round and it’s so nice having something tangible like an album rather than impersonal downloads. I love the whole ritual of getting a record out of its sleeve and putting it on.”

Beautiful isn’t just a jukebox musical. The inspiring story of King’s struggle to become a songwriter and performer in her own right is woven through the hits. Barbé is acutely aware of the pressure to do the project justice. 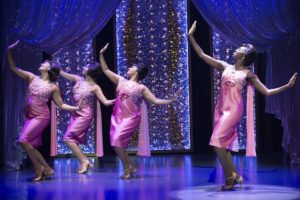 “People love these songs and know them so well because they’ve heard them a million times. I watched a lot of videos and interviews and read Carole’s autobiography to immerse myself in her personality. I do my interpretation of her and hopefully I’ve achieved something identifiable that sounds a bit like her. A straight impression would be impossible to do and wouldn’t really work. Fingers crossed, the audience enjoys it and has a good time.”

The hardest part for Barbé wasn’t perfecting the vocal mannerisms; it was mastering the art of looking convincingly like a pianist.

“When they first gave me a video to watch and learn, I thought I’d never be able to do it. I even had a bit of a cry,” she admits. “It felt like such a mountain to climb but I persevered and felt a major sense of accomplishment when I eventually cracked it. I’d like to learn how to actually play one of the songs now and perform it on stage.”

The piano playing may be pretend, but the singing is all Barbé. To keep in top vocal shape for the demands of the tour – which arrives in Manchester in December – she sticks to one rule. 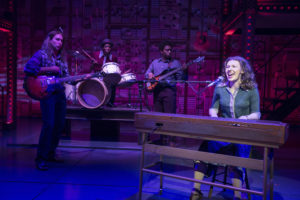 “Rest is a must,” she says. “If I don’t get enough sleep, I’m going to be in trouble. I have tricks I fall back on if I’m tired, but I’ve grown with the demands of the show and am now able to gauge how I’m feeling. You get used to it but it’s a funny way of living. It’s fantastic fun, though, and you create amazing bonds with the people in the show. You also get to explore a new place every week, so you never get bored. Being a Macclesfield girl, I can’t wait to be up in Manchester for Christmas.”

Carole King was a role model for many of the female singer-songwriters who followed. But Barbé’s heroes come from a different area of entertainment.

“I love classic British comedic performers. My absolute role models are Julie Walters and Victoria Wood because I love sketch comedy and they are the very best. I’m also a huge fan of Sutton Foster, the original Fiona in Shrek The Musical on Broadway. Comedy is a big part of who I am, and it may be a cliché but for me, laughter is the best drug.”

Beautiful is at the Palace Theatre in Manchester between December 12, 2017 and January 6, 2018. For more information, or to book tickets, click here.

In the late 60s and early 70s, Carole King was one of only a handful of female pop pioneers successfully writing and producing their own work.

Joni Mitchell
This much revered Canadian musician had a folk-based style and she provided a calming musical influence during a time of civil and social unrest in America. Often referred to as ‘the voice of her generation’, Mitchell inspired devotion from bed-sit based students the world over. Her albums Blue and Court & Spark feature impassioned songs of heartbreak and disillusionment and regularly feature in ‘best ever’ polls. Now in her mid-70s and still going strong.
Key songs: Big Yellow Taxi, Both Sides Now, Woodstock

Carly Simon
Carly Simon began performing in the 60s with her sister before being signed as a solo artist in 1970. She performed with the likes of James Taylor and Cat Stevens and topped the US album charts in 1972 with No Secrets. The collection included her classic song You’re So Vain. In the 80s she teamed up with Nile Rogers for the hit Why and won an Oscar, Grammy and Golden Globe for Let The River Run, the theme to the movie Working Girl.
Key songs: You’re So Vain, That’s The Way I’ve Always Heard It Should Be, The Right Thing To Do

Lynsey de Paul
In the early 70s UK musical landscape, Lynsey de Paul was the only British woman to achieve major success with her own work. She wrote 14 hits over five years and performed seven of them herself. In 1974 she became the first woman to win a coveted Ivor Novello song writing award going on to win another the following year. An accomplished pianist, producer and arranger, her distinctive multi-tracked falsetto vocals were later favoured by the likes of Enya. Often seen as a pre-cursor to Kate Bush, de Paul died of a brain haemorrhage in 2014 aged 64.
Key songs: Sugar Me, Won’t Somebody Dance With Me?, Storm In A Teacup

Kate Bush
In 1978, the 19-year-old Kate Bush was the first woman to write her own UK number one single with Wuthering Heights. She also became the first British female to top the UK album charts. Her releases became increasingly sporadic and musically experimental with every album reaching the top five. She toured in 1979 but made fans wait 35 years before performing live again in 2014. The shows sold out in minutes and returned all her albums to the charts, a feat only matched by Elvis. Post 70s success include Hounds Of Love, and This Woman’s Work. One year shy of 60, national treasure status beckons.
Key songs: Man With The Child In His Eyes, Wuthering Heights, Babooshka