Exhibition Review: Sit Down & Get Out!, The Portico Library, Manchester

Sara Riccardi February 1, 2022 Art, Arts Comments Off on Exhibition Review: Sit Down & Get Out!, The Portico Library, Manchester 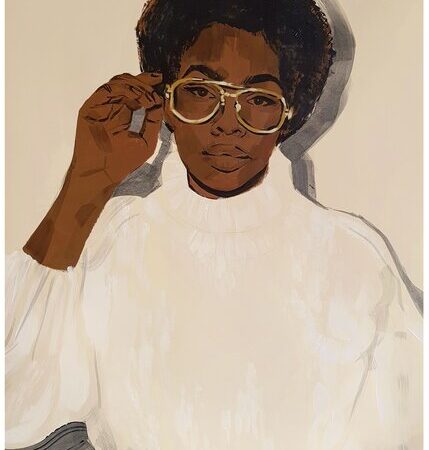 On entering Manchester’s Portico Library, the strong presence of a figure catches the visitor’s gaze. It’s a woman called Cara Monica, portrayed by her sister Kim Thompson. According to the label, Thompson sees Monica as a ‘rude woman’ in the most empowering sense possible. An example of her ‘rudeness’ can be seen alongside the portrait, where a poem by Monica is displayed. Its last stanza reads: ‘And my activism is expansive./ Its arms stretch like elastic to find you./ It reminds you to pull against the status quo/ until something finally/ SNAPS.’

At the right of the portrait and poem, one of the beautifully colourful Polite Reminders by David Parker-Conway reads ‘NO SNAPPING’. This juxtaposition beautifully indicates the complexity of Sit Down & Get Out!, a new exhibition at the Portico, which delves into the theme of politeness. 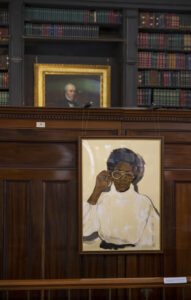 For Monica, snapping the elastic of the status quo is a necessary, liberating act. This could take the form of wearing her natural Afro hair, as seen in the portrait, and rebelling against the notion of it being ‘unprofessional’ or ‘inappropriate’ (visitors to the exhibition can find further research about this subject at the interactive additional readings table). But for Parker-Conway, kindness, patience, and respect are vital and his work represents the liberating expression of his desire for a more sensitive society.

Parker-Conway, an artist from Manchester-based mental health charity 42nd Street, is also one of the artists included in the exhibition. Young people from the charity were paired with Manchester artists and together they worked on online sessions exploring the theme of politeness. Some of their contributions explore politeness towards others as an act of kindness, a desire to express care in our interactions with others, and advocate for a rediscovery of this side of politeness in our current society. This is most notable in Parker-Conway’s own series of signs and Bob Nutts Jr’s painting, Please.

But the exhibition also delves into discussions centred around the institutionalised notion of politeness, which, for many people, is exclusionary, elitist and extremely limiting. Here, Charmaine Turner’s white and blue ceramics, decorated with Jamaican terms, explore perceptions of politeness as exclusionary. In this case, Turner looks at language. The label located next to the extremely elegant objects states that in a 2006 study, 76 per cent of employers admitted to discriminating against applicants because of their accent. In this scenario, the consideration of polite manner has little to do with care. Instead, it acts as a barrier that ultimately enforces inequality. 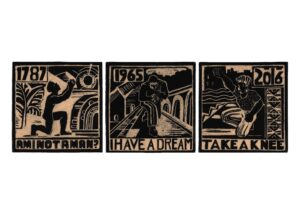 Other artworks take a similar approach to Turner’s and use traditional so-called posh media, but in more subversive ways. For example, in Bollocks by Bel Moody, the word bollocks sits triumphantly on an elegant cross-stitch (pattern by SmileXStitch), framed by an exquisite floral pattern. Does the presentation of the word make it more shocking? Or is it less rude? Is there a double standard when it comes to men and women and politeness? Are comments like ‘boys will be boys’ and ‘ladylike’ simply damaging ways of applying politeness and an expectation of manners based on gender?

Two prints, Buckingham Palace and Clapham Common, by Caz Hughes also address double standards and respond directly to Beer Street and Gin Lane by William Hogarth, which are exhibited in the case above. In Hogarth’s pieces, the irony is the different expectation for men and women when it comes to alcohol consumption. In the modern version, Hughes addresses double standards in the response to a vigil staged for Prince Philip and the one held for murder victim Sarah Everard, which were approached in starkly different ways by the police. 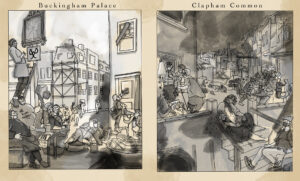 Hughes is not the only artist to look at the idea of acceptable resistance. Polite protest is addressed with startling simplicity and yet incredible effectiveness in the three tiles by Turner. One is dated 1787, another 1965, and a third 2016, each representing a black figure kneeling. This suggests that systematic racism is still evident and that there is still a need to implement real change. The images also raise questions about the limits imposed on lasting change by notions of politeness.

Visiting Sit Down & Get Out! left me feeling as though I had just read an extremely good essay with questions, arguments and counterarguments, while enjoying diverse and interesting artworks. I would highly recommend that you experience the exhibition for yourself. Besides, it would be rude not to. 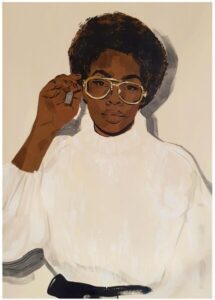 Sit Down & Get Out! is at The Portico Library in Manchester until March 21, 2022. For more information, click here.

Tags: Exhibiton, Manchester, Review, Sara Riccardi, Sit Down & Get Out!, The Portico Library