“an itch we needed to scratch” – The Bluetones are back

Chris Payne September 5, 2015 Bands & Gigs, Music Comments Off on “an itch we needed to scratch” – The Bluetones are back

At some point it was officially decided that the mid-90s ‘movement’ Britpop started in 1994, something to do with the release of Blur’s Parklife. It has also been suggesed that it started two years previously when Suede released The Drowners. You could also argue that the title ‘Britpop‘ was a right load of old nonsense and became a lazy journo term to describe any British music made in the mid-90s.

Anyway, as its 20th anniversary approached last year, there were a spate of newly-reformed bands announcing tours and festival appearances. Now, a full two decades after their debut album Expecting to Fly was released, The Bluetones are making a welcome return to the circuit, playing a handful of gigs across the UK. I caught up with guitarist Adam Devlin prior to the band’s visit to Manchester Ritz later this month.

Chris Payne: I’ve always found it hard to place The Bluetones musically – that was the appeal I think. I wondered if all members of the band were into the same kinds of music or if there was a bit of a convergence of influences.
Adam Devlin: The latter. We all came from different places musically, although we were all influenced by the likes of The Beatles, The Smiths, The Stone Roses. I was more of an ‘indie-schmindie’ kid – Orange Juice, Aztec Camera. Eds [Chesters] has older brothers so he soaked up a load of their stuff, including Northern Soul and punk. Mark and Scott were into hiphop, which I’d never really been into. Mark also liked a bit of Led Zep. There were some common threads though. Early on we were all getting into the 60s West Coast scene like Buffalo Springfield, Love, Neil Young.

CP: And The Bluetones always got on? With two brothers in the band?
AD: Well, there were no Spinal Tap-esque moments, even with two brothers. Me, Mark and Scott were friends before the band started – although there is one parallel with Spinal Tap in that we really went through drummers until Eds joined. I remember we were rehearsing in a garage in Hounslow and one drummer came to audition. Half-way through the rehearsal we stopped for a cup of tea. He popped out and we never saw him again! He had brought these expensive drum accessories – drum pedals etc – and a couple of Traffic albums. Left it all. Very odd. But 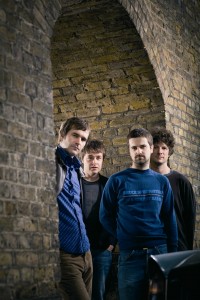 when Eds joined he just clicked seamlessly. We were kindred spirits, really.

CP: I first saw The Bluetones supporting Supergrass in Edinburgh at the beginning of 1995 and then saw them another three times in Glasgow within 12 months – as well as at T in the Park.  I put it to Adam that 1995 must’ve been insane – nowadays you don’t really see bands doing the same cities four or five times in a year.
AD: At the time of our first NME review we’d only played about ten times – all in London.  Our first tour was with a band called Strangelove and it was very poorly attended. That was character-building.

At the beginning of the ‘curve’ we toured relentlessly for two years. It was incredibly fast and we supported loads of bands – Oasis, The Charlatans, Radiohead. Radiohead were about to go ballistic. They were touring The Bends and as we watched them each night, we were thinking that we might as well just go home.

CP: I remember seeing Radiohead in ’95 at The Garage in Glasgow. They nearly blew the roof off that night. It was an exciting time. I was 18, just started university and was spending most of my student loan on gigs. Some bands you just knew were going to be massive, some could go either way, and some you could tell were in it for the short haul. You could tell instantly that Radiohead would be around for a while, to say the least. I suppose there must have been pressure on The Bluetones to live up to all the hype.
AD: We wanted to do things at our own pace. The first album was successful and so there was real pressure on us for the second album. But we were one of the bands who didn’t really take that too seriously. Our label A&M were very good with us – very patient. We just wanted to be left alone.

CP: And so to ‘Britpop’. This umbrella term seems to have rubbed more than a few bands up the wrong way over the years. I was interested to find out if Devlin considered the moniker as a blessing or a curse – especially as no article will mention the band without mentioning Britpop. And this article is no different.
AD: We’re a lot cooler with it these days. At the time it was a bit of a curse – no band likes being pigeon-holed. But it did give us a leg-up. It meant that we were easy to market abroad, especially in America and the Far East. Kids in Japan were lapping it up. 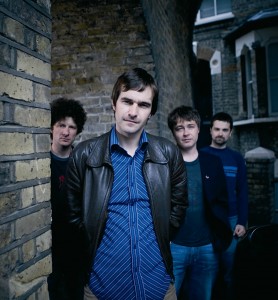 CP: I remember it being a really broad term as well – a real ‘catch-all’.
AD: Yes, I remember seeing one of those ‘Top 20 Britpop’ lists at the time in NME or somewhere and thinking ‘The Orb’s in there? Really??’ At the time I remember us being a bit prickly about it all.

CP: One of the gigs I saw in ’96 was the Brat Tour, with The Cardigans, Heavy Stereo, The Bluetones and, er, Fluffy. Was that tour a pleasant experience?
AD: Eds went to school with the guys out of Heavy Stereo, so we knew them well. I remember us spending a lot of time with The Cardigans. They were a bunch of quirky Scandinavian lunatics.

CP: Did you feel like there was a ‘now or never’ element to getting back together, what with the 20th anniversary of Expecting to Fly?
AD: When we finished in 2006, it felt like a natural conclusion. Half the reason we split up was that we had children. So after the final tour, all we said was that we weren’t going to tour again.

No, it didn’t feel like it was now or never, but it was an itch we needed to scratch. I think we all started feeling it at the same time. And then we all got an email from Eds asking if we fancied ‘getting on the horse again’.

CP: So, any plans for any new material?
AD: I genuinely don’t know – never say never to a new record. We’ll see. Potentially we might look at the odd festival but we’ll see how it goes.