I’m tired of being told what a woman should and shouldn’t say. Coming off the back of a week where social media is replete with people uniting and sharing their experiences of sexual harassment and assault, I feel disheartened that others are trying to shame them for their honesty. It’s been a week which has witnessed wonderful solidarity – from both men and women – and absolute despair at the state of (some) public opinion.

After much deliberation, I posted my status. I added my #MeToo. I did so not only after witnessing thousands of women do the same but after spending an evening at The Portico Library listening to Lyndall Gordon talk about her new biography, Outsiders: Five Women Who Changed the World, which tells the story of five novelists – Mary Shelley, Emily Brontë, George Eliot, Olive Schreiner, Virginia Woolf – and their famous novels. We have long known about their individual greatness but, in linking their creativity to their lives as outsiders, this biography highlights the genius – and experience – they share. It’s about “their evolving alternative to the mess the dominant group has made of our world: a turn to women’s history of non-violence, nurture and listening”.

There was something restorative about listening to Gordon talk about these wonderful, smart, capable, literary women – these outsiders. I had to use my voice and participate in my own small way.

Gordon is the prize-winning author of six biographies, and is in possession of a pretty impressive CV. She left South Africa for New York to become a student at Columbia when Women’s Liberation took off there in 1970. Afterwards, she moved to Oxford through the Rhodes Trust. She is now a Fellow of St Hilda’s College, Oxford and the Royal Society of Literature. She’s also won, and been nominated for, a whole host of awards. 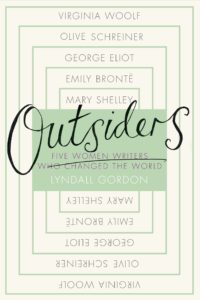 I’ve come to see Gordon in conversation with Libby Tempest at one of my favourite spaces as part of Manchester Literature Festival. The Portico Library is a stunning venue and absolutely fitting for the subject matter. As Gordon talks about these pioneering women of literature, it gives me the warm fuzzies to be surrounded by beautiful books.

She opens with a presentation which, although it’s slightly difficult to follow due to the occasional mic issue and a slightly stilted deliverance, is informative and offers the audience a preview into the lives of all five women and “a new genus of womanhood across generations”.

“It took a leap of imagination to see what a woman might be,” says Gordon. “All five were motherless, so there was no model of womanhood at home. And all women had to leave home if not to lead unknown lives. They found their models in books, books by women who had come before them.”

The lineage begins with Mary Wollstonecraft , a sort of ‘mother figure’ in literature, and we hear how the author wrote in a letter, “I am the first of a new genus” and believed that women had to remake themselves as “authentic beings”. Her daughter, Mary Shelley, witnessed and deplored the impact of war, and later went on to pen Frankenstein, a novel about a monster who thinks nothing of killing a child and later a young woman, full of revolutionary ideas about the state of the world. George Eliot was a fiercely intelligent woman responsible for Middlemarch, a novel so ground-breaking that several impostors claimed responsibility for the work.

Emily Brontë was the most “uncompromisingly authentic” writer from the group while South African author Olive Schreiner was an anti-war orator, a visionary and a “link in the chain coming down from Mary Wollstencraft”. When Virginia Woolf recovered from what she called “a bout of madness” in 1915, she woke up to the public madness of warfare. These writers often described and explored the “unwomanly” narrative of war and domestic violence, and the impact of these issues on humanity. They began to think ahead to a whole new society with a new way of thinking. They are all intrinsically linked. Later, Woolf said about Eliot’s Middlemarch that it was “one of the few English novels written for grown-up people”. 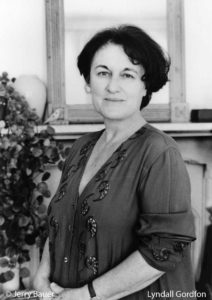 The thing I most like about Gordon – besides the fact that her mother named her after a character in Schreiner’s The Story of an African Farm – is that she doesn’t profess to ‘know’ every detail about her subjects. As Tempest points out, “she is interested in a different sort of inner-life and creativity of her subjects” and writes about the impact these famous women writers have on each other.

Tempest jokes that Woolf once wrote about what is important in life and describes how she had a visit “one September morning by spirits of delight” and wrote that “no biographer could possibly guess this important fact about my life, yet biographers pretend they know people”.

Gordon laughs. “I don’t believe in definitive biography. Biography is about the meeting of biographer and subject and that meeting will be different [for each case]. But having said that, I do respect fact.”

As I head back towards Piccadilly station, the tail end of Hurricane Ophelia whipping leaves into a frenzy, I think about these courageous female writers speaking up at a time when their voices weren’t welcome and their gender was a shackle to their literary careers. I can’t help but feel inspired.

Outsiders: Five Women Who Changed the World is published by Virago and available to buy now.