In a series of articles, Northern Soul’s Phil Pearson talks to all manner of fascinating folk about the room they use to write in, paint and do all things creative. This week it’s urban sketcher and reportage illustrator Liz Ackerley.

Nestling in the ‘Pigeon Loft’ of a former cotton mill in Mossley is the studio of well-known Manchester artist and illustrator Liz Ackerley.

The imposing building, sitting in the lap of the Pennines, was once the beating heart of the town’s cotton industry where, at its peak, 600 looms were sweated over daily. Now, artists, designers, crafters and bands (hotly-tipped Manchester band Cabbage rehearses here) all spin their creativity day and night within its yellowing walls.

Ackerley’s Liz’s Scribbles studio is on the third-and-a-half floor; a single, white-walled rectangular-shaped room with a large window at the far end. She grew up in Suffolk but has been in Cottonopolis for the past 12 years, initially based in Salford before gravitating to the mills and hills of her new home in Mossley. 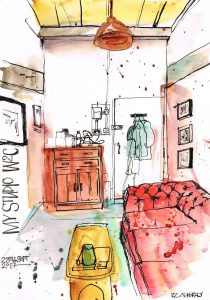 After a career as a research scientist, Ackerley trained as a landscape architect before becoming an artist. She is a member of the Manchester Urban Sketchers group and is influenced by reportage artists “who go out and capture the stories”.

While best known for her pencil and watercolour images of Manchester (“I find it so incredibly beautiful to draw”), she has recently documented her visits to a number of towns across the North of England. She is also passionate about developing her collage work.

In her own words, Ackerley describes her creative space.

“I’d been looking for a while for a studio that wasn’t massive but gave me my own space with good light and a view. The environment around me is so important to me for my drawing. This fulfils those things. It’s a North East facing room so the light is great. I don’t get direct sunlight, which is great as well. There’s not a time where I’m blinded by the light, but the light does flood into it. I have a skylight as well, so the light in here is really nice. 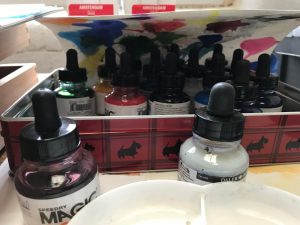 “I like working in this building. I want my own individual space but it’s nice having other people here to bounce things off and feel that you are a part of something. Doing this type of artwork is very isolating so to feel part of a community is quite important.

“Being in a former mill just lends itself to this cosmopolitan mix of artists and creatives because of the nature of the building. The rooms are not overly precious, you can make them your own. They are working rooms, which I really like. Once you close the door, it’s peaceful. It’s not like there’s no noise, you can hear other things going on, but they’re in the distance. I have thinking space in here. It’s like my drawing. I’m in my own bubble, but I’m also linked to what is going on around me.

“Often I listen to the radio. From Key 103 to Manchester local radio to Radio 4, but if I am doing something where I’m really concentrating I tend to just have music, I don’t want conversational radio. 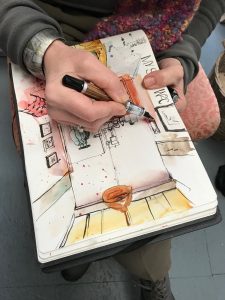 “I’m kind of organised and I’ll come in with all the things I need and when I’m finished I’ll leave it ready to get going the next day, so I’m ready. My collage work is done here using sketches I’ve done out and about. I also finish off a lot of pieces in here adding letters and building up the sketches.

“I have a working end of the room where there are two tables, one to work on, one to have the support things on that I use in the work, paints, glues etc. I’m working on a desk-top easel at the moment and I work looking out of the window. There’s a bookcase as well. All the books are drawing books, sketching books, watercolour techniques and collage techniques. I also have a hairdryer to dry the work. For me this is the place I can make things, do things. It’s a physical space that reflects my head space. There’s an energy here for working in this kind of environment because of the context of it. 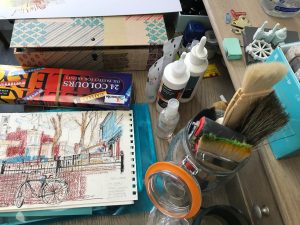 “The whole mill thing for me represents Manchester and what it’s all about, which is a strange connection I have with it. It’s not something I grew up with, but the mills are part of all that history and I like that because it makes me feel part of something. I love Manchester and its people going about their lives as the city evolves. I’ve spent time in other places like Birmingham, I don’t think I could ever get excited about Birmingham. There’s just something about Manchester. My father’s Mancunian. I feel drawn to the North. I couldn’t imagine ever living down south.

“I’m happy for people to come and visit me here. I’m not reclusive, but I do need the time to work. I see this as a place of work. I get frustrated how artists get depicted as people who take drugs, sit on floors and then produce works of art that makes them very rich. None of that seems very true of me. People say, ‘look at so-and-so artist’ and whoever, but when they were alive they weren’t very well thought of and very poor. It is important to me to think of what I do as proper work. Just because it’s something I enjoy doesn’t make it any less genuine as work.” 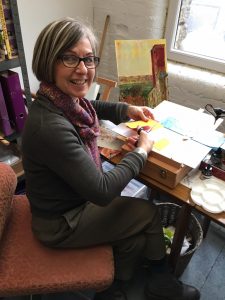 Liz Ackerley has a solo show at Chorlton Buddhist Centre from May 4, 2018 until late July