“We have to find more hopeful ways to represent dementia.” Naomi Krüger talks to Northern Soul about her debut novel, May

Margaret Brecknell August 27, 2018 Authors & Reviews, Books Comments Off on “We have to find more hopeful ways to represent dementia.” Naomi Krüger talks to Northern Soul about her debut novel, May 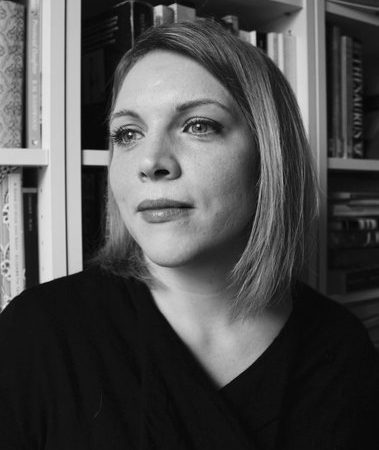 Having lost two close family members to dementia, I am interested in portrayals of this dreadful illness in literature but have often been disappointed by its presentation. For that reason, I found myself instinctively drawn to Naomi Krüger’s debut novel, May, in which the title character is a dementia sufferer trying to unlock a secret from her past. What makes this story so unusual is that the author has given a voice to the dementia sufferer.

Naomi Krüger’s day job is as a lecturer in creative writing at the University of Central Lancashire. When we met up recently near her office in Preston, I was curious to know what had inspired her to write about such a difficult subject.

“I visited an old family friend who had been diagnosed with Alzheimer’s. Her short-term memory may have been faulty, but she started asking me about things I had forgotten about from my own childhood.  Everything seemed to be flipped on its head. I became really fascinated with memory. I didn’t base the character of May on my friend, but from there I knew I wanted to write about memory and about dementia in some way.” 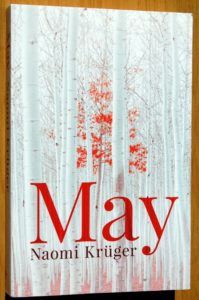 The novel tells the story of May, a confused old lady in a care home who is seemingly obsessed with the memory of a young red-haired boy from her past. The reader follows May’s thoughts over the course of a single day as she tries to unravel the mystery in her own head. But May’s story only forms part of the narrative. We also learn more about May through the eyes of her loved ones and via a young woman who works as a carer at the home. The novel moves skilfully backwards and forwards through the decades, weaving together the story of May’s own life with that of her husband, daughter, grandson and carer. The way in which May’s story interconnected with that of the other characters in the book particularly appealed to me as, in real life, it so often seems that the dementia sufferer is no longer treated as an integral part of a family or community. 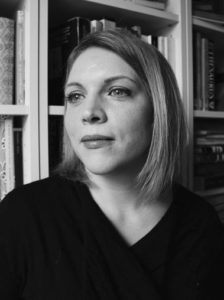 “The choice to have different voices in the book was in some ways a practical one,” Krüger explains. “It would have been hard to sustain a whole novel in such a fragmented style. However, I also wanted to portray May not as this lonely figure descending into darkness, but alongside the voices of the other characters who are struggling with their own problems.”

The theme of memory loss and searching for something that is seemingly lost forever is, by its very nature, a bleak subject on which to base a novel. But Krüger was keen to represent the whole topic of dementia in a more positive way than is often the case.

“I think we do have to find more hopeful ways to represent dementia. I didn’t want to present all the horrors and make it so bleak. On the other hand, I didn’t want to trivialise it because it affects so many people and can be incredibly painful, so that was a really hard balance. I wanted to be realistic but also show that there can be hope and moments of humour.”

Krüger has succeeded in achieving the right balance. The story of May’s personal struggle is told in a sensitive manner and even she is given her lighter moments when, for instance, she suddenly breaks into song. Her carer Afsana’s struggle to break free from the restrictions imposed on her by her family and domineering partner works exceptionally well as a supporting story to the main narrative. Like May, her struggle at times seems hopeless but, by the end of the book, there are hints that a brighter future may await the young woman. 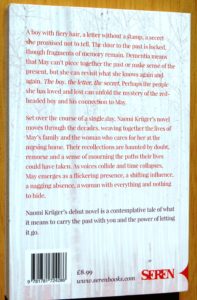 The novel is set in and around the Preston area in which Krüger grew up and still lives. This also happens to be my home patch and her depiction of the area certainly captures the essence of the place. The author admits that this was in some ways a practical choice, but also suited the background to May’s character.

“There have been several representations of dementia where the sufferer has been a neurosurgeon or an architect.  I wanted May to be someone who, on the surface, appears quite ordinary and not particularly visible but she still matters. The setting seemed right for that.”

Krüger first came up with the idea for May while still a student at Lancaster University and had to face several (in her words) “generous” rejection letters before securing a contract with the independent literary publisher, Seren Books. It was worth the wait. Kruger has produced a compelling and multi-layered story of an old lady with dementia which goes far beyond the usual stereotypical depictions of the illness in literature.

May has been recently long listed for The Guardian’s ‘Not The Booker’ award, an outstanding achievement for a debut novel. The story may well have resonated with me for personal reasons, but clearly I am not alone in being touched by this sensitive and thought-provoking book.

May is published by Seren Books and available to buy now.