Film Review: Dawn of the Planet of the Apes

David Petty November 20, 2014 Arts, Cinema Comments Off on Film Review: Dawn of the Planet of the Apes 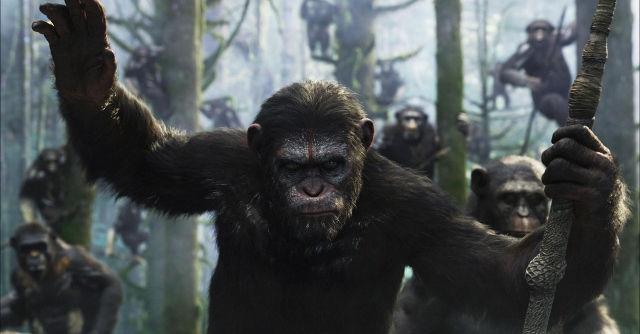 There is a moment in Rupert Wyatt‘s 2011 reboot Rise of the Planet of the Apes that stops the viewer in their tracks. A moment when a good film becomes a great one, a moment rarely seen in slam-bang, effects-driven blockbusters in these franchise-saturated times. Caesar’s guttural cry of “NO!”, symbolically breaking free of his simian roots to become more human than his caged compadres can comprehend, is a hairs-on-the-back-of-your-neck moment for any first-time viewer.

Rise was a surprise hit, a film which didn’t necessarily carry the weight of expectation that a usual studio tentpole does. The fact it turned out to be a grade-A action creature-feature with (genetically-enhanced) brains came as a shock. The fact it also came pre-loaded with the scene described above to pin cinema audiences to their seats even more so.

Thus Matt Reeves‘ sequel, for better or for worse, had a weight of expectation resting on its furry shoulders. To his credit, his film could yet be ranked alongside The Empire Strikes Back and The Dark Knight as the darker, superior picture. Time will tell of course, but, as sequels go, Dawn joyously throws out the ‘if it ain’t broke, don’t fix it’ rule of thumb many studio executives cling to in a vain attempt to keep the coffers full. It sidesteps what could easily have been a giant, Lord of the Rings-aping two-hour war-fest with thousands of Massive-driven humans and apes going hammer-and-tongs via epic CGI aerial shots, and becomes something far greater altogether.

If anything, Dawn follows in the footsteps of Full Metal Jacket as a distinct film of two halves: a slow-burning, tension-building, character study of a first half that sets up complex motivations and divisions within both the human and ape camps; followed by a grim ‘war is hell’ second half, largely eschewing the predictable circling helicopter shots in favour of muscular, boots-on-the-ground close-ups which showcase the bleak realities of conflict. This may be a film full of computer-generated apes but in lieu of recent ideological uprisings halfway around the world its message couldn’t be more resonant. 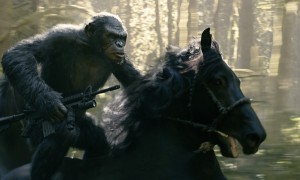 It goes without saying that in order to fully appreciate what Reeves has done with Dawn, you need to have seen Rise. This isn’t a film that spends much time with backstory, save for a brief newsreel montage explaining that the world has gone to hell in a handcart over the course of ten years due to a killer virus known as the ‘simian flu’ (in reality, an intelligence-enhancing concoction initially trialled on apes as a cure for Alzheimer’s – it worked wonders for the apes, not so much for the humans).

Said humans (led by the ever-watchable Gary Oldman) are now living in what appears to be a San Francisco tribute to The Last of Us – giant vines crawling over skyscrapers, the Golden Gate Bridge a hot mess of weeds and abandoned cars. After a party of humans in search of a dam that could restore power to the city stumble across Caesar and his pals, a fractious alliance is forged by Caesar to allow the humans to restore power on the apes’ turf. But Koba, Caesar’s hot-headed second-in-command, has a deep-seated mistrust of humans (again, if you haven’t seen the first film, get a watchin’ it now). His justifiably warped views lead him to find the rest of the human race stocking up on weaponry in case the whole fragile pact goes belly-up…and belly-up it goes. But not necessarily at the hands of us pesky humans; as Caesar tells his son with a heavy heart, apes and humans are so very much alike.

Around the halfway point, in what could be viewed as an attempt to out-do the “NO!” moment from Rise, Reeves places a camera on top of a tank when the humans vs. apes battle starts to kick off big time. Without cutting away, the turret slowly spins as all hell breaks loose, the lens acting like a first-person-shooter voyeur surveying the fire-engulfed chaos with Koba at the centre. It’s a simple but jaw-droppingly effective moment that separates Dawn from your typical Hollywood output, a film that feels truly and artfully crafted rather than churned out off the back of a surprise success to make a quick buck.

Even the fact that the majority of the apes’ dialogue is done via sign language and subtitles shows that this franchise is in it for the long game – Nolan’s Dark Knight trilogy proved that you don’t have to whack an audience over the head with dumb dialogue and huge explosions every five seconds to keep their attention when it comes to a summer genre release. Reeves has taken the gauntlet laid down by Wyatt and made a film that’s both action-packed and thought-provoking. It’s about as brave a blockbuster as you’re likely to see in this attention-deficit age. 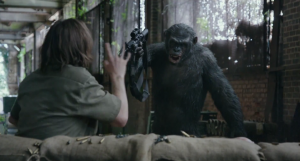 Dawn of the Planet of the Apes will be released on Blu-Ray and DVD on November 24, 2014

Tags: cinema, David Petty, Dawn of the Planet of the Apes, Film, Review