The first night of Manchester International Festival 2017 kicked off with a unique collaboration from New Order and visual artist Liam Gillick in the Old Granada Studios with So It Goes..

The band (minus Hooky and now including Tom Chapman) set themselves the mammoth task of deconstructing their past works and putting them together again, led on stage by Mancunian composer Joe Duddell and supported by a dozen students from the Royal Northern College of Music providing a kind of ‘synth orchestra’. Old Granada Studios spaces really suit these larger gigs, and it may be one of the last times we see the studios like this as the venue will soon be the home to the properly Manc-named ‘Factory’ arts centre.

Back to tonight and the first of only five gigs for New Order during this festival. On entering Studio One we were greeted with what looked like a scientific equation: ∑ (No, 14k, Lg, 17Mif) which of course translated to New Order, 14 Synths, Liam Gillick, 2017 Manchester International Festival, as well as an immersive soundscape curated by festival regular, Dave Haslam. With the threat of no greatest hits, the crowd had nevertheless grabbed every ticket and, looking around me, the babysitters of Manchester were undoubtedly very busy.

The opening track was the epic instrumental Elegia from the band’s third album, Low Life. It was then that the students were revealed to us, each one enclosed within individual white slatted boxes at the back of the stage with shutters (you knew Gillick would give you more than a mere light show), opening and closing along with the music to just give the merest glimpses of this special orchestra. 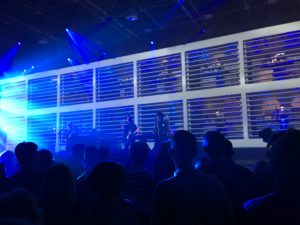 Without the more obvious tracks, the band were free to trawl through their back catalogue and cherry pick the most appropriate songs – they didn’t disappoint, reaching right back nearly 40 years to their Joy Division days for Disorder as well as more recent tunes. It’s an ambitious project, bringing together so many parts and it does work well, except when technology momentarily fails them.

Accompanying the gigs is an exhibition at Manchester Art Gallery, True Faith, which combines the legacies of Joy Division and New Order. Curated by Matthew Higgs and Jon Savage with archivist Johan Kugelberg, True Faith draws on four decades’ of work from artists such as Julian Schnabel, Jeremy Deller, Liam Gillick, Mark Leckey and Slater Bradley.

My group later debated what qualified as a ‘Light Show’ versus a ‘Light Installation’. The answer seemed to be the entrance fee. If you’re lucky enough to get a ticket for So it Goes.. you can decide for yourself. However, Gillick directs the light well – delicately intricate yet still bold enough to fill the massive space in Studio One and never overpowering the music it supported. The composition, synth orchestra, light show together with a band who seemed to be enjoying themselves (a rarity for New Order) presents a singular night out. Having watched What Is The City earlier, I’m looking forward to the weird and wonderful experiences that  #mif17 has for us.