Manchester Theatre Award-winning collective Take Back Theatre, set up by actress Julie Hesmondhalgh, writer Rebekah (Becx) Harrison and visual artist Grant Archer in October 2015 as “an artistic response to the politics of austerity” has proved to be an astonishing Northern powerhouse of political theatre in its two years of life. BE//LONGING, though, is a remarkably ambitious project even by its standards.

A collaboration with Manchester University’s recently-launched Migration Lab and the forward-thinking venue Hope Mill Theatre, BE//LONGING is a thoughtful, yet deeply emotional multi-media theatre production, using installations, music, art, video and scripted theatre to create an unapologetically provocative experience that boldly addresses perceptions of migration, helping to expose some of the myths that surround this most emotive, vital and current of topics.

The flagship production in Migration Lab’s plan to use writing, theatre and live events to inform debate in local, national and global communities to support and communicate its work, the 40-minute theatre piece penned by Harrison is a thoroughly involving dramatisation of some of the findings of the Lab’s research. Directed by Matt Hassall, it tells real people’s stories of migration, in the process exploring borders of all kinds, from the physical act of crossing a border to everyday borders and what it means to belong. By the nature of the many stories it overlaps, it’s a dizzying, revelatory, sometimes contradictory, mostly moving experience, with actors Nadia Emam and Darren Kuppan rising bravely to its challenges. 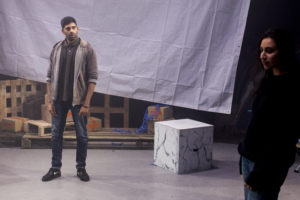 Throughout the run, Hope Mill has been transformed to resemble a warehouse on the edge of a border. After making their journey to the theatre, audience members reach an arrivals area where their tickets are checked and processed, before they receive a map and cross the border to BE//LONGING.

Throughout the space, ten phone installations play stories of migration, taken from Migration Lab’s research and other volunteered accounts, recorded by actors. Meanwhile, installations in the bar include scripted recordings written by Becx and Ian Kershaw telling stories of van drivers and refugees in Calais, performance poetry on sea rescues by Louise Wallwein and an art installation by Matilda Glen who volunteered in Calais. Other installations include art from Sophie Mahon, Casey Longden, a photography exhibition from Danika Jurisic, Take Back’s Under Canvas, and a piece from Rethink Rebuild, a charity supporting the Syrian Community, while another installation explores newspaper reportage as part of which copies of ‘Not The Fake News’, produced by Cathy Wilcock and Manchester-based asylum seekers and journalists, are available.

As sprawling, overwhelming, uneven, bewildering and significant as its subject matter, BE//LONGING is a remarkable achievement by any standards.

BE//LONGING is at Hope Mill Theatre until November 4, 2017. To buy tickets, click here.