Technically, this year’s Bluedot festival kicks off with a few performances on the Thursday night, but for Northern Soul, as for many other folks, it starts on arrival around teatime on the Friday. Unfortunately, so does a biblical downpour that’s rumoured to include cyclones just up the road. Thereafter, rainfall pops up occasionally throughout the weekend, but the site never really recovers, doubtless exacerbated by the fact that attendance is significantly up on previous years. It’s no-one’s fault but there is mud and there is trudging. It’s slow, careful work getting around the site. In fact – fittingly, as it happens – it’s quite like walking on the moon.

Because by accident or design – this is Bluedot’s fourth year, after all – this weekend falls at the same time as the 50th anniversary of the Apollo 11 Moon landings. No-one’s pretending that Jodrell Bank played a huge, direct hand in that, other than tracking transmissions, but it’s still the perfect spot to celebrate the occasion and it provides a neat hook on which to hang this year’s proceedings. Indeed, this is something that Bluedot extremely well. It knits together as a whole in terms of ethos and theme, rather than feeling like a load of random bookings slung together within the same site. Bluedot puts the emphasis on science, with related talks and screenings, as well as the big music acts delivering electronica of some kind. There’s an internal logic and structure to it, and that’s science for you.

Across the weekend, some artists hit the spot more than others. On the main Lovell stage, Kate Tempest may not offer anything more visually engaging than a woman accompanying her on a stack of keyboards, but her delivery of songs such as I Trap You, Hold Your Own and People’s Faces is so passionate and mesmerizing that it seems perfect just after that apocalyptic downpour. Hot Chip are livelier, with a big light show and much leaping about, but for all their pop smarts their set feels flat in comparison. Later, TOKiMONSTA rocks the Orbit tent with a marvy A/V set, with impressive fractal projections accompanying a blend of her own material including Smoke & Mirrors and the likes of Missy Elliott’s Get Ur Freak On. 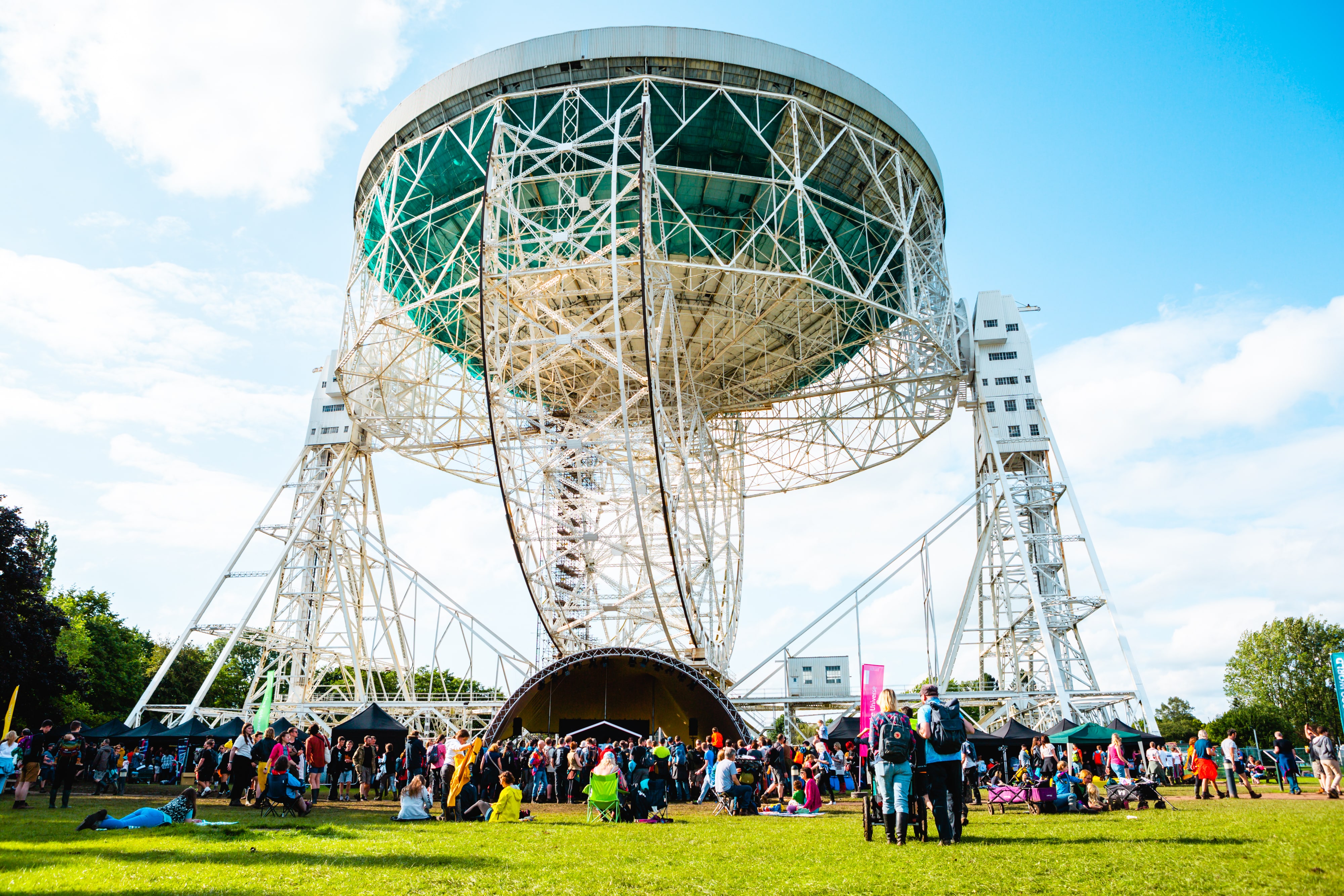 On the Saturday afternoon, the weather starts to buck up its ideas just as Henge take to the main stage, which surely can’t be a coincidence. Elaborately dressed as space aliens and robots, Henge are the Sun Ra Orchestra by way of the Bonzo Dog Band, lifting everyone’s spirits at just the right moment with daft, turbo-charged songs about cosmic catastrophes and the joys of water. The band pop up elsewhere throughout the weekend, DJing and teaching their dance routines over at the Deep Space Disco area, until their song / chant Demilitarise, its lyrics emblazoned on the t-shirt sported by a good many punters, seems to become the very pulse of the festival. Shortly later, the Easy Star All-Stars deliver their dub version of Pink Floyd’s Dark Side of the Moon, which is agreeable enough, but all told it’s not much more than mildly diverting.

As night-time starts to draw in, Jarvis Cocker appears for a set on the Lovell stage in the kind of guise of his new band outfit. Jarvis Cocker is a beloved figure and it could never be anything other than a pleasure to see him, but beyond a couple of Pulp era b-side (Space and His ‘n’ Hers, bri-nylon fans) everything here is from his solo career, and to be frank, it’s forgettable, navel-gazing stuff. Cocker has always been big on navel-gazing, but in his heyday it was delivered with winning wit and top tunes, whereas this has neither – including, it seems, his yet-to-be-released stuff. It’s striking that Serafina Steer, a recording artist in her own right, is front and centre in the band. Between ourselves, these days Steer’s songs are loads better than Jarvis’s. 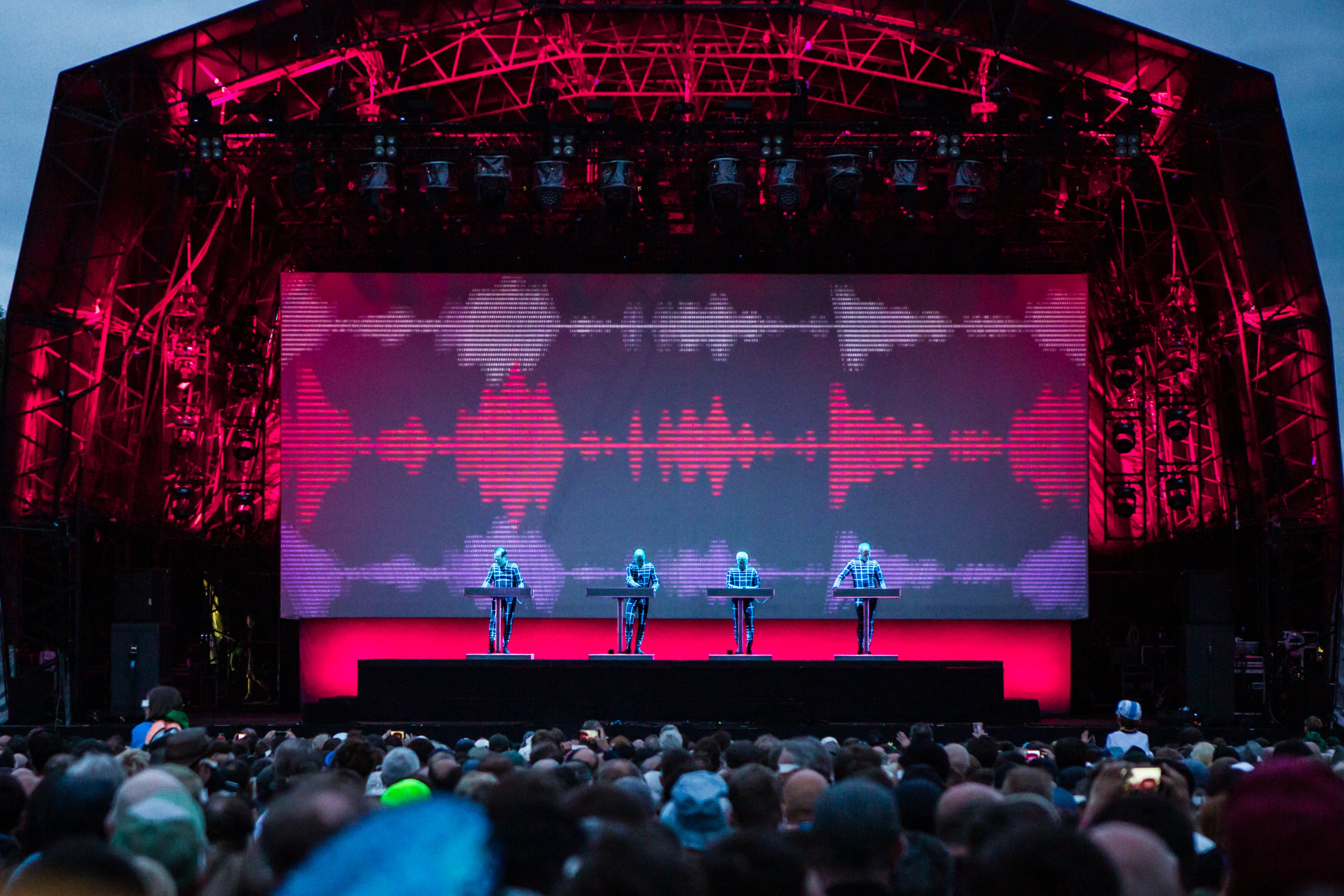 Headliners Kraftwerk fit into the Bluedot ethos perfectly, even going so far as the Jodrell Bank radio telescope making a cameo appearance during one of their 3D projections. The hermetically sealed perfection of Kraftwerk’s sound makes it hard to judge one show from another, but there’s no disputing that their deadpan playfulness and peerless techno-pop, from The Model and Autobahn to Computer Love and Tour de France, go down a treat. It’s a mighty, iconic set.

As with any festival, some of the most special moments are to be discovered away from the main stage, off the beaten, muddy track. This year there’s a screening of Georges Méliès’ A Trip to the Moon with a rousing live accompaniment by Stem Collective, a packed presentation of John Robertson’s nutso live-action comedy text adventure The Dark Room, and a delightful, gently insightful talk by unassuming ex-Jodrell Bank monitoring engineer Bob Pritchard, chaired by current head honcho Tim O’Brien. There’s also the Luminarium, an annual fixture which could be described as a walk-in bouncy castle-cum-trippy, colourful art installation which offers calm respite from the hustle and bustle 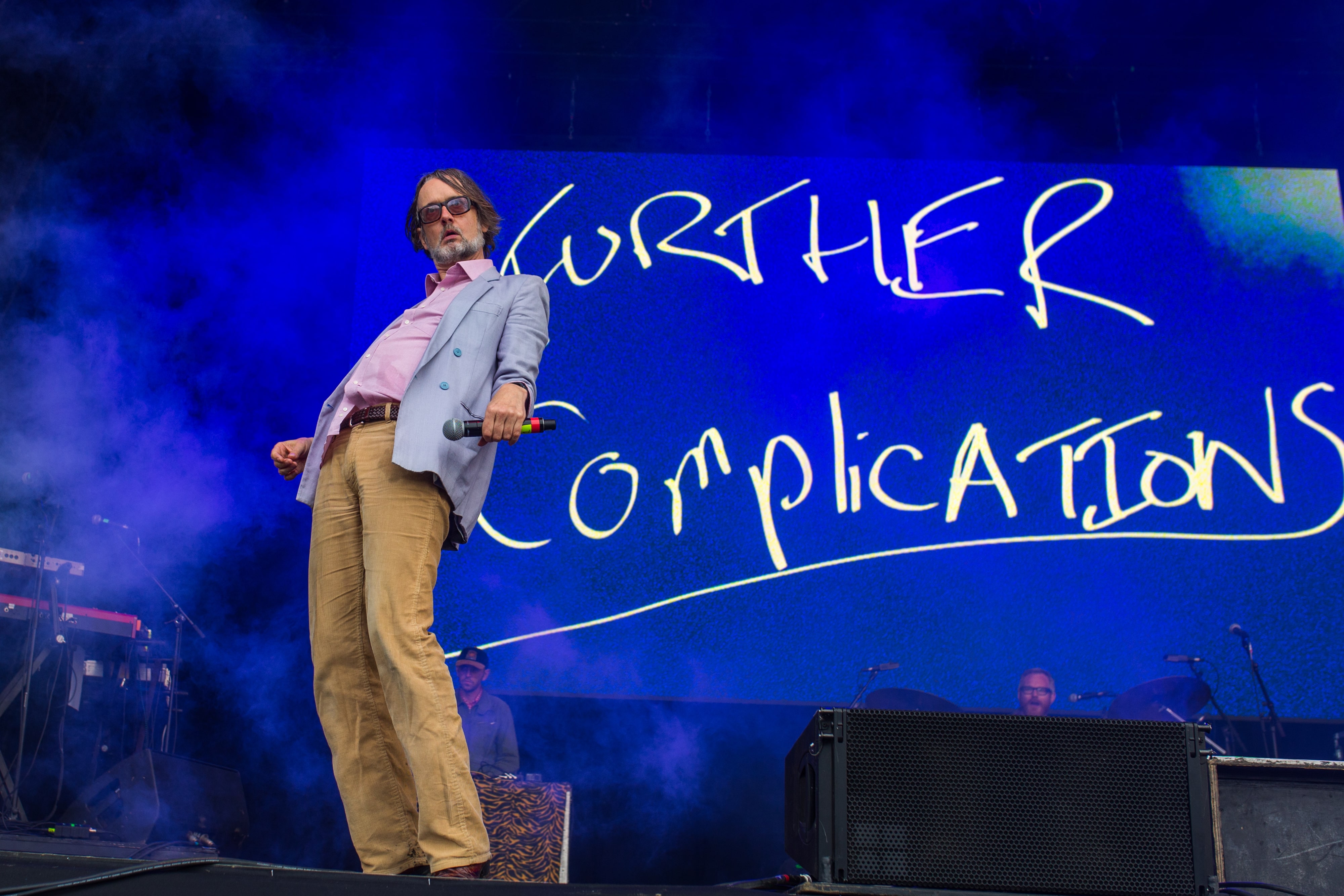 Likewise, over on the Roots Stage, Zee Guveya and the Heritage Survival Band bring a hugely refreshing blast of joyful Zimbabwean music for the jaded palate, while on the Nebula Stage, Parisian indie outfit Juniore pull off one of the weekend’s copper-bottomed highlights with an effortlessly cool and groove-driven set, taking in Manifique and Ah Bah D’accord, which unites everyone present with thumping euphoria.

On the Sunday, The Orielles get a main stage slot, replacing the Go! Team due to unforeseen pregnancy, which is nice. Their angular post-punk sound doesn’t quite win the day, but they’re certainly spirited in the way that they rise to the occasion. Later, Anna Calvi has much fine material, but it’s smothered in too much shouting and widdly-wee guitar for a broad audience standing in a big drizzly field. 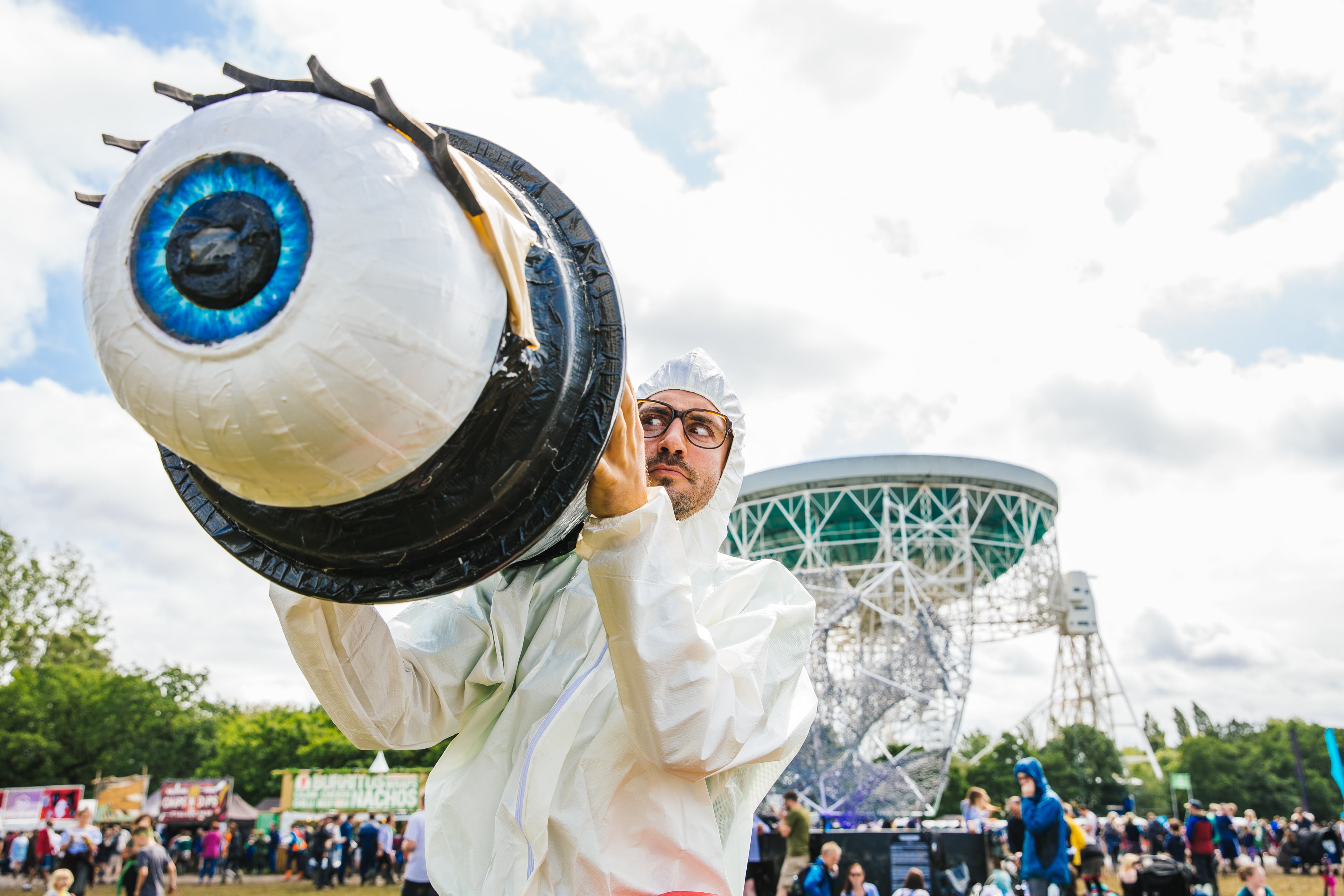 New Order manage to end the weekend on a high, with Bernard Sumner responding to the fact that it’s bloody raining by remarking “Hello Bluedot! It’s bloody raining.” Their set covers recent material – Singularity, Plastic, Tutti Frutti – plus older favourites such as True Faith, Bizarre Love Triangle and Blue Monday. There’s a relatively deep cut in there – Your Silent Face from 1983 – as well as a clutch of Joy Division songs, culminating in an encore of Atmosphere coupled with Love Will Tear Us Apart. Their visuals are impressive and though the much-discussed lack of Hooky strips some of the showmanship from their performance, they certainly know what they’re doing. It’s all achieved with well-judged skill and spirit, even genuine schmaltz-free tenderness when the Joy Division songs are played as images of Ian Curtis appear on the backdrop.

With Festival No 6 seemingly gone for good, Bluedot looks set to assume the position of the North’s most expertly tailored music festival, and this year’s incarnation only deepens that impression. The 2019 line-up will be hard to top, and the bespoke on-site contactless payment system seemed to work fine, though increasing on-site capacity further still would seem to be a bad move. Soggy or not, Bluedot pulled it off, right down to the night-time Apollo 11 projections on the radio telescope complete with archive discussions between the astronauts and NASA mission control over the speaker system. It’s unexpectedly soporific, perfect for when sleeping under canvas, and it’s likely a few festival goers got so used to it they were seeking out the footage on YouTube once back home.