As I wait in bar at the Opera House in Manchester, clutching my tiny bottle of wine and enjoying the novelty of attending the theatre alone, the thing that strikes me the most about the audience is its variety.

There aren’t many productions capable of attracting such a diverse crowd. From families wrangling with young children to couples and coach loads of theatregoers dressed up in their finest, they are all here. I people-watch for a bit and eavesdrop on the animated story-telling of the older gentlemen standing next to me who is regaling his companions with wartime stories.

I am here to see the latest production of Goodnight Mister Tom by prominent children’s playwright David Wood.

The novel is one of my favourite children’s books by author Michelle Magorian. Set in Turville, Buckinghamshire, it tells the story of William Beech, a boy from Deptford physically and emotionally abused by his mother, who arrives at the home of Tom Oakley, a widow in his sixties who lives in the village of Little Weirword. What ensues is not only a heart-warming tale of love and what it means to be a family but an accurate and, at times, heart-breaking account of life as an evacuee during wartime Britain.

Wood, a dab hand at adapting children’s novels for the stage whose impressive resumé includes Babe The Sheep Pig, The BFG and The Witches, stays true to the original tale. An advocate for keeping the essence of the original tale – “If the story is strong enough to adapt,” he says in an interview included in the programme, “why muck about with it?” – Wood does Magorian’s much-loved tale proud. 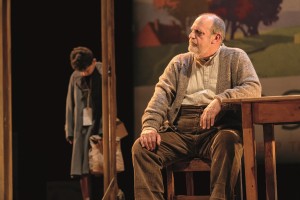 The set design is simple yet effective. A painting of a church and graveyard hangs in the background throughout most scenes, highlighting the importance of themes such as religion and death. The most poignant parts of the play are where war songs such as Wish Me Luck As You Wave Me Goodbye are weaved through the narrative, as well as quotes from the Prime Minister’s speech of how Britain was at war with Germany. The silence of each character is powerful and the sense of ominousness is captured perfectly.

Alex Taylor-McDowall plays the young William Beech and he is superb in his portrayal of a young evacuee starved of love, affection and acceptance. From the first appearance of Taylor-McDowell, standing at the door to Oakley’s home, head bowed, knees bruised and sore from his mother’s brutal punishments, the young actor accurately captures the essence of a child catapulted into an unknown world.

The late actor John Thaw will forever be the Mister Tom I hold in my mind when I think of the novel, but David Troughton excels in his portrayal of the grumpy widower at first reluctant to take in a child who, as time progreesses, grows into a caring and loving father figure. Through looking after young Will he learns more about himself than he has done in the 40 years since the death of his wife and son. Teaching the boy to read and write as well as stand on his own two feet, the pair trade off valuable life lessons and become father and son.

The inclusion of puppetry to represent Oakley’s dog, Sammy, is a brilliant touch and, as I glance around the theatre, I notice children and adults are delighted by the addition. Once you forget there is a person behind the puppet, the animal comes to life and we believe the sniffing and growling is coming from the dog, not the puppeteer who blends into the scenery. There are squirrels and birds too, but Sammy is the true crowd pleaser. 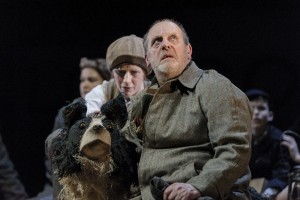 For me, the stand-out performance of the evening goes to Oliver Loads for his hilarious portrayal of Zach, my favourite character from the novel. Will’s first friend, and constant companion, Zach is both the comic heart of the play and an absolute tragedy prompting young Will to come to terms with loving and losing people who are dear to him. The performances by the whole cast are solid but it’s the children who steal the show.

Wood is clever in his treatment of such sensitive subject matter. At its core, Goodnight Mister Tom is a heart-warming tale, but it also deals with some tough and delicate topics such as abuse and loss. Death is interspersed throughout the narrative – a telegram bringing news of the death of Miss Hartridge’s young pilot husband, the tears George spills for his brother killed in action and the ever-prominent graveyard where Tom’s wife and son are laid to rest. These moments are hard to sit through. The actors provoke real emotion from their audience and there were more than a few audible sobs.

At times the narrative seemed drawn out. The first half of the show starts slowly but once the performers are all introduced and the story starts to unfold, the pace picks up. A number of significant events take place in the novel and most of them seem to be packed into the faster paced second half.

Nevertheless, this is a fantastic piece of theatre. Just make sure you’ve got the tissues handy.