Review: Northern Soul heads to (a rather muddy) Festival No 6 in Portmeirion, North Wales

The village of Portmeirion was created in 1925 (and finished in 1975) under the aegis of architect Sir Clough Williams-Ellis who thought it would be a wheeze to conjure up a little bit of Italy on the North Wales coast. The whole place is a monument to eccentric creativity for creativity’s sake, and you’re not likely to find a neater metaphor for the idea of holding a late summer festival there. It’s not all plain sailing but, at best, Festival No 6 does manage to live up to that as a manifesto.

It’s a weekend built of surreal, lyrical moments: Chic drummer Ralph Rolle making a jumbo batch of cookies as an artist sits constructing a Patrick McGoohan mosaic out of broken vinyl, or Simon Armitage standing to recite a poem as a group of performers dressed as bees walk along a pathway above him, frantically blowing kazoos. Any festival is a careful blend of canny programming, careful organisation and sheer serendipity. If you’re lucky, magic happens, and it does so here on a pretty regular basis. For example, Armitage reading his poem Rain actually manages to stop a downpour.

But before we go any further, there’s a certain matter than needs mentioning, though obviously it’s no fault of the organisers. North Wales is a beautifully leafy, green part of the world, and there’s a simple reason that it’s so leafy and green: it rains a hell of a lot. Sure enough, it precipitates it down for most of the Saturday and Sunday, and much of the weekend comes with an accompanying soundtrack of the rustling of free plastic ponchos. Credit where it’s due, the festival copes with this well, not merely by handing out said ponchos but also by getting busy with woodchip-laden diggers. After last year’s horror stories of motorists being mudbound in the Park & Ride car park, a new location with improved drainage has been found and our exit was indeed trouble-free. That’s not to say that the campsite, which slopes at an alarming degree, wasn’t an almighty pain in the arse in these conditions. But it’s hard to know how to work around that – unless perhaps the use of fields could be swapped about, and entrances rethought entirely. 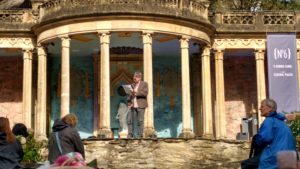 This year, Festival No 6 has gone mad for a bespoke phone app which lists the very latest schedule updates and sends alerts 15 minutes before the start of any set you’ve favourited. It’s an intriguing development, albeit a little too like being in The Prisoner. The app schedules aren’t as up-to-date as they could be, which rather defeats the object.

Portmeirion village hosts an array of spaces and stages, boasting a first-rate arts and culture programme, with bands playing nearer the beach or tucked away in the woods above. Six years on, though, the festival layout is still evolving. Some spaces have been rejigged or relocated. One of the more water-tight innovations is that the Tim Peaks Diner – as in Tim Burgess rather than that astronaut guy – has found a new home a mere stone’s throw from the main stage. It’s not a perfect performance space – there’s a stage, but no rake whatsoever and it’s constantly full of folk sitting drinking coffee and beer – but it does have a pleasant atmosphere and is always an interesting place to hang out. 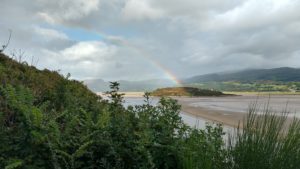 Crucially, though, the main Castell Park field feels like a different world from the more cultured goings-on in Portmeirion village itself. Variety is the spice of any festival, obviously, but it’s more than that. There’s a disconnect between the two, when it should at least feel as though they belong together. There’s no changing the site’s geography, but might it be possible to increase the collaboration and cross-fertilisation between them somehow? The main stage remains a strange set-up, with no acts on until mid-afternoon and a weird lack of continuity. The line-up there is certainly starry – Laura Mvula, Bloc Party, Rag ‘n’ Bone Man – but weirdly slapdash. There doesn’t seem to be an overarching ethos beyond them being the more well-known artists. Essentially, it’s the one part of the festival that lacks a strong, clear identity, when it could do with being its beating heart.

Some of the acts playing the Grand Pavilion tent just across the way – Kate Tempest, Public Service Broadcasting, Charlotte Church’s Pop Dungeon, The Cribs, Arab Strap – drew large crowds and really deserved to be out front and centre. 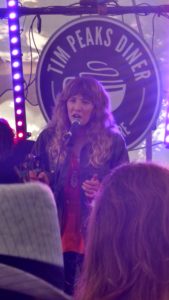 So, how about running the main stage all day and giving some of those comparatively ‘smaller’ bands exposure to a bigger audience? Or how about getting some of the arts and culture guests from over in the village to introduce main stage acts, or even letting them DJ inbetween acts? A sprawling feast of options is all well and good, but No 6 needs a little more cohesion.

To the acts themselves, then. Honeyblood impress with their melodic racket and the young lads of Cabbage manage to brew up genuine, edgy thrills with songs such as Fraudulent Artist and Terrorist Synthesizer. Their debut album is now on the horizon, and if their furious energy can be channelled into recorded form, it’ll be something to get excited about.

At [cough] the other end of the age range, the Brythoniaid Male Voice Choir, now No 6 mainstays, make an irresistible, soaring sound, and even their cover of Skin by Rag ‘n’ Bone Man manages to sound heartfelt and powerful rather than throwaway. In the intimate setting of Portmeirion Town Hall, Dutch Uncles deliver a short, specially orchestrated set with an accompanying string quartet. Their recent songs such as Achameleon and Big Balloon really suit this treatment, and sound at home here. Similarly, Simon Aldred, aka Cherry Ghost, closes the weekend’s proceedings in the village itself with additional orchestration lending a lush, romantic, countrified feel to his songs.

Of the main stage sets, Mogwai’s instrumental attack manages to become rather wearing over time, while the Bootleg Beatles, with the Liverpool Symphony Orchestra in tow, pull off a live performance of the whole Sgt Pepper album which is never less that entertaining, yet which begs the lingering question: why bother? Closing the festival on Sunday night, The Flaming Lips are evidently highly adept at drawing in an open-air crowd. Songs like Race for the Prize, Do You Realize?? and a touching cover of Bowie’s Space Oddity are perfect for a big old singalong and the band have an arsenal of visual tricks to go with them. It’s just a shame that, due to the inclement weather, singer Wayne Coyne balks at his traditional spot of crowd zorbing, particularly as it would have been a neat nod to The Prisoner’s big, bouncing Rovers. (While we’re on the subject, of the three assorted brass bands performing over the weekend, not one did a cover of Ron Grainer’s brassy Prisoner theme. Seriously, what’s that all about?). 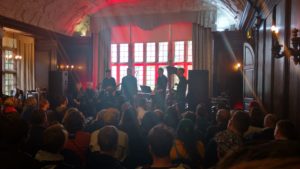 The covered Castell Gardens DJ area plays host to some big names over the weekend, from Jarvis Cocker to, um, Steve Davis (who reveals, during an ‘in conversation’ appearance elsewhere, that his 80s snooker wins were fuelled by backstage listening sessions taking in Magma and Frank Zappa). Perhaps the most striking moment here comes when Kevin Rowland of Dexys plays a whole raft of floor fillers from Beginning of the End’s Funky Nassau to the Average White Band’s Let’s Go Round Again. What’s remarkable is that Rowland is equipped with turntables and a microphone, and often joins in with the records he’s playing. Obviously that could go either way, but Rowland’s live vocal performance of Groove is in the Heart is actually something pretty special. The crowd loves him for it.

In practice, most of the truly memorable performances of the weekend tend to be off the beaten (and, well, really muddy) track. Late on Saturday afternoon, the dinky Lost at Sea bandstand area plays host to folksy harmony duo Lucy & Virginia, who then join Mancunian singer-songwriter Matthew Gray and others to perform as The Awful Truth. Gray’s wry, world-weary songs have a touch of Jake Thackray to them, which is never a bad thing. Neither set is exactly a showstopper, but they’re both warm and genuine and manage to hit the spot at the time. Palpably, these are musicians playing for the sheer love of it, because they just can’t help it rather than because their management have advised them to, and that enthusiasm is highly infectious. 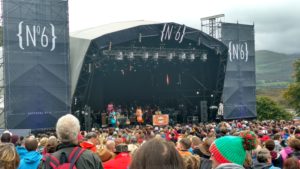 The same goes for a couple of turns on the seated Gatehouse stage – by day, a venue for talks (and for sheltering from the rain to eat a bacon butty); by night, home to an impressive conveyor belt of cabaret acts. Somewhere in the midst of this, the cherishable Lovely Eggs play a set to a projected backdrop created by video artist Casey Raymond under the banner ‘The All-Seeing Magic Eye Bath’. For good measure, the Eggs perform while wearing papier mâché space alien heads. This doesn’t prevent them from giving some proper welly to songs such as Magic Onion and Goofin’ Around, though, and the whole tent is positively jumping.

An unexpected highlight of the whole weekend, though, was Mik Artistik‘s Ego Trip, who performed nightly in the Gatehouse. At 62, Leeds lad Mik has built a formidable reputation on the live circuit, and with good reason. From Plastic Fox and The Lights are On to Cheap Watch from the Market and She Looks Like Me Mam, his songs take an almost unhinged look at daily life, managing to be both memorable, unsettling and very, very funny. The energy that he throws into his sets is something else, and again, there’s that sense of pure, eccentric creativity being given a platform just for the hell of it.

Yes, Clough Williams-Ellis would have been proud. Well, that or slightly bemused.