In 1981, Roy Hattersley, then Shadow Home Secretary, made a short film for Yorkshire Television about the Sheffield in which he grew up. It’s free to view on the British Film Institute’s website, and though it appears to have been intended as a nostalgic rumination by a local lad made good, it’s also an evocative snapshot of a time when subsidised bus fares may have been hilariously cheap but the city’s back-firing journey into the future felt as though it might terminate at any moment.

It undeniably catches Sheffield at a bad time. Its pavements are bruised, its grand civic fountain is litter-strewn and dead. As Hattersley surveys the city and talks about cricket and football and steel, along with memories of his early career as a rising star on the city’s Labour council, his bittersweet thoughts turn to his period as chairman of the local housing committee. This is not the stuff that Hollywood biopics are made of, it’s true, but he and his housing colleagues had once been municipal pioneers. By the time of the 1981 film, however, he was clearly less certain about what they achieved. 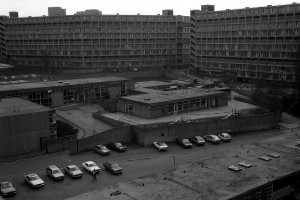 The decisions made by Hattersley and his associates in the 1950s and 1960s – along with their equivalents in councils up and down the country – changed the physical environments of our cities in ways we can now hardly imagine. Though we are well used to redevelopment and the popping up of buildings where previously there were none, it’s still difficult to truly appreciate the sheer scale of that post-war slum clearance and reconstruction.

In the space of ten years in Sheffield alone, they built Hyde Park and Kelvin Flats, Norfolk Park and Gleadless Valley – all immense in scale and visionary in nature. These were far more than just a few tower blocks. Instead, they were sweeping masterplans for a city of the future; they represented nothing less than a conception of a new way of life.

And there was Park Hill too, now the most celebrated of the lot with its Brutalist blocks coiling like concrete serpents across the hillside above Sheffield station. Hattersley visits Park Hill in the film, chatting to residents who recite tales both good and bad. Though he does his best to talk himself round to a professed sense of pride in the idealism that drove construction, the inescapable sense is that, by 1981, Park Hill and its ilk had gone seriously wrong.

They had gone so wrong, in fact, that many such developments were demolished barely 20 years after completion. Not Park Hill though. It remains in position to this day, now Grade II* listed, preserved not only as a reminder of what people once believed the future would look like, but also as a renovation-in-progress: a semi-abandoned, semi-rebuilt place where a spartan population will soon swell to enormous size. That’s the idea at any rate. The developers Urban Splash have been working on Park Hill since 2004, but though some sections have been spectacularly renovated, there remains a huge amount of work to be done. Watch this space, as they say. 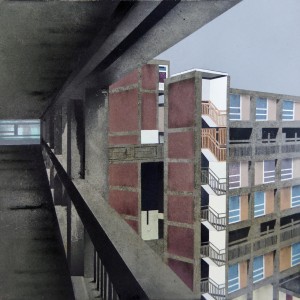 Funnily enough, for some people, watching the space at Park Hill has become more than just a way to pass the time while standing on platform 8 at the station or climbing up the hill from the tram. For the artist Mandy Payne, whose painting Broken Brutalism has just won the £10,000 Valeria Sykes Award at the New Light Prize Exhibition, the interlocking concrete decks at Park Hill – the “streets in the sky” designed to engender close-knit communities just like the slum streets that were swept away – have become akin to Monet’s haystacks or Cézanne’s Mont Sainte-Victoire. In their angular, shadow-shifting way, they replay the acts of walking and looking over and over again, enabling her to create urban views that are bleakly modernist and yet also seem touched by a creeping melancholia.

Although Payne only began painting Park Hill a few years ago, it is a place she has long been aware of, “even as a child, when my dad worked in Sheffield”.

She says: “I worked in Rotherham for over 20 years and would pass it daily on my way to work, and in recent years noted its regeneration and metamorphosis with interest. I think I knew that it was something I wanted to investigate further, and the more I explored the subject, the more I got drawn into it.”

When Roy Hattersley made his Yorkshire TV film, the social problems at Park Hill were perhaps too current to enable the development’s architecture to be viewed in such an objective way, but today the prevailing opinion in Sheffield (and elsewhere) seems to have changed.

“Over the past year or two there seems to have been a definite upsurge in interest in Brutalism, with the National Trust doing guided tours around Brutal utopias such as Park Hill, the Southbank Centre and the University of East Anglia.” 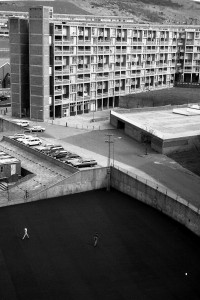 or her own part, Payne loves Park Hill’s Brutalist architecture – “the sheer scale of the place, its ingenious design, how it snakes its way into the landscape” – and though there are substantial renovated sections which make their way into some of her paintings, she says “it’s the old parts that I’m particularly drawn to, where the concrete is all stained, spalled and unloved, and the memories and layers of the past are almost tangible. My aim was to try to create observational paintings that spoke of the displacement of the established communities and the temporality of urban landscape.”

Winning the New Light Prize appears to bear out Payne’s observation that Brutalism is having a moment in the sun, though perhaps a moment in the drizzle would be more appropriate for this most leaden of architectural styles. The win comes on top of being shortlisted for last year’s John Moores Painting Prize, and runner-up in the John Ruskin Prize, also in 2014.

Each prize has its own remit, with the New Light version being dedicated to art from the North. Payne speaks with evident pride about Sheffield, the city she moved to in 1988.

“I love it and regard it as my home, both my kids were born here. It’s a great city and just gets better. Really friendly people, vibrant art scene, beautiful countryside on the doorstep, what more could I want?”

So does she discern an identifiably Northern quality in her work?

“I hope so as I’m very proud of my Northern roots. I was brought up on the outskirts of Bradford and went to the universities of Manchester and Leeds for my dental degrees prior to studying Fine Art in Nottingham, so I’ve lived most of my life up here.”

She recognises too that Park Hill as a subject is unique to Sheffield, although other grand concrete schemes were appearing all over Britain at the time it was built.

“It has fairly distinctive architecture with its walkways but I guess some of the spaces I depict from the estate are similar to other Brutalist structures.” 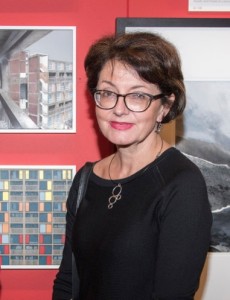 Although Payne works in a range of media, many of her prize-winning pieces share a mode of construction that is particularly apt considering her Brutalist muse. Broken Brutalism, the work that won the New Light Prize, was made using aerosol paint on a slab of concrete, a method that references the graffiti so familiar as ad hoc decoration throughout our inner cities, while also giving the piece the unmistakeable cold, grey skin so beloved of post-war civic architects. It’s an inspired way of working, but one that took considerable time to get right.

She explains: “There have been a few challenges along the way with it such as trying to find supports and moulds to hold the concrete to cast it, then getting the cast concrete out of the mould in one piece. The work started as part of my degree course. The first one I made, for an assessment, broke in transit to Nottingham so I then experimented using a wire mesh to give the concrete more support. Since then I’ve come across a company that has made me some vinyl moulds which means I can basically make the equivalent of a concrete tile which I can then use as a concrete canvas.”

As Urban Splash’s renovation work at Park Hill gets back up to speed following a slowdown caused by the global slump, and high-profile new residents continue to move in – including Warp Films, the makers of This is England, Four Lions and ’71 (which used Park Hill as a stand-in for Belfast’s Divis Flats) – Payne’s paintings are capturing a structure in a state of transition.

This is particularly evident in her piece Betwixt and Between in which the vividly coloured panels of a renovated block contrast with the stained concrete and brick of its untouched sections (see main image). This is a vision of Park Hill that Roy Hattersley and the wider city of Sheffield would have found hard to imagine back in 1981 – that there would ever be a time when the development’s problems would begin to make way for optimism and hope. But though fingers are crossed for its future, the size of the task ahead is such that a walk round Park Hill can still feel like strolling through a parallel dimension. 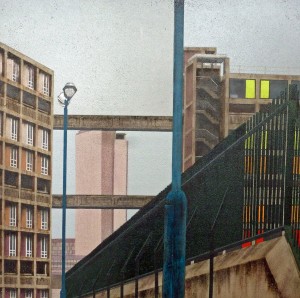 “It’s a strange place at the moment,” says Payne. “Nearly all the old residents have gone now and everything is boarded up. However the nursery is still running so as you walk around what appears to be a ghost town, you have a background cacophony of the sounds of kids playing – new life – which is slightly surreal.

“It’s changing all the time. Whenever I go down there, another bit seems to be boarded up or altered. Part of me is sad to see it change and I wonder how long I will be able to access the space. Urban Splash have done a great job in regenerating the area, in bringing in new businesses, but I wonder how long it will take to develop it all. I also feel sad that it was originally built for social housing but now only a third of it will serve that purpose, and I wonder how the new mix of private owners and housing association tenants will work? I hope it does.”

If Park Hill and its awesome-yet-delinquent concrete brethren teach us one thing, it’s the difficulty of laying rigid visions for living over the chaos and complexity of real lives. But where the structures have survived, our hoped-for utopias could yet become places where people simply get on with things – shorn of 1960s idealism perhaps, but no less valid for all that. Either way, Mandy Payne’s paintings will be here to remind us what it felt like to stand on those deserted decks in the early years of the 21st century, before the people came back in numbers but before the dereliction was wiped from our minds.

In 1981, when Park Hill’s future looked impossibly bleak, Sheffield’s one-time housing chairman, Roy Hattersley, said: “It was by building this way then, at this speed and in this style, that we were able to clear the slums and end the waiting lists. Looking back, it might have been the wrong thing to do. But I’m sure it was the right thing then.”

He sounds like a man trying to justify a terrible mistake. But let’s hope that nearly 35 years on from that statement, it was the right thing to do for our future too.

The New Light Prize Exhibition runs at the Bowes Museum, Barnard Castle, until February 7, 2015, then tours to the Mercer Gallery, Harrogate, and the Panter & Hall Gallery, London

How the Northern Soul team is feeling after months of lockdown... @AmazingMorph pic.twitter.com/ZksJRlrh1L