The Arts Council likes to talk about hard-to-reach audiences, says Rosie Freeman, director of The Brick Box, an arts organisation which has relocated from London to Bradford.

“We find we have hard-to-get-rid-of audiences,” she adds. “People stop, come in, tell us their life stories, ask lots of questions and introduce us to their next-door neighbours.  We have immersive experiences. We are creating art together rather than showing them what art should be. We have built a big audience and Bradford is in the national spotlight a lot more.”

Freeman and her fellow director Eleanor Barrett moved their community interest company from the capital to the former industrial powerhouse in 2016, attracted by the DIY ethos and vast potential of the city centre’s underused spaces in heritage buildings. It was a homecoming for Barrett, who grew up in the city. 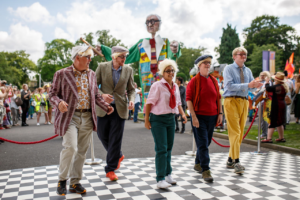 Their reimagining of the empty Marks & Spencer department store in Darley Street as a pop-up cultural venue called Wild Woods was a commercial and critical success, even if there were a few grumbles in the comment sections of the local newspaper.

“Someone posted ‘the hippies are going nuts again’ about our Wild Woods event,” Freeman says. “Someone described another of our events as ‘women with coloured hair finger-painting’. One person even said it was ‘a waste of lives’.

“We are taking people out of their comfort zone. We are stimulating the local economy, driving footfall to the city centre and creating jobs. We are utilising empty spaces indoors and outdoors for trial commercial use.

She continues: “Arts and culture modify people’s behaviour. People think twice about dropping litter because they can see something is going on. As a result of the stuff we are doing, people feel differently about their city.”

After a dozen Wild Woods events and a major celebration of the Bradford-born artist David Hockney’s 80th birthday, the latest project is The Brick Box Rooms, a temporary residence in the city’s oldest street, Ivegate.

The company has taken over the former Smith & Co butchers, once famed for its Christmas stand pies, and is using the space for exhibitions, spoken-word nights, pop-up restaurants such as Sonia Sandhu’s vegan Indian food, supper clubs and live music. 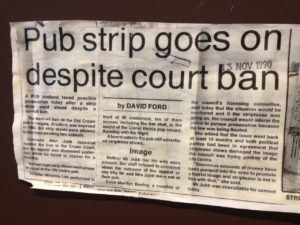 The residence includes the Old Crown, the storied pub next door, once home to lunchtime striptease shows, blue movie screenings and the subject of one of the UK’s first prosecutions under the Indecent Displays Act (1981).

Freeman and Barrett hired a crane to hoist a vast golden boar onto the pub roof, a remnant from the Bradford Festival and part of the city’s folklore. Their launch weekend in October 2017 featured light installations, artwork, projections, live music, dancing, DJs and an uncovering of the Bradford Beck river system.

The rooms have since hosted an eclectic range of events, notably a visit by the Leaders’ Quest social enterprise which brought civic representatives from places as diverse as Detroit and Bethlehem who wanted to find out what was happening in Bradford and see what they could learn from the city’s very distinctive form of urban renewal.

The message is spreading. In March, Freeman and Barrett will be appearing at the world-famous SXSW festival in Austin, Texas in a session entitled, Absurdity Sells: The Value of Playful Events.

The Brick Box launched in London in 2010. It worked on a number of regeneration projects across the capital, where the directors witnessed the displacing effects of rising real estate prices on those at the lower end of the social spectrum. 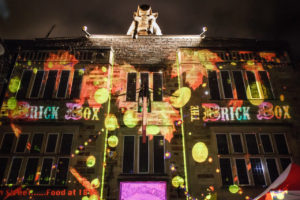 Bradford might be a bigger challenge, but the rewards will be shared more equitably, says Freeman. She adds: “We are not tools of gentrification. We want to help decrease inequality and give a voice to those who are marginalised.

“This is community-led property development. When property values go up, they will stay within the community, unlike what has happened in London. Artists and night-time economy people in places like Leeds and Manchester say it is becoming harder and harder to find affordable space because of development.

“People from London cannot believe what we have here. They are fascinated by what’s happening in Bradford.”