My first encounter with A Christmas Carol featured a load of Muppets, witnessed by my primary school self on the screen of the communal telly-on-wheels rolled out for the end-of-term film.

Twenty-odd years later, the prospect of seeing it performed on stage by humans aroused more excitement than Tiny Tim experiences when Scrooge gifts his family a fat Christmas turkey. Sorry for the spoiler, but everyone knows this tale’s outcome. What matters is how compellingly it’s told.

This version of the Dickens’ classic is imparted via Deborah McAndrew’s genre-mashing, thought-provoking and wholly entertaining adaptation, performed by the Leeds Playhouse Ensemble company.

Set in Victorian Leeds, it opens with a sickly Tiny Tim (Lipalo Mokete, gamely coughing his lungs up) whose condition is lamented by a motley crew of peasant apparitions who, via a dynamically-choreographed musical number, proceed to transform the set into Scrooge & Marley’s offices.

Robert Pickavance’s Scrooge is the archetypal horrible boss; more concerned with commerce than Christmas and none too pleased about affording his employee Bob Cratchit (a world-weary Darren Kuppan) the day off. ‘Humbug’ is his embittered response to almost everything – even a dinner invite from his handsome nephew Fred (Dan Parr) which I’d gladly snap up.

Returning home on Christmas Eve, Scrooge is visited by Jacob Marley, who, rather than sharing a sherry with his old business partner, turns up draped in chains and scares the bejaysus out of Scrooge, informing him that he’ll shortly be visited by three Christmas spirits: Past, Present and Future. 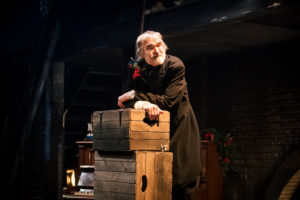 ‘Past’ (Tessa Parr) arrives in an illuminated dress and throws light on Scrooge’s history – a sorry cocktail of neglect, rejection and avarice. Watching the kindness bestowed upon him by his former boss, Joe Alessi’s delightful Fezziwig, Scrooge realises what a bitter man he’s become.

The distress Pickavance’s Scrooge demonstrates at his past misdemeanours plucks at the heartstrings, so when lights go up for the interval you might have to claim something’s in your eye. Speaking of lighting, it’s used pretty damn effectively throughout this production, rendering various scenes intimate, expansive and everything between.

The second half veers immediately into panto territory – the Ghost of Christmas Present gussied up in a Christmas tree outfit, cracking jokes and even eliciting audience cries of ‘he’s behind you’. With her expressive face and mischievous demeanour, Elexi Walker shines in the role (although Scrooge is rather less enamoured with her).

Through a crackingly well-executed series of rapid set changes, we (and Scrooge) witness the Crachits’ modest Christmas, and his nephew Fred’s fun-filled celebrations. Both groups scorn and ridicule Scrooge, and he really doesn’t like it. Nor does he like the notion that Tiny Tim is not long for this world unless something changes. 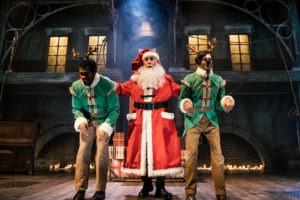 If you hadn’t yet twigged that things have got serious, mist starts swirling about the stage as a quite frankly terrifying, enshrouded Ghost of Christmas Present shuffles over to Scrooge who is holding his shit together about as well as I am. Together with an equally-eerie bunch of mates, the apparition shows Scrooge his own gravestone.

It’s the last straw. Scrooge is a changed man. As dawn breaks on Christmas Day he’s like Santa reincarnated as a skinny businessman – buying the Cratchits lunch, merrymaking with his nephew, and (to show the New Scrooge is here for life not just for Christmas) giving Bob a pay rise.

Leeds Playhouse’s A Christmas Carol hops genre as nimbly as its standout cast navigates the set, running the full gamut of human emotion. Fun, and a whole host of other stuff, for all the family.

Brute Strength: Why Our Northern Concrete is Worth Keeping by Damon Fairclough @noiseheatpower northernsoul.me.uk/brute-stre… #brutalism pic.twitter.com/8hydoqmZrA

One of our favourite delis. twitter.com/GrazeRamsbotto…

It's another grey day so today we're going to think about one of the last times we went on holiday - to The Inn at Whitewell in the Forest of Bowland. Happy days. pic.twitter.com/42nL0bywZY