Theatre Review: On Behalf of the People, Burgess Foundation, Manchester

In my mind, there are two types of plays: the ones where you keep checking your watch and the ones where you leave the theatre and it’s suddenly dark. On Behalf of the People, written by Ray Castleton and produced by Yorkshire-based theatre company The Melting Shop, falls into the latter category. In fact, it’s one of the best plays I’ve seen this year.

Unfolding against the backdrop of the aftermath of war, we’re taken over the threshold of a new decade where we see enormous political and social change; from the election of a post-war Labour government and the birth of a new health service to coal becoming nationalised.

These are all central themes to the play but what really shines through are how these themes are conveyed through personal relationships. 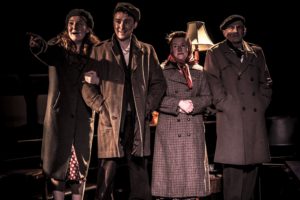 We see Tom desperately seek approval from his father, a staunch union man who resents Tom for failing to stop his brother joining up and subsequently dying in combat. Meanwhile, Liz, who has waited for Tom’s return for five years, struggles to shoulder the burden of being the family breadwinner.

There are some wonderfully fragile moments where we see the impact of war in sharp relief. “I miss him,” says George. It would be easy for lines like this to feel clichéd but Castleton perfectly navigates the big emotions while weaving in aspects of everyday family life that are as real as they are relatable.

An unfortunate clash with the England World Cup match meant that audience numbers were smaller than usual during its current run as part of the Greater Manchester Fringe Festival. But this only served to create a level of intimacy between audience and actor that you so rarely get the chance to experience.

A nod, also, to the International Anthony Burgess Foundation which, beyond being my local polling station, is a fantastic arts venue and one of Manchester’s best hidden gems (the current exhibition, Banned Books – Anthony Burgess and Censorship, has some fascinating pieces, while the café always has homemade cakes and tempting treats on offer).

Beg, borrow, steal a ticket. This might just be the best two hours of theatre you see all summer.

Originally commissioned by the National Coal Mining Museum as part of its programme of activities marking 70 years since the nationalisation of the UK coal mining industry, On Behalf of the People premiered last year at The National Coal Mining Museum and is now rounding off a major UK tour until July 20, 2018. For tickets and information, click here.