I have a confession. Before last night’s performance of Queens of the Coal Age at Manchester’s Royal Exchange, I didn’t know much about Women Against Pit Closures. Born in the mid-80s and living in rural Warwickshire, I had little knowledge of the legacy of the miners’ strikes until I was older and developed my own interest in history and politics.

But, even then, female narratives (except the wonderful Mrs Wilkinson in Billy Elliot) were largely absent. With Sting’s The Last Ship also currently touring, tales of the industrial North are a hot topic but Queens of the Coal Age – written by Maxine Peake and directed by Bryony Shanahan – boasts something different. Based on a true story, this account centres around four women: Anne (Kate Anthony), the wife of NUM leader ‘King’ Arthur, Lesley (Danielle Henry), Dot (Jane Hazlegrove) and Elaine (Eve Robertson) who all, in 1993, occupied a Merseyside pit threatened with closure.

“What do we do now?” asks one of the woman after they’ve usurped the manager’s office.

“We tidy up,” replies Anne and the audience bursts into collective laughter. 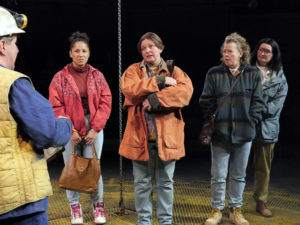 As you might expect from Peake, the dialogue is side-splittingly funny. I spend most of the evening in fits of giggles as the hilarious, ferocious women attempt to keep busy – and sane – down the pit over the course of a few days.

The costumes are decidedly 90s (I recognise the tie-dye, jackets and trainers from my younger wardrobe) which feels a bit weird because it’s such recent history. I feel like I’m watching a film rather than a play. Or that I’ve gone back in time and I’m watching my mum muck about with her mates in the kitchen. There are dirty jokes galore and the narrative is replete with toilet humour. There’s even an imaginary dog. In dark times, people will always opt for humour – “if we didn’t laugh, we’d probably cry” notes Dot.

The comedy should not take away from the play’s pathos. There are some truly poignant moments including the affable, mixed-heritage Michael (Conor Glean) pausing Anne mid-sentence to point out that “it’s black” when she refers to black people as “coloured”, and Anne’s explosive rant about her daughter’s treatment because of her parents’ political protests. There are conversations about privilege and what that means including a dig at the university-educated who line the pickets only to disappear home to a nice glass of red when it all kicks off. Meanwhile, 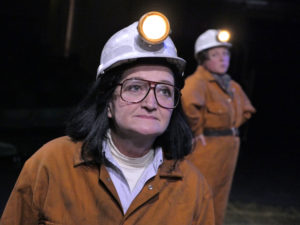 Peake does an excellent job of exploring notions of the working-class woman “coming out of the kitchen” realising that they are, and can be, so much more.

Some of the male characters like the odious Ramsey (with his jazz mags and blatant sexism) are vile and view the women as nothing but a nuisance and an embarrassment to their husbands, but it’s also worth noting that not all the fellas receive a tough time – notes of support are smuggled down in bundles, meat pies and sandwiches are delivered by “our lass” and the women are admired, celebrated.

Despite it being another blisteringly hot day (well, for Manchester, anyway), the theatre is chilly. I don’t know if this is on purpose but it adds to the feeling of being underground. When the women are cold and, shivering, wrap a makeshift sack blanket around their shoulders, I shudder. The round is well utilised with only a table, chairs, some newspapers and a couple of sacks strewn across a coal-grey floor. The inclusion of a mechanical pit-lift is clever and adds to the sense of going underground – and is put to excellent use during an emotional and rousing ending.

It’s hard to pick a stand-out performance. The four women are equally superb, bouncing off each other, giving one another room to speak and move – like genuine friends might. Nothing much happens – there’s no great danger, no tangible monster lurking around the corner – but the tension is created in the words, and the silences. 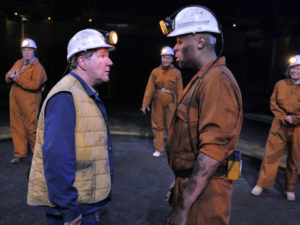 The accompanying theatre programme includes a transcript of an interview between Peake and the Women Against Pit Closures where Elaine Evans recalls a conversation with a policeman who’d told her she’d lost. “I said, ‘Yeah, but we went down fighting. And that matters. That matters.’”

Each woman questions the importance of their protest to which Anne always reassures them that, of course, by the simple act of being there, of having gone through with the plan, they are doing something worthwhile.