Ask someone this: what is the first thing that enters their mind when someone mentions women in the Victorian era? What’s the first thing they say? High-tea and respectable society or more domestic pursuits? Adventures in Egypt – Mrs Goodison & Other Travellers at The Atkinson is a rare display of an intact collection of ancient Egyptian antiquities which focuses on its connection to a 19th century female Egyptologist and her contemporaries in the North West of England. What’s more, it aims to challenge long-established stereotypes.

For the first time in 40 years, the public has access to the private collection of Mrs Anne Goodison, one of the lesser-known antiquaries of the 19th Century. Curated by Egyptologist Tom Hardwick, the exhibition combines Egyptian artifacts from Goodison’s collection along with notable pieces from various other private and public stores. Seeking to put the Victorian female scholars of Egypt firmly on the museum map, Southport has put on a spectacle that honours the brains generally excluded from mainstream narratives.

With helpful labels, The Atkinson highlights that 19th century habit of Europeans and Americans who travelled to Egypt for its history, biblical connections and exotic environment. It was that century that Anne Padley was born into, in 1844 in West Derby. Later, she married local engineer George Goodison of the eponymous Goodison Park in Liverpool. Interested in ancient Egypt and travelling, she set sail with her husband to Egypt in 1886 with a view to indulge in her interest. Such was the beginnings of many journeys that would lead to a collection of more than 1,000 artefacts, acquired with the help of the Reverend Greville John Chester, a noted donor of antiquities to the British Museum. Goodison’s fascination with ancient Egypt was such that she was able to learn hieroglyphs within a decade. 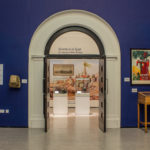 Hardwick explains the significance of the collection: “There are very few [artifacts] that have survived to this day largely untouched. The Goodison collection is particularly interesting because it is a rare survival from 19th century that hasn’t been broken up.”

He continues: “Either they get given to a museum or art gallery and they attract more donations, so they lose their character, or they get sold off and dispersed to other collections or museums.”

Assorted items are on display here from notable sites such as Tell-El Amarna and the Temple of Amun, and they have been placed next to Goodison’s collection to help contextualise the objects. But one aspect the public often associates with such exhibitions is missing: mummies. Hardwick says: “It would be nice to not have a wrapped or unwrapped mummy dominating the show but we haven’t had any complaints about that.” 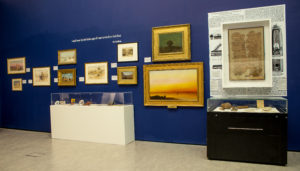 While a presentation of Egyptian antiquities and more recent items, the display is an exhibition about women in the North West who had a scholarly interest in ancient Egypt and, more specifically, were acquiring a personal collection of ancient artefacts. Its primary narrative is about shedding light on women who, by accident of being born in the Victorian era, had few permissible social and private pursuits granted to them by contemporary society. A barrier to the lives of many women throughout the past, Hardwick highlights this about Goodison.

“We know more about her now than a few years ago when the exhibition was in its planning stage, but there are still lots of gaps in her life and we don’t know what she looked like. Part of the exhibition looks at people we know she knew and uses that to put her in the context of people we do know a lot about.”

One acquaintance who features prominently is Annie Barlow who helped to found the Bolton Egyptology collection which, today, is of significant national renown. Another is Jesse Haworth who was instrumental in putting together Manchester Museum’s Egyptology collection. Amelia Edwards, novelist and friend to Goodison is also mentioned, not just for her friendship but for her role within the Egypt Exploration Fund (later re-named the Egypt Exploration Society) which is now Britain’s leading Egyptology society. These connections are deftly shown on section labels throughout, particularly near items that illustrate another significant link between the North West and Egypt: that of the cotton industry. Egyptian cotton fed the mills of Lancashire and was of such importance that King Fuad of Egypt, monarch in the early 20th Century, visited Bolton where he inspected the mills and was gifted with a beautiful bolt of fabric, on display, which combines an Arabic greeting with ancient Egyptian designs. 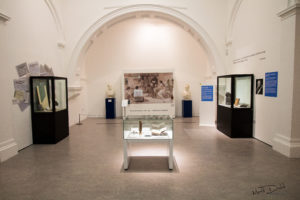 The response of Egyptians to the increasing British influence in their country, as well as British officials’ habit of acquiring antiquities in Egypt in the 19th century, is something Hardwick was keen to examine.

“A lot of museum displays don’t address the question of how people travelled to Egypt and collected Egyptian items. Ancient Egypt was almost the least important part of 19th century engagement with Egypt as there were colonial and financial reasons for many Brits and other travellers to be there. There was a vocal Egyptian protest against the British presence and taking of Pharaonic material”.

Hardwick has addressed this in parts of the exhibition by displaying portraits of Lord Kitchener and Lord Curzon which are on loan from the National Portrait Gallery. Both peers were prominent British statesmen who helped to administer British influence over Egypt at the turn of the 20th century. Nearby are illustrations depicting the response of the Egyptians; one is a cartoon from a nationalist newspaper of the period depicting British officials escaping Egypt with their ill-gotten gains.

This exhibition was influenced, in part, due to Hardwick’s time in Egypt as he has worked and lived there for the past seven years. “In my work, it has made me think a lot more about why a significant amount of Egyptian objects have made their way to the West and the people and mechanisms involved. I wanted people to think about why these wonderful collections are in the North West.”

This experience led to Hardwick forming relationships with contemporary collectors, particularly people with vintage travel paraphernalia amassed from the last two centuries of the golden age of travelling. This was when Westerners visited far-flung areas of the world and stayed in hotels that melded local architectural styles with colonial architecture; a sort of travelling culture that would have been not too dissimilar to the itinerant activities of Anne and George Goodison. 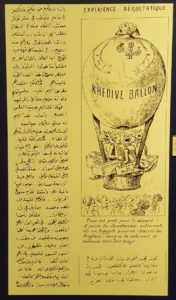 One such contributor to the exhibition is Andrew Humphreys, who first travelled to Egypt in 1988. He says: “I lived in Cairo in the 80s and 90s, and I started picking things up back then that I found in antique shops and bazaars in Cairo and Alexandria. I had been picking things up along the way for the past 25 years.”

Humphreys has contributed guidebooks and brochures to the exhibition, which aptly display the aesthetic of travel paraphernalia of the period but, more interestingly, show Western fascination with a land that combined a biblical and exotic appeal:

“I became interested in other foreigners who had lived there before me and the evidence is there in the old hotels and villas. I just became very curious about who these people were who were there 100 years before me. So I started to read their accounts and diaries as well as picking up old hotel posters and menus from 19th century Egypt.”

In this exhibition, Anne Goodison’s lifetime passion for Egyptian culture has been brought back from obscurity by explorers and academics of our own century. Now we can look at it and appreciate the objects but also contemplate their ethical and political significance in the world of the male-dominated heritage industry.

Adventures in Egypt is on at The Atkinson in Southport until March 11, 2018. For more information, click here.