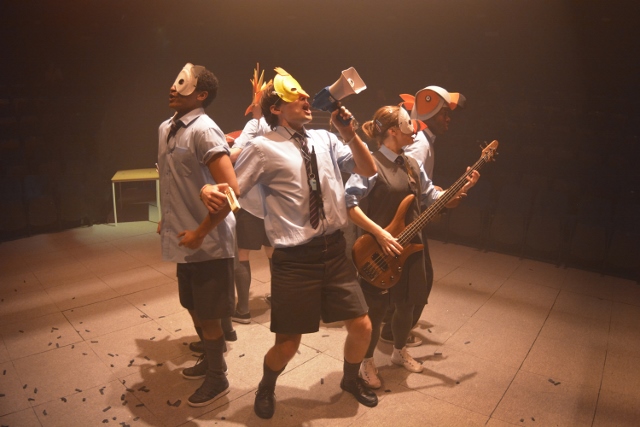 And with a gentle hand

Lay it where Childhood’s dreams are twined

Pluck’d in a far off land.’

This poetic prologue gives the reader an instant ‘How to…’ guide with which to read Alice’s Adventures in Wonderland. It is a fantastical adventure with no real reasoning, no real quest nor any real drive from a protagonist. It is, instead, an exploration of fantasy and imagination that is pure indulgent joy.

Charles Lutwidge Dodgson became Lewis Carroll when he wrote Alice. The academic wanted some literary anonymity from his prominence in society. He found his pen name by translating his name into the Latin, ‘Carolus Ludovicus’, then back into English – Lewis Carroll, which is evidence that the man liked to play with ideas and language.

Alice’s Adventures in Wonderland, first published in 1865, has been translated into many languages and re-imagined in film, dance, song and art. Its cleverness is that it is bottomless – unlike the rabbit-hole which Alice falls through at the beginning of the tale.

How, then, does one go about translating this into a Christmas production for a family audience at the Bolton Octagon? 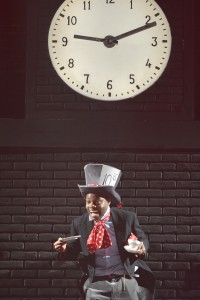 Director Elizabeth Newman and writer Morgan Lloyd Malcolm decided that one of the main themes within the book is identity. After all, they say, once in Wonderland the Caterpillar asks Alice, ‘Who are you?’

So, the Octagon’s Christmas feast begins in a rather drab, grey classroom filled with Year Six pupils and the ignored, clumsy and different Alice who is unable to find her own identity. She is shy, quiet and not allowed to take the school rabbit home at weekends because ‘she may drop her’. Suddenly and without explanation, the class rabbit is human-sized, runs around and falls through the hole (in this production, it’s a hula-hoop suspended from the ceiling). Alice follows, trying to prove she is worthy of taking care of business. For me this seems more bonkers than the original.

The novel begins on a lazy, summer’s day outdoors with Alice dreamily uninterested in her sister’s book which has no pictures. A story without pictures? What’s the point? In the book, Alice is feisty, forthright and full of alacrity. Her character is of the Peter Pan ilk and other enduring protagonists in children’s books. Not a nice child but not a nasty one either, just a child who has opinions and ideas and finds her or himself having to make decisions according to their own reality – that of a child. Surely that is the draw of such characters to both children and adults alike?

So to be presented with an Alice who is a little more than pathetic is so far from the original it beggars belief. This Alice, I thought to myself as she was hanging from the hula hoop, will never last in Wonderland.

But anyway, we’re here now, in Wonderland. A magical Christmas show should at least have an Alice who will eventually get a grip; the drabness that belongs in big sister’s book will be consigned to the past, and Alice will be allowed to dream the dream of a child’s imaginings with no holds barred.

But the school-themed design of the show continues. All of Alice’s school friends re-appear playing the weird and wacky characters. They keep their uniforms on throughout and wear crude handmade masks when they take up the roles of the various animals, playing cards and flowers which dominate the original story.

And I get it, I do. I understand Michael Vale’s design. If we are in a school, then the whole piece should reflect this idea of objects and materials found and made within a school environment. It’s a bold idea and the cheap carpet and fluorescent lighting remain within the piece and are moulded and played with. There are some clever design choices but, man, it’s just so drab! 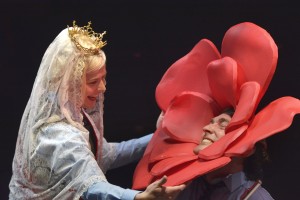 The problem with this adaptation and with the production is that Alice is constrained by her own reality and she shouldn’t be – that’s the point! There’s a total disregard to the nub of the original story. Watch a child pick up a hula hoop and pretend it’s a rabbit hole or a butterfly’s wings or whatever – that child imagines it is something other than the thing which it is.

Has anyone seen the film, Miss Potter? For all its failings as a film (notwithstanding the questionable details of Beatrix Potter’s life), it explores the absolute truth of someone’s imagination – however far fetched. Even as an adult Miss Potter sees her drawings of Peter Rabbit and Jemima Puddle-Duck come to life. As a viewer, that is the magical happening. We see what she sees.

The Alice in Carroll’s original story sees the White Rabbit, sees the Caterpillar, sees the Queen of Hearts, and all of the events as they unfold. She sees them in glorious, weird and wonderful Technicolor and so we see it too. And it is curious only because Alice is curious. That is the book’s long-standing magic and draw which has lasted more than 150 years. It is so vivid a piece of storytelling that it has given rise to hundreds of illustrations, songs and dances – all these things from words on a page.

The Alice in this production sees what we see in all its drab, shamefully monochrome, everyday life. It’s a very real, very modern place which is unforgiving and a tad worthy. Both the director and writer feel the need to rewrite a nonsense into some sense by giving Alice a quest so she may feel her worth. It all feels like a very modern message, placating to the theatre board who have to make sure that their engagement department is well fed.

But there are things to commend about the production. The multi-disciplined actors do a very, very fine job. They bounce from character to character with ease. They play instruments, sing and dance – it’s enough to make the Cheshire Cat’s head spin. The musical director Barbara Hockaday (who also plays many roles including the White Rabbit) has done an almost impossible feat, ignoring past compositions and totally re-awakening the musicality of Carroll’s nonsense. Unfortunately, this comes amid the general noise and flimsy chaos of scene changes so that the songs are difficult to appreciate over the din. 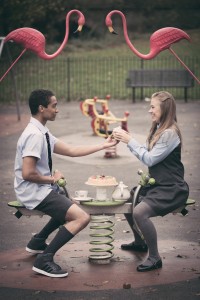 The two children accompanying me said they liked it a lot. And who am I to argue? Who am I? They had never read the story nor seen any film version. They concluded that it was confusing because it was too noisy. And ‘why were all the kids now being weird’ when they were sensible before and ‘why was the Queen so bothered about everything being red when she was wearing a big white veil’?

And I suppose, for me, that is the point, the crux of the story. A normal girl goes to WONDERLAND and comes back. What a brilliant dream that is. But neither the kids nor I went anywhere much outside the very confines the production tried to question.

Why has this classic story lasted and been adapted, reinvented and revered for so long if it isn’t about anything? How can that be? Let’s all imagine that Carroll is alive today and has just written Alice. Would it be shelved because it didn’t tick the necessary boxes to make it ‘about’ something? Does it make us all a bit twitchy to just let things be what they are without meaning? Are we so scared of going on an extraordinary journey for no reason at all?

Surely the answer lies in the fundamental poem-prologue that Carroll wrote all those years ago. It’s a childish musing; a story that belongs where we all begin – imagining, enjoying the world without having to seek a meaning. After all, it’s fun sometimes, isn’t it, to spend time just daydreaming? When did you last play, just for the sake of it?

And it’s Christmas, by the way.

Rating by an adult:

What: Alice in Wonderland 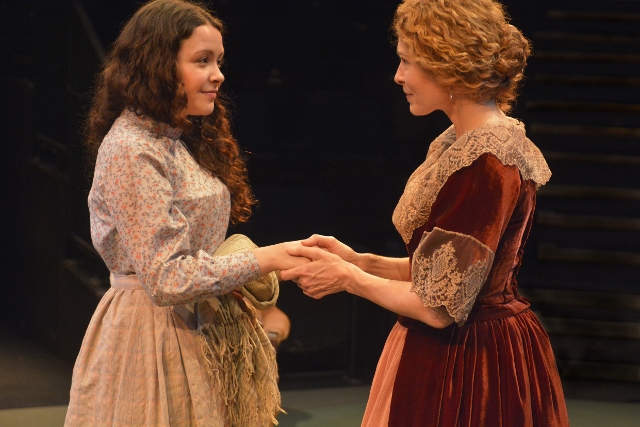 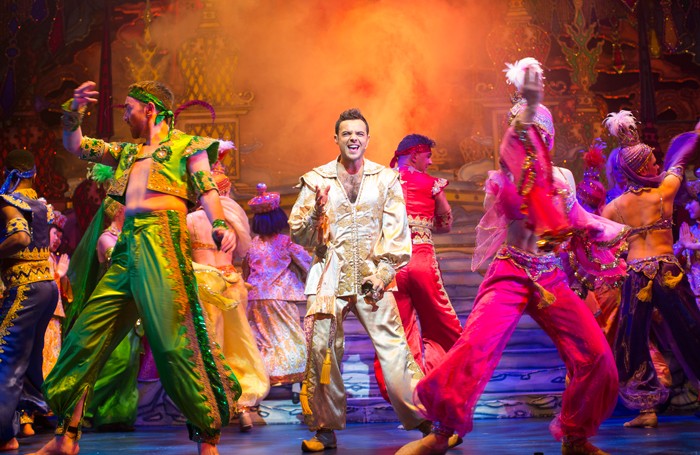 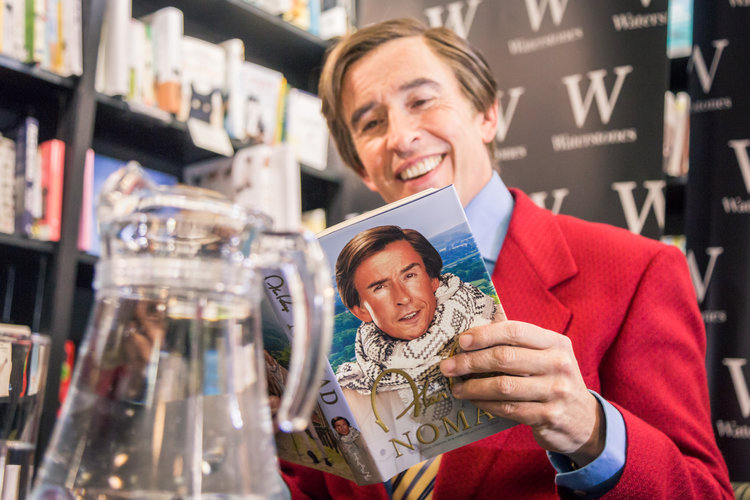 Architecture for Life: A New Home for RIBA North