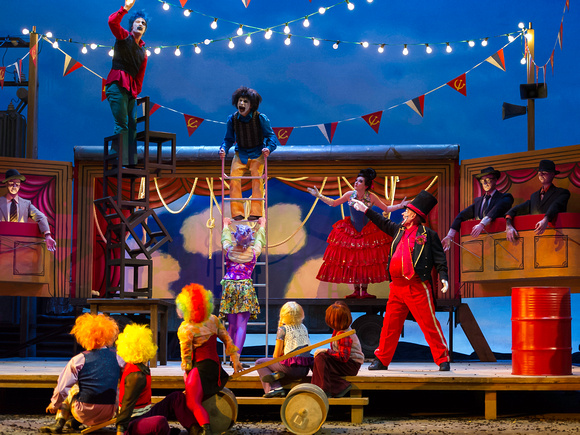 It’s a busy old time in the Hamilton household at the moment what with the build-up to the imminent birthday celebrations of your esteemed Opera Correspondent. The preparations for the state banquet, the VIP guest list and buying the frame for her Majesty’s telegram have all eaten away at time itself. In between the to-ing and fro-ing I did manage a visit to The Lowry for two of Opera North’s Autumn season, The Bartered Bride and La traviata.

Roughly speaking, Bedrich Smetana and Giuseppe Verdi were contemporaries of the mid-nineteenth century Romantic period when it seemed nought else but love was in the air. Well, that and tuberculosis, malnutrition, syphilis, rickets and premature death. But it was l’amour that was all the rage and it certainly rages around these two productions. Both concern the trails and tribulations of star-crossed lovers to find everlasting happiness with varying degrees of success. 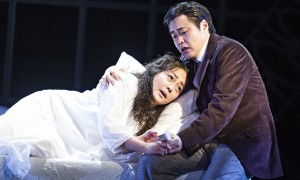 The Bartered Bride is a comic affair concerning the fortunes of two Bohemian villagers, Marenka (Kate Valentine) and her boyfriend, Jenik (Brenden Gunnell). Jenik is a mysterious stranger working as a farmhand, and Marenka is the daughter of local but impoverished farmer, Krusina (Peter Savidge). In a deal negotiated by Mayor Kecal (James Creswell), Krusina’s debts will be settled by rich Micha if  Marenka consents to marry Micha’s son, Vasek (Nicholas Watts). She has been bartered. Micha’s son is a stuttering naïve who Marenka has no intention of marrying.

The setting of The Bartered Bride has been updated to communist Czechoslovakia on a festival day with children in red pioneer scarves playful in the sun as the village choir rehearse a folk song before the kegs of pilsner are opened. It is a joyful opening to what turns into a complicated and, at times, convoluted plot with much vocal explanation of what the hell is going on. At the interval I needed a glass of wine to clear my head of all the possible plot permutations that would have Betfred in a spin. 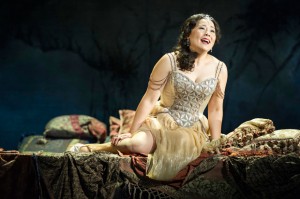 Act Three was enlivened by the appearance of a circus on stage, ring-mastered by the witty Jiri (Campbell Russell) with the ‘joviality of Stalin’. A nice satirical touch and the acrobats provided a welcome diversion from the tangled web of romance and intrigue of the libretto. The singers coped manfully under the weight of the plot, especially Marenka and the marvellous duplicity of Kecal who would have made Dick Dastardly proud. It turns out that Jenik is Micha’s long lost son, marries Marenka, everyone lives happily ever after under the jackboot of Stalin’s henchmen until the Hoff saves them from communism. The end.

La traviata is a much simpler affair; boy meets girl, girl dies of tuberculosis. Well, it’s a bit more complicated than that but it is a powerful tale of forbidden love, duty and illness told in a trialogue between the courtesan Violetta (Hye-Youn Lee), her love,  Alfredo (Ji-Min Park) and his disapproving father, Giorgio Germont (Roland Wood).

The opera is held together by a towering central performance by Hye-Youn Lee as the doomed Violetta. Her voice was wondrous. The TB she succumbs to gives her an orgasmic death, raising her arms in exquisite ecstasy before falling to a lifeless, lonely end. The couple in front of me cried her a river and I, too, shed a tear for this wonderful display of dissolute love. A silent chorus of masked spirits watched over her passing, slowly applauding her magnificent demise. It was beautifully staged and designed by Madelaine Boyd, and supported by a great cast and orchestra led by Gianluca Marciano.

All in all, it was a wonderful week for opera and I can’t wait for Opera North’s Winter season in 2015. I’m off now to see if my birthday suit still fits.