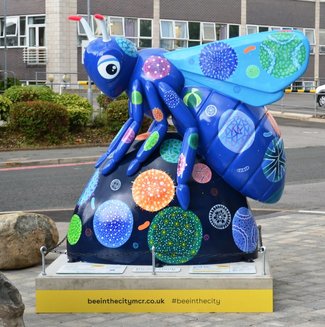 If you’ve been out and about in Manchester this summer, you’ll probably have noticed some new arrivals in the city. That’s right…the Manchester bees have landed.

Of course, the bee has long been emblematic in Manchester, having been adopted during the industrial revolution as a symbol of the world’s first industrial city, a city that was a veritable hive of activity. Now Wild in Art, Manchester City Council and the bees of Manchester have brought the city together for Bee in the City, one of the largest and most popular public art events in Manchester’s history.

Each bee, and there are more than 100 of them around the city (more than 200 if you count the little bees created by schools and local groups), has been designed by a different artist and celebrates the unique buzz of Manchester, from its industrial heritage and its vibrant music scene through to the modern high-tech industries that characterise the city’s future. And that is where Sneezebee enters our story.

Sneezebee is the latest recruit into one of Manchester’s fastest growing sectors: medical research. Sneezebee explains: “When they first told us at the hive that we had the chance to take part in Bee in the City I was delighted…buzz…and I signed up straight away. Later, when they started talking about assignments and they mentioned the Medicines Evaluation Unit at Wythenshawe Hospital my antennae shot up…buzz buzz…I just knew that was the one for me and I volunteered immediately.” 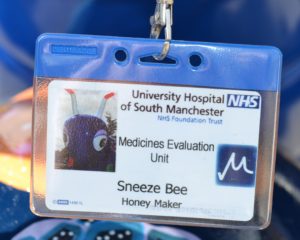 The Medicines Evaluation Unit (MEU) is one of the UK’s leading specialist clinical research facilities with more than 20 years’ experience in undertaking clinical trials to aid the development of ground-breaking medicines. MEU has also donated more than £6 million to Manchester charities and built a bronchoscopy unit at Wythenshawe Hospital which is saving lives through the early detection of lung cancer.

“I’m very proud of our city, all us bees are…buzz…and ever since I was a little bee in the nursey back at the hive I’ve wanted to find some way to help my fellow Mancunians. We bees are very civic minded you know…buzz…and this explains my colouring.”

From a distance Sneezebee appears to be brightly decorated with colourful spots but take a closer look and you’ll see they are actually enlarged pollen grains. Bees collect pollen and bring it back to their hive where it serves as the primary food source; by doing this bees play a vital part in the process of pollination.

“Now I’m able to help people understand a little bit more about pollen and teach them more about all the good work we bees do… buzz buzz! But I have to admit all that pollen does…sometimes…make me…ACHOO! MEU has a lot of experience in allergy and respiratory research…buzz…and I’m keen to do my bit to help.” 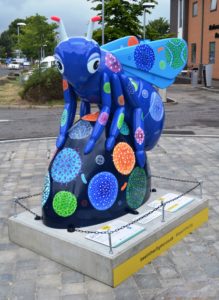 I ask Sneezebee what it’s been like starting a new job.

“It’s been SO exciting becoming the chief honey maker here at MEU. And everyone at Wythenshawe hospital has been so welcoming. People keep coming up wanting to take selfies with me…buzz buzz buzz…I feel like I’m famous.”

Knowing that she’s a busy bee with many responsibilities I suggest that a quick-fire round of questions is a great way for Northern Soul readers to learn more about her, and with a buzz of her wings we’re off.

I love all my sisters equally…buzz…but I am especially close to Bee-yond…buzz…my fellow hospital Bee at North Manchester General Hospital…buzz…Love you Bee-yond!

Hanky every time. After all, we bees are very environmentally minded you know. 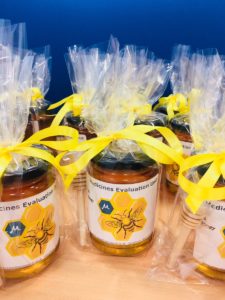 A Taste of Honey…buzz…I am a Greater Manchester girl after all.

Black and yellow stripes? Or yellow and black?

Just Like Honey by The Jesus and Mary Chain.

The Bees by Laline Paull.

Any advice to any young bees among our readers?

Bee careful of something you humans call ‘windows’…buzz…they’re like invisible force fields to us. 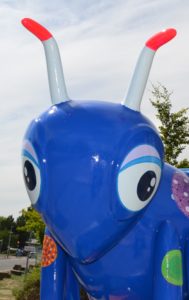 Your ambition in life?

To bee the best bee I can bee, and maybe one day bee the queen of my own hive…buzz buzz buzz!

What is the top secret location of the Manchester bees’ hive?

I’ll never tell, not for all the honey in the world.

With the interview drawing to a close, I wonder what’s next for Manchester’s newest science Bee.

“I’m a very busy bee and I love my work here so much that MEU is going to be my permanent home. And what more could a young bee ask for?”

What more indeed. Sneezebee, we salute you.

You can find Sneezebee at The Medicines Evaluation Unit on Southmoor Road in the grounds of Wythenshawe Hospital.

Manchester residents and visitors will be able to explore the Bee in the City Trail using a Bee in the City app which will help them navigate around the city, discover new places and follow a map of the bees, receiving ‘rewards’ and prizes as they go.

MEU are offering locally-produced pots of honey to the first 100 visitors to unlock their ‘reward’ and free colouring-in pollen sheets are available to be downloaded & printed off on their website – collect your free colouring pencils at their reception to start decorating your own pollen grains.