“I hate Peer Gynt. Why should we do it?”

These aren’t my words. It’s the phrase that apparently sprang to the lips of Gemma Bodinetz, artistic director of Liverpool’s Everyman Theatre, when it was suggested the venue might want to produce a new version of Henrik Ibsen’s classic play.

But although they’re not my words, I have some sympathy. Peer Gynt, first performed in 1876, is notoriously tricky. It flits through time and space and in and out of consciousness as it follows the title character through a life of rebelliousness and anarchy. Loosely based on a Norwegian folk tale, its blend of surrealism and satire can feel pretty far removed from modern British life – although just like on Twitter, trolls feature heavily.

For Robert Farquhar, however, Peer Gynt is a theatrical enigma that has long toyed with his imagination. He’s a Liverpool-based playwright with a reputation for robust, rampaging comedy, and it was he who suggested the Everyman should consider adapting it for today’s audience. He was evidently persuasive, as his new Peer Gynt-inspired play, The Big I Am, opens at the Everyman on June 16.

“What I’ve set out to do is write a very accessible version of Peer Gynt,” explains Farquhar. Rather than traversing Ibsen’s original world of Scandinavian villages, troll kingdoms and North African landscapes, The Big I Am opens in mid-20th century England then heads off on a new journey. 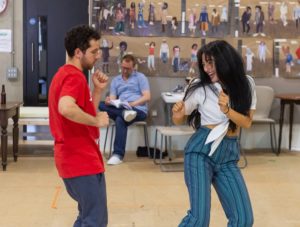 “I think it’s accepted that it’s quite a difficult read in its original form,” admits Farquhar. “But Peer Gynt is a fantastic character, and I made this connection between him and a young, pre-fame John Lennon. There’s something in his loudmouthness, his rebelliousness, his romanticism, his occasional violence.

“I had the idea of seeing him being born during the Blitz, and when I looked at the play’s episodic nature, I thought the big wedding scene at the beginning would fit nicely with an early 1960s northern English feel. Then when he goes to the countryside and builds a cottage, it feels a bit like 1970s hippy idealism. And when he becomes a corrupt businessman, that fits in with the 1980s ‘no such thing as society’ thing.

“I thought there were a lot of set pieces that would exploit the humour and anarchy of my writing, but I’d be able to get the heartbreak in at the same time. So that’s the idea I took to the Everyman about two and a half years ago.”

Since Farquhar’s initial pitch, the Everyman has been on a winding theatrical journey of its own. In 2017 it relaunched its own in-house repertory company and is now reaching the climax of its second company season. The Big I Am is the final show to be added to its hectic schedule, and with roles for the entire team, it aims to round things off with what its director Nick Bagnall calls “a massive, open-hearted romp”. 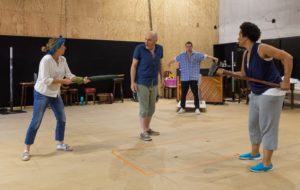 Farquhar says: “The rep company was being planned when I pitched the show, and that was lucky for me. It means we have 14 actors, so the scale of the piece is do-able. The whole company is constantly busy in the show, and the actors absolutely love it.”

So, if The Big I Am is essentially a new Everyman play, how faithful has Farquhar been to the original?

“I’ve been faithful to the structure, but I’ve thrown a lot out, added new bits and mixed up loads of stuff.”

And how does he think audiences will react? Will they be laughing or crying?”

“All that, yeah. I want it to be a very entertaining night out. It’s comic, it’s full of music, and it’s full of heartbreak. But it pays attention to the deeper themes of Peer Gynt as well – the search for identity, the search for meaning. We close the first half with Identity by X-Ray Spex, which seems to me to be perfect. ‘Look in the mirror, do you see yourself? Do you see yourself on the TV screen?’” 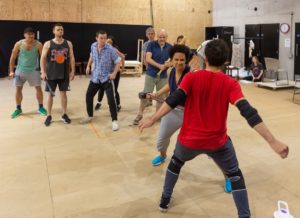 Farquhar describes himself as being “obsessed” by music, and he is choosy about the tunes used to underscore key moments in his script. “We use a song by Helen Shapiro and a version of Praise You, and X-Ray Spex and the Incredible String Band.”

The show’s composer is regular Everyman collaborator, James Fortune, and Farquhar is clearly impressed by what he brings to the production process. “When the Sylvie character first arrives – she’s called Solveig in the original – she sings a version of this Helen Shapiro song. I said to James I wanted it to sound like Billy Fury, and he just went away and did it. He’s given it a lovely David Lynch, Joe Meek echo-y quality. And we’ve got a scene with a load of geezers in a pub, all singing filthy lyrics for their cockney knees-up. It becomes like a mad scene from Oliver, just cockney gobbledegook. It’s brilliant.” 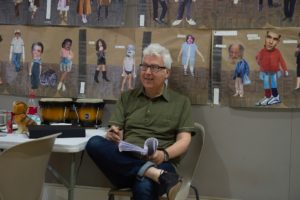 Farquhar’s last big work for the Everyman was Dead Heavy Fantastic in 2011, a play that also doggedly pursued a single individual as he pinballed from one incident to another – though in that case it was through one messy Liverpool night out rather than the 70-odd years of Peer Gynt’s life.

The writer is clear about the common theme that connects not just these two works, but most of his plays.

“My constant theme is ‘what do we do in a world where God doesn’t exist?’” he says. “I’m essentially a comic playwright but it’s something I constantly return to. In plays like God’s Official, or Di is Dead or Dead Heavy Fantastic, there’s always this question: how do we replace God? How do we find meaning in life?”

Ah, the meaning of life. Given that Farquhar has namechecked both Ingmar Bergman and Monty Python as reference points for The Big I Am, the phrase seems particularly apt. It sounds like a show with an accessible, down-to-earth spirit, but one that isn’t afraid to tackle the biggest questions of all – an approach that sits firmly within the Everyman’s own theatre-making tradition. 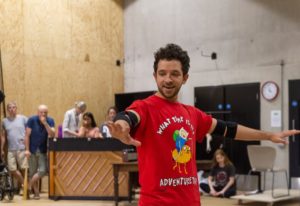 “When I sent it to Gemma Bodinetz,” says Farquhar, “I said ‘I want to write another play for the Everyman please, and this is what I’m thinking about. I don’t want to do anything that’s ordinary. I’ve taken the most unordinary play in existence, Peer Gynt, and I want to have a go at that. I want to make it an Everyman play, because I think I pretty much know what that is.’”

With its big ideas, big jokes and big songs, it will be fascinating to find out whether The Big I Am succeeds in turning this life less ordinary into the stuff that Everyman memories are made of. Because mentioning no names, some people hate Peer Gynt. And it may turn out that this show is a great deal easier to love.

(Main image: The Big I Am in rehearsal, photo by Brian Roberts )