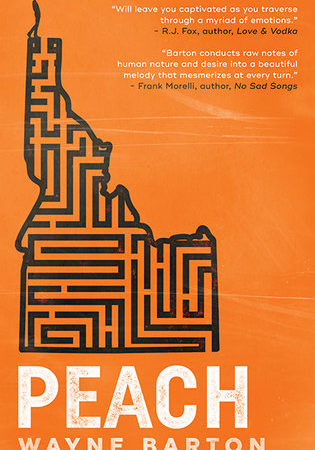 Typically, Fanny Price is the least well-loved of Austen’s heroines. Passive and inward-looking, her felicity is secured more by patience than action. Freddie Ward, the protagonist of Manchester-born Wayne Barton’s first novel Peach shares something of her qualities.

It’s a testament, then, to the quality of Barton’s writing, that – for all his protagonist’s self-absorbed inertia – the reader comes to have a stake in his own happy ending.

A behind-the-curtains songwriter, a little in the Guy Chambers mode, Freddie finds himself in Bliss, Idaho, the guest of Hal Granger, an elder statesman of Americana, looking (ostensibly) for a collaborator.

The novel is at its richest in Hal’s presence; vividly drawn, he is a presence where Freddie can threaten to be an absence. Barton has a fine ear for dialogue, capturing the cadences of a particular American vernacular, and it is Granger’s voice that resonates truest – warm and a little weary, like a country and western song.

While Freddie introspects, it is the rest of the cast who – literally – support him, sparking the ignition of the plot’s engine. Although at first glance types – and uniformly beautiful – the females who form triangles around him coalesce into characters more substantial than mere soubrettes. A bout of competitive dressing between first love Kaia and Bliss-born Brooke is a perfect miniature of comic discomfort. 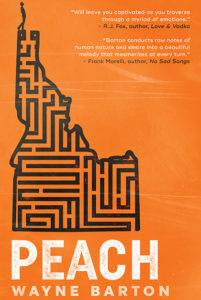 Much of the prose, it must be owned, is languorous and lovely, easing the narrative gently onwards with the unhurried certainty of creek water in summer. As such, there is a certain meandering of genre. Peach begins to flow like a road trip odyssey before turning back on itself as a romantic comedy, albeit one which sees its hero coming of age through grief.

Like real life, some tributaries remain unexplored. Both Brooke’s quirk – a dictionary of words without English synonyms – and Hal’s bittersweet legacy – 40 letters from his deceased paramour – have potential that feel under-utilised.

All things considered, the strengths of Peach lie in its subtexts, the guts of its gentleness and kindness. It’s a novel that’s unashamed of writing letters in the 21st century, and it is such quiet cussedness, rather than its hero, that gives it its character.

A Bartonian equivalent of Emma Woodhouse would be something to read indeed.

Peach is published by Fish Out of Water Books and available to buy now.