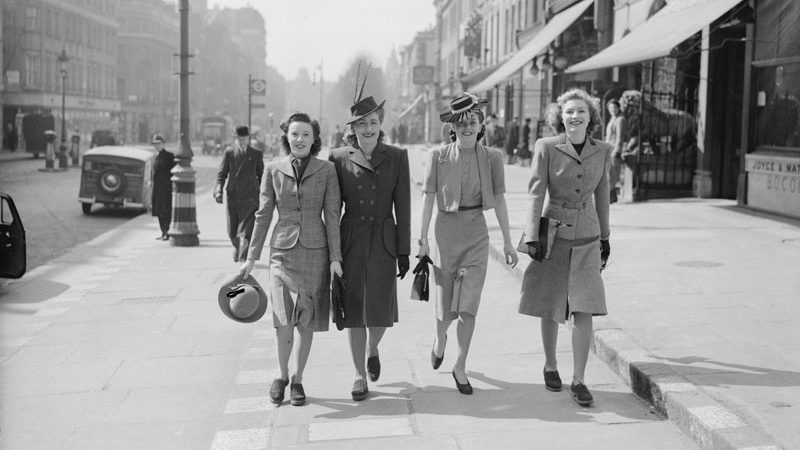 As I sit and wait for the call to connect with Amanda Mason, the historian behind Fashion on the Ration: 1940s Street Style, a new exhibition at The Imperial War Museum North, I wonder what it is about clothing from bygone eras that has piqued our interest.

Vintage clothing has seen a surge in popularity over the last few years with pop-up fairs, independent retailers and even larger high street names promoting lines of ‘reclaimed vintage’. When I think about my own love of vintage clothes (I am currently sporting a black and silver, oversized jumper circa 1980s complete with shoulder pads) I realise the appeal lies in their past, their narrative.

“Fashion gives excellent insight into the everyday experience of people living during a particular time,” Mason agrees. “It’s easy to look back at the 1940s through rose-tinted spectacles, even though it was actually a really hard period, because fashion was something people could have a little control over and relish. The clothes were actually quite joyful.”

The exhibition was first commissioned for The Imperial War Museum in London during mid-2012 and ran until summer 2013. Due to its popularity, the decision was made to transfer it up to the North and more content was added due to the larger space.

The exhibition begins by looking at the introduction of uniform before moving on to practical clothing and how that developed as a reaction to wartime conditions.

“It was obviously quite a big change,” says Mason. “If you were out and about on the streets, almost immediately you would start to see people in uniform. Uniforms did influence civilian styling of clothes and people would dress a lot more practically at work and at home.”

Clothes rationing, much like food rationing, was a scheme devised by the Government in order to not only prevent waste, but to redirect labour from textile manufacturing into making other things as part of the war effort. 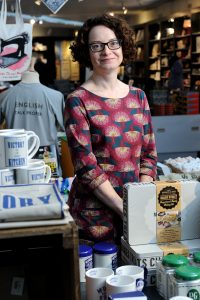 “The Government was quite keen to have more control over production and some companies like M&S did very well out of it because they were heavily involved with making utility clothing.”

But it was not just the redirection of workforce that caused fashion during the 1940s to alter. Glossy magazines such as Vogue and Good Housekeeping were allowed to keep printing despite a paper shortage because the Ministry of Information recognised that they were a key source of information for women, and they were very keen to get the right messages across.

“Vogue has been a very important resource for us during this exhibition because it tells you so much about the sort of messages women were being given but also because of the adverts and articles. It’s really a fascinating resource for what the world of fashion was like during this period.”

Women, in particular, were very much encouraged to keep up appearances and campaigns like ‘Make Do and Mend’ were widely publicised. Does Mason think that this prompted women to be more creative?

“I do think it encouraged people to be more creative because they had to be. They had limited amounts of clothing so they’d want to give themselves more personal style and individuality. Some of it is practical and some of it is about making it look better.”

The exhibition ends by taking a look at the legacy left by rationing during the years after the war because, as Mason reflects, “people were affected by austerity measures for a long time”.

My grandmother was married in the 1950s and I remember looking through her wedding album when she mentioned how difficult it was to get the material for her dress. So, has rationing had a lingering effect on the fashion industry?

“It bought a lot of standardisation and approved production in clothing. Which I think had a long term impact in the way the British fashion industry works.” 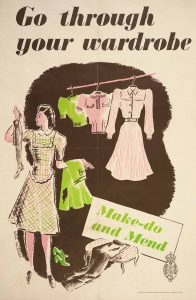 The Government was concerned that people would think utility was meddling in fashion, so when the scheme was introduced, high end designers were commissioned to create prototypes and lend their names. “That concept was the first time this had ever happened. There was the expectation that ordinary people could have well-made clothes and you see that today in the fusion ranges with big name designers creating for high street stores.”

Fashion on a Ration opens in May 2016 and will run for 12 months. For lovers of vintage fashion and social history, there are several items on display which weren’t in the original London exhibition and are well worth a look. Which of these new additions, I ask, is Mason’s favourite?

“New on display are a couple of pairs of shoes which are incredibly stylish and are made from bits and pieces from an aircraft factory,” she describes excitedly. “They were made by a designer who used cork, Perspex, rubber, felt and suede to make these amazing shoes as a creative outlet for various women who worked in the factories. There are a couple of them going on display and they look like something you could go buy today. They certainly don’t look like something made of scraps, or even from the 1940s.”