Lynne Bateson March 1, 2018 Northern Soul writes..., Surfin' USA Comments Off on Flying the Flag: “Isn’t freedom what America is supposed to be about?” 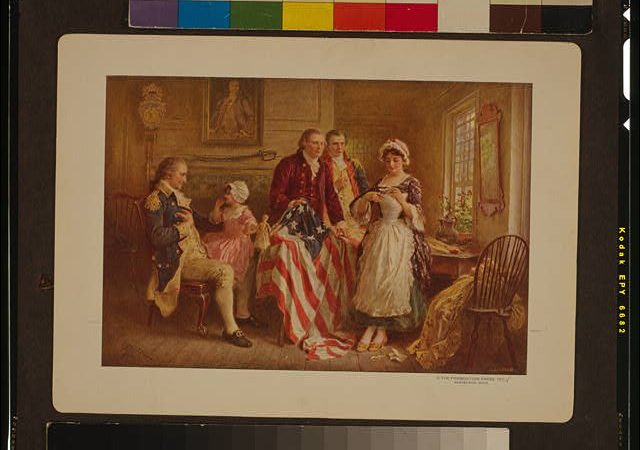 The sight of the Stars and Stripes gently fluttering in the blue sky has always enchanted me. I’m not sure why. Maybe the psychic who told me I’d had a turbulent past life here in America was right? He reckoned I’d been around in 1776 when, legend has it, Philadelphia seamstress Betsy Ross sewed the flag.

Yet I feel most like a foreigner here when I’m among flag-waving – literally and metaphorically. Too much patriotism has always made me deeply uneasy. There’s a thin line between patriotism, loving your homeland and the kind of nationalism in which you show you feel superior to other countries. The US gets perilously close to crossing that line and, some would argue, it has especially done so lately. But whatever one’s views, intense patriotism seems a permanent fixture here, regardless of who is President.

I understand that America is a relatively new country still bursting with the enthusiasm of youth. I know it needed patriotism to establish a separate identity from Britain and to glue immigrants together. But children blindly repeating the oath of allegiance with right hands over their hearts at the start of the school day smacks of brainwashing. Interestingly, the hand on the heart only dates back to 1942 when the previous gesture of stretching out your arm was judged a little too like a Nazi salute. I’d much rather children were taught about the magnificence of the First Amendment protecting free speech.

I’m furious when American footballers are accused of “disrespecting” the flag by kneeling on one leg – so-called “taking a knee” – instead of standing. They’re only exercising their constitutional right to protest, in this case against the treatment of black people. Isn’t freedom what America is supposed to be about? Isn’t it a founding ideal? And surely kneeling, which has always been associated in most minds with prayer, ranks pretty low on the scale of civil disobedience.

When boy scouts chanted USA at Trump as he was speaking about the repeal of Obamacare last summer, I winced. When Republicans lustily chanted USA at President Trump’s recent State of the Union speech, I winced again. I felt the same when the crowd shouted USA at Obama when he won the 2008 election, and at his motorcade after the 2011 death of Osama bin Laden.

Of course, politicians everywhere, of all shades, are tempted to use patriotism to manipulate the public. Samuel Johnson’s pronouncement that patriotism is the last refuge of a scoundrel was made a year before America was born. But US patriotism, at times, seems particularly bellicose.

Some countries are proud of their literature, some are proud of their food, others their scenery. The patriotism in America, a nation born out of armed rebellion, is understandably rooted in the military. On the plus side, this means Americans serving, or who have served in the military, get treated with respect, if not looked after financially. But it also means those against a war are often accused of being unpatriotic. As always, as about everything, the US is a country deeply divided.

Somehow Britain manages to do homage to its military and other institutions with quiet dignity, without heavy chest-thumping. And it expects them to take a ribbing, good-naturedly. My partner Bill remembers as a boy hearing young lads in London bellowing after soldiers “it’s a good job we’ve got a navy!” Such joking would not go down well here where movies about the military are almost guaranteed box office successes.

A confident Britain, which knows it punches above its weight, can relax and enjoy its patriotism. Witness the laughter and the happy smiles of the audience and the orchestra during Rule Britannia on the last night of the Proms.

I yearned to be amid the sea of Union Jacks at the London Olympics in 2012, where the mood was celebratory and fun, jolly, not jingoistic. There was Shakespeare, The Beatles, Harry Potter. And even the Queen showed she didn’t mind sending herself up in a cameo with James Bond star Daniel Craig. When I watched Britain’s tribute to the National Health Service with children in pyjamas doing gymnastics, I cheered. It almost made me homesick – quite an achievement.

The UK’s divisions may be getting more pronounced and Brexit has stirred up nationalism. However, I’m betting on the survival of the peculiar and charming British brand of patriotism. I miss it, though I was often accused of being unpatriotic there. In some ways, I’m like one of those people Theresa May accused of being “a citizen of nowhere” because I like to think of myself as citizen of the world. Maybe that’s why I didn’t mind too much renouncing my allegiance to Britain when I took my oath of US citizenship? And happily, the renunciation was theoretical, since in practice the US recognises (and I hope will continue to recognise) dual citizenship. 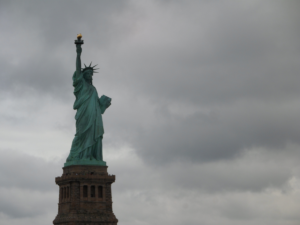 For some of us, technology has made where we live less important for identity. I’m a Northerner and a Londoner. I’m British and European. And now I’m an American.

More than half of Americans, of all ages, own a US flag and about the same number have items embellished with it. I’m one of them. I’m a proud owner of a Stars and Stripes hot water bottle cover, a shiny flag brooch that I’ve worn on Independence Day, and red, white and blue safety pins. But, for me, the emblem symbolises the freedom to criticise a country I have chosen to live in, and that I love.

I applaud Senator Carl Schurz who, in 1872, put his own spin on an old saying: “My country is the great American Republic. My country, right or wrong; if right, to be kept right; and if wrong, to be set right”.