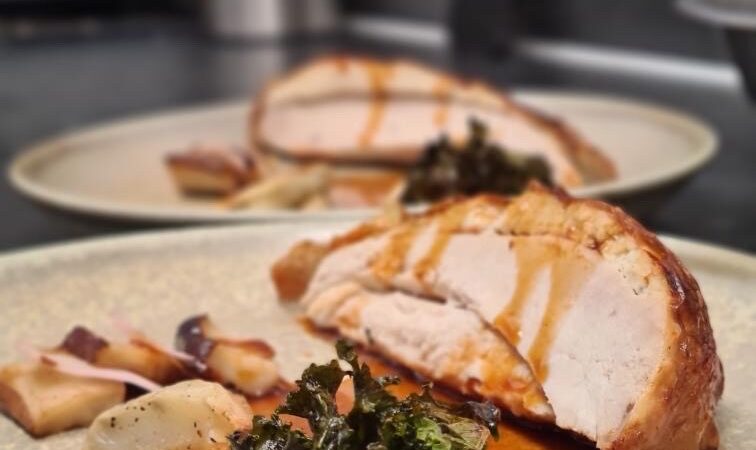 During the first lockdown, when the great and the good were allegedly being ambushed by cakes, I contented myself with a weekly bike ride to the Northern Quarter and Ancoats in Manchester. My first port of call was to The Butcher’s Quarter on Tib Street, then on to Campanio Bakery. All I needed was a candlestick maker for the full set.

Then, last year, The Butcher’s Quarter opened another branch with a deli and tasting rooms on Deansgate Mews, just across the road from where I live. I couldn’t believe my luck. As much as I like cycling, it was always a precarious journey through central 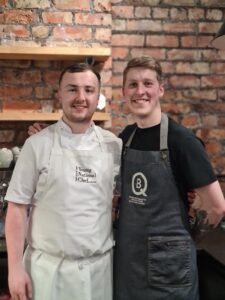 Manchester where drivers seem to take great pleasure in playing whack-a-mole with my health. A quick jaunt across Deansgate and up the stairs would be all the risk I needed to take to secure my weekly meat requirements.

During New Year, BQ announced that they were closing the meat counter and repurposing the Mews as a sometime wine bar and events space. With the Mews being tucked away, footfall was always going to be a problem. They reopened last week with a supper club helmed by up-and-coming chef, Keaton Cooper. It was, I have to say, a treat and a privilege to sample the food and wine on offer. Cooper has form as demi chef de partie at the Michelin-starred Angel at Hetton and as Young Chef of the Year Finalist. He is a star in the making. 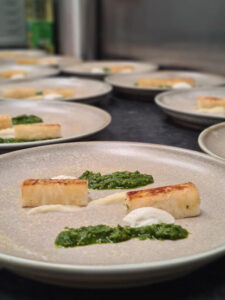 We start with a cheese and onion tartlet with pancetta jam. The jam, onion purée and Wee Corrie cheese marries with a light short crust pastry that melts in the mouth. It is paired with a Bone Marrow Gibson. Mixed with a Scofield’s vermouth. The bone marrow gin is a unique blend distilled by Manchester Gin and BQ. You could live off it.

Our primo is a lamb neck Angolotti with ricotta and a gorgeous, caramelised celeriac gravy. It is set on a bed of nasturtium and watercress pesto, and it is probably the best pesto I have ever tasted. A glass of deep red Crozes-Hermitage matches the pasta almost to perfection.

The main is a roast chicken crown with artichoke and crispy kale. The dish is finished with a rich reduction of Madeira jus. Paired with a light Santenay Rouge Les Hates Pinot Noir, it’s a sumptuous plate of food. To end, I have a not-too-sweet Chocolate Orange laced with Grand Marnier and cardamom, washed down with a glass of San Emilio Pedro Ximenez, which tastes like prunes and raisins. 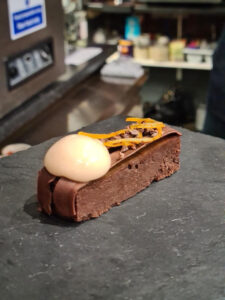 All told, it was a true gourmet’s evening. Good food and wine and, I was going to say, ‘good company’, but as I was on my own it would have been a humble brag. Charlotte and Lucas from BQ kept a kindly eye on me to stop me going stir crazy but the supper kept me humming all night. I did have a chat to Keaton on the way out and thanked him for his culinary skill before we were diverted by the fact that we both have irregular right ankles and a penchant for Birkenstock Bostons.

To Keaton and everyone at BQ, thanks for an extremely tasty night. It’s a shame that the meat counter is shut but news is that they’re soon to open a Farm and Fish branch in Monton. In the meantime, I will return to Tib Street for my half pound of mince (227 grams). Like Tebbit’s dad, I will get on my bike and face the whack-a-mole.