A River Runs Through It: Northern Soul cheers on the Bankies

Robert Hamilton March 3, 2017 Uncategorized Comments Off on A River Runs Through It: Northern Soul cheers on the Bankies

At various times in my life I lived at 12 Stewart Street, Dalmuir in the borough of Clydebank.

It was the small tenement flat of my paternal grandmother, Kitty Hamilton, who I knew simply as Gran. The local football team was Clydebank who played in various levels of the Scottish Football League including the Premiership. I followed the ‘Bankies’ because of its family association and because it was a change from the usual Celtic/Rangers divide that still dominates Glaswegian football loyalties.

Despite various deals and financial support, including a sponsorship from local boys dun good, Wet Wet Wet, the Bankies went bust in 2002. The famous Kilbowie Park was redeveloped into a supermarket, and the club was sold to Airdrie United.

Clydebank FC ceased to exist and I moved on to other teams.

Or so I thought until late last year when I visited Glasgow and a random conversation with a cab driver informed me that the Bankies were not only alive and well, but were playing in the West of Scotland Super League, Premier Division, ground-sharing with Yoker Athletic at Holm Park. I felt elated, as if I’d rediscovered my roots, and I resolved to go to a game.

This is the story of that day. 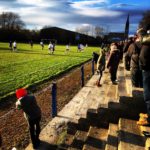 I picked the derby game against Yoker on February 11. It was a big game so I e-mailed ahead to make sure there’d be tickets available. Within two minutes I’d received word that entry could be purchased from the gate on match day and that they hoped I could make it.

It was a done deal. I was determined to go. Only two things could stop me: the weather and the trains. February in Yoker, on the banks of the Clyde where the ground stands, can be bleak, and I learned from Twitter that a few games had been called off due to waterlogging. But at least the weather could be predicted. In comparison, the trains were a lottery. I was due to arrive in Glasgow at 12.30pm with kick off at 2pm. Time enough if there were no delays.

Luckily, I arrived with enough time to sink a pint of heavy in the Horse Shoe Bar around the corner from Central Station. There was a big cheer as I walked into the bar. Had the news of my seven-hour round trip to see the Bankies reached the drinking dens of Glasgow? Was I a new Shackleton or Scott?

Alas not. Celtic had just scored in the early game.

Slightly deflated, I asked for my pint in the best Scottish twang I could muster. In my head I sounded like Rab C Nesbitt but in reality I suspect it was more Star Trek‘s Scotty. 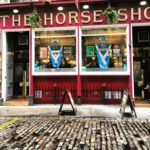 I headed back to the station to catch the train to Yoker. As fate would have it, the train was full of theatre-goers on their way to the live production of revived Scottish TV classic, Still Game. At first I thought they might be going to the game but cries of “meenayacow” (a catchphrase from Still Game) dissuaded me of that notion. After they disembarked the carriage was empty save for an odd couple who ironically could have appeared as eccentric extras on Still Game. I stared out of the window to avoid eye contact.

I’m as bad at judging numbers as any police officer so I will simply say that a decent crowd turned up for the game, and that £5 gained me entrance to the big derby. It was a cold wind that blew off the Clyde but the sun shone as the players ran out from the club house towards the centre spot. 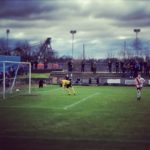 As games go I really enjoyed it. Within ten minutes Clydebank were 1-0 up thanks to a well taken penalty by Nicky Little. Some 20 minutes later, Yoker were down to ten men when Davey Bailley was sent off for two yellow cards. Yoker bravely held the Bankies at 1-0 until late in the game when two quick goals by Joel Kasubandi saw the final score at 3-0. It was a cracking game and the right result made me happy. The crowd were friendly and the banter wry.

The feeling in my legs eventually returned as the train passed through Carlisle on my way back to Manchester. I thought about my days in Dalmuir when my Gran had provided me with sanctuary when I needed it, and the best mince and tatties I’ve ever tasted. I’m glad I went as it was discovering a long-lost part of my life and a memory so warm and dear to me.

I’ll certainly embark on the seven-hour round trip again. As I write, I can still hear the refrain of that old song in my ear: “He’s fitba’ crazy, he’s fitba’ daft, since Robert became a member of the Bankies fitba’ club.”