After writing my last article about the properties of early Spring flowers, I realised I mainly research herbs with recognised herbal benefits, often overlooking the common wild flowers I have known all my life. So I wondered what forgotten uses other familiar Spring flowers might have.

In previous centuries the powers of flowers have been common knowledge and our forebears utilised our native blooms in a wide variety of ways. Some of these methods are fascinating but best left in the past. However, it is worth reacquainting ourselves with some of them.

A wood heavily carpeted with bluebells (Hyacinthoides non-scripta) is one of my favourite sights, and a sure sign that warmer weather is on its way. Unfortunately the introduction of the Spanish Bluebell in the 17th century has left our native bells under threat. Numbers have also dwindled with the erosion of their natural woodland habitat. Both species are highly poisonous but despite this I’m ashamed to say that as a child I loved to collect bunches of bluebells, filling jam jars on my bedroom window sill with their drooping lavender flowers.

Occasionally a bulb would pop out while I picked it and the gummy goo would make my fingers unbearably sticky. In centuries gone by this glutinous substance was used to glue paper and to secure book spines. The herbalist William Turner writing in 1568 claimed that “the boyes in Northumberland scrape the roote of this herbe and glew theyr arrows and bokes wyth that slyme”. It was the bulbs’ natural starch which created such good glue and made the substance equally valuable for laundry and creating the ruff collars and cuffs fashionable in the Elizabethan age. These days bluebells are an endangered, protected species supplying early food for bees and butterflies – so plenty of reasons to look but not touch. 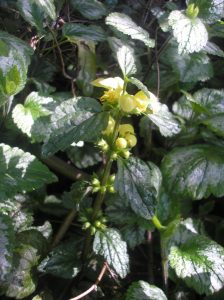 Yellow Archangel (Lamiastrum galeobdolon subsp. argentatum) has precisely the opposite problem as it’s a highly invasive plant. True Yellow Archangel (Lamiastrum galeobdolon) is a wild woodland plant but the kind with the variegated leaves that covers banks and lay-bys is a garden escapee. Despite its bad reputation it is an attractive plant and I often pick it to use as foliage in bouquets. Many report that when crushed or picked the plant smells unpleasant. I think it has a slightly perfumed odour – but this could depend on the subspecies.

In herbal medicine the plant was once a country cure for bladder problems and Nicholas Culpeper, author of the 17th century The Complete Herbal, believed it to be excellent for curing old sores and ulcers. The herbalist John Gerard writing in the early 1600s suggested baking the flowers with sugar: “Which is called Sugar roset: as also distilled water of them, which is used to make the heart merry, to make a good colour in the face, and to refresh the vitall spirits.” This sounds far more tempting than eating the young leaves which, when cooked, are edible but not very appealing. Recent research has shown that Archangel contains phytoecdysteroids which protect the plant from insect attacks. This goes some way to explaining the plant’s ability to thrive and become a rampant nuisance. However, it does makes me wonder if the juice of the plant added to my watering can might also protect my garden herbs from unwanted insects?

In contrast, Lungwort (Pulmonaria officinalis) is a more unassuming herb with large velvety spotted leaves and bell-shaped flowers which bloom both blue and pink on the same plant. In herbal books Lungwort is always used as an example to explain the Doctrine of Signatures. This was an ancient theory which believed that a plant’s resemblance to a part of the human body meant it was designed by God to treat ailments in that area. With its spotted leaves the herb does resemble human lungs and was consequently used to cure them, hence its British name Lungwort and the Latin title Pulmonaria, meaning to be used for pulmonary troubles. Coincidentally Lungwort is good for chesty coughs and was once valued as a treatment for asthma and even TB.

Lungwort leaves are anti-inflammatory and possess mildly antibiotic constituents. An ointment made from the herb has proved soothing for a number of skin complaints such as psoriasis, eczema and sunburn. In the 14th century Lungwort was combined with Wormwood to make a remedy for bubonic plague, probably with mixed results. Like other members of the borage family the leaves are edible but have a slightly unpleasant texture which are more palatable when steamed.  I have read that the leaves are also used to make vermouth…I can feel more wine-making coming on. 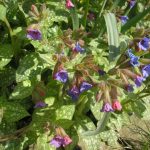 DISCLAIMER: These are some of my personal experiences of using the above herbs combined with information I have researched over a number of years. I am not encouraging people to self-medicate; in the treatment of specific conditions it is best to consult a herbalist or your GP. Always check if any pharmaceutical medication you are taking is compatible before trying herbs.  If you should develop an adverse reaction to any of the herbs mentioned above please stop using them immediately. Always take care when identifying plants.