Is there anything more quintessentially British than fish and chips?

It’s a meal that conjures up all sorts of memories, especially those that take us back to childhood. For me, a chippy tea was a Friday after-school treat. To this day I still crave a pickled egg after a night out and, as a Scotsman, I’ve seen all sorts of questionable things battered in a chip shop (the classic deep-fried pizza can also function as a target for clay pigeon shooting).

But can you put a new spin on an old classic? It seems so, as Jonathan ‘Ozzie’ Oswald, co-director and founder of Manchester-based The Hip Hop Chip Shop, explains.

“The traditional idea of fish and chips is the bog standard chippy on the corner. A pillar of the community with big queues on a Friday night who come out with food wrapped in white paper that gets all soggy by the time you get it home. There will always be a place for that and for the high end, more expensive fish and chip restaurant. 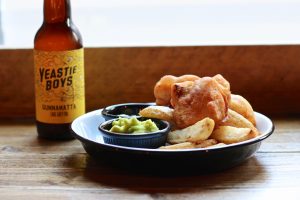 “But there was no one operating between the two, having a bit of fun with fish and chips and giving it some personality. This dish is not a fad. It’s been a staple of the UK diet for decades and was one of the very few meals not rationed in the war because of fears of morale going down.”

The Hip Hop Chip Shop recently took up permanent residency in the Kosmonaut kitchen in Manchester’s bustling Northern Quarter, and also operates an outside catering service which is in great demand. I ask Oswald how the whole venture began.

“I thought of the name in 2010 and was amazed that nobody else had come up with it before,” he explains. “My missus and sous chef Holly Robson and good mate and head chef Luke Stocks are my business partners and it took us four years to save up and set the business in motion.

“‘I studied business and marketing management at Salford University. As a kid on holiday I’d see people selling watches on the beach. I’d buy a load and sell them back at school. I’ve always wanted to set up a business and fish and chips was the idea that resonated and that I thought could work. Holly has been in hospitality for a long time and Luke’s been a chef for years. Add to that my digital marketing career and our combined skills covered all the bases.”

Images of bony fish with scraggy bits and chips you could hammer a nail in with are a distant memory once you’ve sampled what The Hip Hop Chip Shop has to offer. The regular chippy menu remains the blueprint for the team’s ideas but, as Oswald describes, it’s all in the execution. 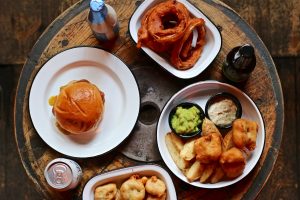 “It’s simple food done well and we spent a long time considering what approaches we were going to take. For our chips we keep the skins on, blanch and triple cook them and our fish is fresh every day. We also have beer batter crab cakes and sausages wrapped in bacon and chilli batter. Fish, chips and mushy peas is our best seller but we also serve a breaded Cajun chicken burger with battered pepperoni, manchego cheese and spicy coleslaw on a brioche bun that’s been a huge hit. I think the battered pepperoni is the trick. Basically we’re offering an alternative that’s more of a treat.”

He adds: “People travel to come and get our food. What’s rewarding is when someone from the older generation who has grown up with fish and chips tries the food and says it’s the among the best they’ve ever tasted. That’s the most rewarding feedback we could have.”

Positive word of mouth is a vital part of business growth but another essential aspect is digital promotion. Coming from an online marketing background, Oswald is aware of its power.

“I wish it wasn’t as important as it is to be honest and I don’t like all those inane ramblings on Twitter, but an online presence is undoubtedly helpful for a business. Good reviews and ratings can even make people think they’ve had our food already. I tweet funny stuff just to show that it’s humans behind the company, rather than some corporate machine. We opened at Kosmonaut in October and it’s gone really well saleswise and we’ve had great reviews. People are really keen to support an indie business doing new stuff.” 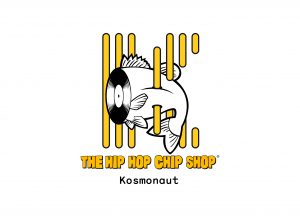 As well as the new base in the Northern Quarter, the company is also in demand from across the UK and beyond.

Oswald says: “Our trailer has recently been in Edinburgh and Leeds and is booked up months ahead. We’ve even been approached by people as far afield as Seattle and Dubai. There’s only enough resources we can have at this stage though so it’s all about taking a logical progression one bit at a time. It’s not about ruthless expansion, it’s about making something robust with no cracks. We’re ambitious and as a brand it could become a worldwide franchise but we want it to grow in the right way.”

Being around delicious food all the time must be a blessing and a curse. If you love what you make then it must have an adverse affect on the waistline. Oswald says you only need one thing: restraint.

“I’m not always in the kitchen and am often out here, there and everywhere so when I get back I really get a hankering for our food and am never sickened by it. So it’s not a hard sell for me because I love it.”