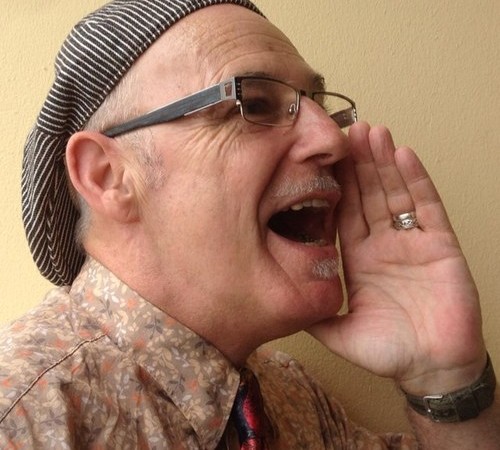 “I mean, look, face it: if you turned up somewhere and there was this 65-year-old bloke singing The Toppers’ 1954 classic Baby, Let Me Bang Your Box on a ukulele, you’d wonder where he’d come from.”

In the bar at HOME in Manchester, Dr CP Lee is telling Northern Soul about the enthusiastic, even astonished, reception he had in Ireland earlier this year when performing solo in public for the first time in a good while. “Some friends in Ireland were holding a festival in a town called Ramelton and they invited me there as, bizarrely, top of the bill. So I worked out a set and it went down very, very well. But lots of people were coming up to me going, ‘where the hell did you come from?’”

To answer that question, Lee was born in Didsbury in 1950. Growing up, he was bewitched by the revolutionary rock music of the era. He attended Bob Dylan’s legendary show at the Free Trade Hall in May 1966. A year later he met Jimi Hendrix outside the Top of the Pops studios in Rusholme. By then Lee already had his own band, Jacko Ogg and the Head People, and went on to form folk-rock combo Greasy Bear, as managed by celebrated music scenester Roger Eagle. But Lee’s greatest success was as leader of the irreverent comedy rock troupe Alberto Y Lost Trios Paranoias, one of the most beloved local live attractions of the 1970s. They cheerfully skewered any passing musical genre, from denim-clad pub rock (Heads Down, No Nonsense Mindless Boogie) to Lou Reed (Anadin) and heavy metal (Mandrax Sunset Variations). When punk came along, they skewered that too, with the immortal Gobbing on Life. 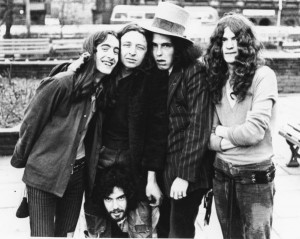 In 1977, Lee and the Albertos brought an anarchic musical stage show, Sleak, to the Royal Court in London, to box office-busting success. An ill-fated New York production in late 1980 was bankrolled by the likes of Pink Floyd and The Clash, but the band had just lost talismanic member and key Sleak component Les Prior to leukaemia. They went ahead and made a suitably unhinged TV sketch show, Teach Yourself Gibberish, for Granada in 1981, only to call it a day shortly after. Lee proceeded to recreate himself as a broadcaster and esteemed cultural historian, completing a PhD on the subject of the Manchester music scene – hence his title ‘Dr’. Since then, his day job has been as a film studies lecturer at Salford University, right up until his retirement earlier this year.

Now Lee is launching an ambitious new live show, Just One Alberto, springing off from his Ramelton appearance and using it as a rough prototype. “I thought it would be really nice to do it in Manchester just to see how it goes down, and after that, who knows”, Lee says. “It actually reflects my love of Variety and I’ve combined that with playing music, which will include some Albertos stuff. But it also includes lots of things that I’ve been interested in for yonks, like ventriloquism. We’ve got Old Charlie, the Glaswegian thug puppet. And we’ve got Jolly Roger: Pirate Puppetry, who not only does mind-reading and acrobatics, he also does ventriloquism himself with his puppet Mr Sticks, who is actually a stick. There’s Sausage Theatre as well, which could be interesting if I’ve not eaten them before the gig.”

Lee is a great admirer of the post-war American stage performer Lord Buckley whose unique act had been described by Bob Dylan himself as “the hipster bebop preacher who defied all labels”. Previously, Lee has revived Buckley’s persona and material for one-man shows, and he’ll be materialising as MC here. “You’ll get half an hour all introduced and led by the late, great Lord Buckley. I’ll be channelling his spirit.” Indeed, if things go to plan, Buckley will be regaling the audience with his own distinctive retelling of Wolf Hall.

Another of Lee’s all-time favourite performers is wayward Lancashire Variety superstar Frank Randle, whose spirit will also infuse proceedings. “There’s a little bit of Frank in all of us, I feel, no more so than within me. The spirit of Randle and the spirit of Buckley – an unlikely combination, a Northern drunk and an American weirdo – come together to create this show, really. Because the whole Variety show idea comes from me having looked back at Frank Randle programmes and stuff like that. And that, interspersed with the wiggy weirdness of San Francisco 1955 thrown into the mix…what should we call it? Maybe ‘acid panto’.” 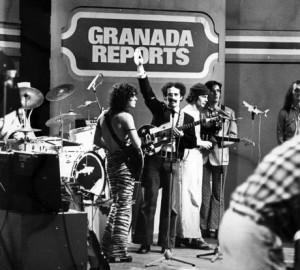 Among the musical delights on the night, the audience can expect special guests Vocal Harum, a delightful vocal ensemble from Levenshulme, and Lee himself doing a wide-ranging solo set. “There’s a folk section, an Arthur Lee and Love section, an Albertos section, and a wacky section.” Throughout this, Lee will be accompanying himself on the ukulele. The show will be held at the venerable Portico Library in Manchester city centre.

“It’s a fantastic venue. It reminds me inside of the Unity Chapel in London, in that it’s just so weird and odd. It really is Manchester history, and to do a gig in there – well, I’m deeply honoured that they’ve allowed me to do it. And there’s the fact that they know it’s a little bit blue but they’re going to go for it.”

In his time, as both participant in and chronicler of the Manchester scene, Lee has known all the big names. When a young Tony Wilson graduated from Cambridge and moved back to Manchester to work for Granada, Lee befriended him and initiated him into the thriving local music scene. “We were very, very close friends for quite a few years – until the Hacienda, really. There was no falling out. I just didn’t like clubbing. And there were a few musical differences. It’s like a group splitting up, isn’t it?”

Wilson is the subject of Mike Garry‘s poem St. Anthony, which has just been released as a single with proceeds going to The Christie, a specialist cancer hospital in Manchester. Lee gestures around HOME, noting its postal address (2 Tony Wilson Place). “I find it absolutely hilarious that I’m sat in Tony Wilson Place when he refused to use the shortened version of his name. He said that we had to use his christian name as he had been baptised with it, and when he got an audience with the Pope, the Pope told him that he had to use it. So he insisted on calling me Christopher and he insisted on being called Anthony. And to honour that that belief in Roman Catholicism, Manchester has seen fit to call him ‘Tony’! As regards St Anthony, well, it’s great. It’s got to be good, because it’s for Christies, to whom I owe my life.” In 2013, Lee survived a brush with cancer. “I got the big ‘C’ and I could have come to a full stop, but now I’m a semi colon – as I’m often found to be saying. So if it raises money for Christies, great.” 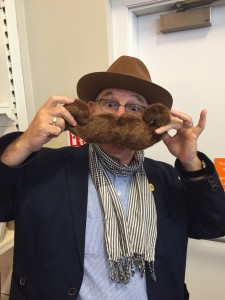 Lee was one of the producers of the 1978 Factory Sample EP, the debut release by Wilson’s record label. Another of the producers was Martin Zero, aka Martin Hannett, who became a key component of Factory as the architect of Joy Division’s sound, as well as many of the label’s other bands. Hannett was also a good friend of Lee’s: back in the aftermath of Greasy Bear, the two played gigs around Manchester with Hannett on bass.

“There was hardly any music scene in Manchester then and we scoured the city for unlikely venues, like the back room of Ivor’s Boutique on Market Street or The Penny Farthing gay club on Whitworth Street,” remembers Lee. “These places that, because they were so far beyond the pale, would put music on and allow you try it out and if it made money on the bar for them, they were quite happy. Martin’s situation at that point was that he regarded playing live as so exciting that he would sit on a little camp stool with his back to the audience. But they were great gigs. They were very exciting times – they are, though, when you’re 20-odd – but it was five years before punk, so that was our misfortune. Martin did alright, I did alright, but it would have been even more exciting to have ridden that wave.”

As for Manchester today, Lee has strong, but divided, feelings.

“At this precise exact moment in time, I’m furious with Manchester and I’m ashamed and embarrassed to bring anybody to visit the city because it’s a giant bloody building site. I think they’ve completely mismanaged it. I think we’re run by a one-party state of buffoons whose ignorance is beginning to show and become abrasive, because they feel they can ride rough-shod over anybody. But as for Manchester pride, well, I can think of no other city that’s spawned so much. Not even Liverpool. Liverpool still tends to be very Beatle-centric. Manchester is unfortunately sinking under its own weight in Factory memorabilia, but there’s an awful lot of other stuff going on here.”

And with Just One Alberto about to add to Manchester’s cultural smorgasbord, Lee reflects that he’s never really lost the performing bug. “I was bitten by it as a youngster, yes. I remember being put on the pub counter and singing for pennies. But every 27-year old’s done that, haven’t they? So yeah, I can’t help it. I can’t help it. Put me in a room full of people and I have to dominate them with my cunning wit and stealth.” In that respect, his academic career was really just another branch of performing. “Being a lecturer was exactly like being a rock musician. But with less roadies.” 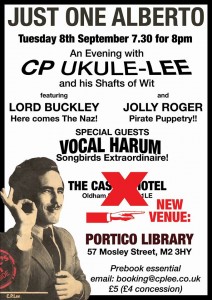 What: Just One Alberto – An Evening with CP Ukule-Lee and his Shafts of Wit