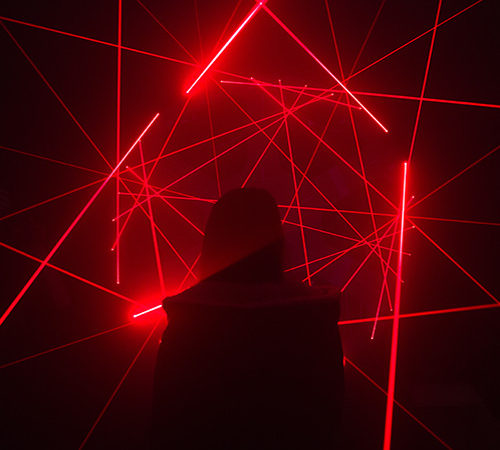 I’d enjoyed a cool and heady journey on my way to the taster event for The Lowry’s biennial Week 53 festival.

On my train there were facially bejewelled girls going into town to celebrate their last day in seniors. No gauge of noise level, no sense of direction, no worries, no cares. On getting off the tram at Salford Quays I was greeted by a gang of lads diving in to the water, summer in front of them – the holidays had begun with a splash. Everything felt young and fresh and buzzing.

The tag line of Week 53 festival, which returns next year, is ‘Stay Curious’, and the showcase was a new laser installation by Marshmallow Laser Feast entitled IRIS as well as Tim Peaks Diner, a pop-up spoken word and music event created by Charlatans front man, Tim Burgess. 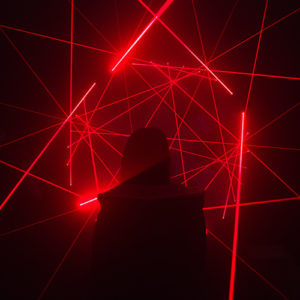 On arrival at The Lowry there were Copa de Balon glasses full of Manchester Gin and tonic with rosemary and orange as far as the eye could see, and the mini halloumi burgers were well fit. Boy, does The Lowry know how to show a girl a good time. We were then taken into The Lyric theatre for IRIS, a six-minute laser installation beamed across the audience (it will be shown before every show during the 2018 Week 53 festival). Wherever you sit, you’ll have a different view, and it’s underpinned with a string instrument composition that mirrored the art work’s string element.

I think the best element about IRIS will be the opportunity afforded to audiences to experience art they may not usually see, and whatever show follows will retain the residue of the art work.

When the light creeps over you, you do feel a sense of something, it’s a bit War of the Worlds, a bit searchlight, but personal too. And slightly intimidating in the moments when it feels as if it comes for you and red light crawls over your hands and body.

The Lowry knows how to put on a show. And though I don’t think IRIS goes on long enough, it’s special, feels frivolous and is fun. Also, The Lowry introduced me to Manchester Gin which I shall be enjoying in a similar way in the future – with rosemary and orange slices, before me records come out, the ice melts and it becomes gin and vimto or whatever we have in the house.

The whole night from start to finish felt like it was all about the young adults, the kids on the train, the kids swimming, and the kids ushering us around the theatre who were released from duties after the show and left to enjoy the rest of the evening’s entertainment.

The night continued to buzz with Tim Peaks Diner. An eclectic mix of music acoustic from Mr Burgess topped off the night and everyone went out into the gentle night buzzing.