“It’s escapism into a different world for a weekend.” Luke Bainbridge on the Lake District’s new Aerial Festival

When Luke Bainbridge first started going to festivals in the early 1990s, only a handful existed with some offering the mere basics in entertainment.

“Reading Festival was literally some tents in a field,” says Bainbridge, whose previous roles include head of arts at Festival N°6 and deputy editor at Observer Music Monthly.

Oh, how festival culture and music consumption has changed since then. CDs shift fewer units year-on-year and, in real terms, the vinyl boom equates to a tiny number of sales. Instead of buying music, people stream at vastly reduced prices, preferring to splash cash on experiences linked to music.

“They want to be taken away, it’s escapism into a different world for a weekend,” says Bainbridge of the festival phenomenon. “[At festivals] people don’t want to see a band on tour just touring their latest album, or an author who’s on the publicity circuit promoting their latest book”.

This is the reason, in part anyway, why he and Kendal-born Sam Hunt (formerly creative director of London Borough of Culture) co-founded Aerial, a new festival of contemporary music, literature and performance in and around Ambleside later this month. Yes, March. In the Lake District. Outside of the traditional festival season and at what can be an inclement time of year (ne’er cast a clout ’til May be out).

“It’s a bit risky weather-wise, but a lot of the performances are inside. The stone circle’s outside. And the Windermere steamer. But it’s not a festival where people are camping. The audience will be local or staying in B&Bs. We’re protected from the weather in that sense.”

With talk of stone circles and a steamer on a lake, the ethos of Aerial is artists reacting creatively to the surroundings and performing bespoke works in unconventional locations. Somewhat aptly, there’s an evening retelling of Richard King’s Lark Ascending, a book exploring the relationship between creativity, music and the British landscape. The beauty of the Lake District’s scenery makes it a magical place to escape to, and the name Aerial was inspired by William Wordsworth’s poem Home at Grasmere:

The place whence he looked was soft and green,

Not giddy yet aerial, with a depth

Of vale below, a height of hills above.

Bainbridge says: “We could have found a football field and put up a big marquee. But that’s not what this is about at all.”

In his role as artist-in-residence, former Wild Beasts frontman, Hayden Thorpe, has composed 2020, a choral work created in response to the ancient stone circle Castlerigg near Keswick. Sung in traditional Cumbric by the Deep Throat Choir, each voice will represent one of 20 standing stones. The debut is at dawn before being performed at different locations throughout the festival. “It’s going to be at 5.45am,” says Bainbridge. “All power to Hayden for taking on that challenge. It’ll be pretty magical.”

At the beginning of the year, Richard Leafe, chief executive of Lake District National Park Authority, sparked a row by labelling the area white and middle class, saying there needs to be more diversity to attract a wider range of people. So, where does Aerial fit? Bainbridge stresses that the content of the festival is “leftfield” and home-grown artists are on the bill alongside bigger names like the writer and performer Kate Tempest. Some performances are free, the rest are individually ticketed so attendees can curate their own festival.

“We’re absolutely trying to appeal to a wide range of audience of all ages and backgrounds. Both local people and further afield. We’ve got what you’d say are middle class authors and musicians on the bill, but also more urban type acts like Aim and Niko. I wouldn’t say it was an exclusively white Guardian-reading audience. It’s got a wide range.”

By utilising caves, churches, a bus and a stone circle at first light, the choice in venues feeds into the idea that this is not an elitist festival. Rock and pop culture website The Quietus takes over an Ambleside pub of an afternoon of music and conversation while literary site Caught By The River presents a trip on a Windermere steamer featuring several authors and Modern Nature’s Jack Cooper.

Of How To Live, Modern Nature’s debut album from last year, Bainbridge says: “It’s weird, isn’t it? You think something is incredible and the people around you, your echo chamber, think it’s incredible. But you realise it’s probably not got the wider attention it deserves.”

Once the first Aerial is over, Bainbridge and Hunt plan to dive deeper into Ambleside’s DNA. Bainbridge is an enthusiast of Austin, Texas and its ability to take on a fresh appeal with a mass of creativity each March when the SXSW music, film and media celebration takes over the city. Bainbridge sees parallels and potential.

“I love the way there are gigs in every little place. Every hairdresser, launderette and clothes shop become a venue. We want to get to that stage, really, where we’re not just utilising church halls, but making this little pocket of the Lake District come alive.” 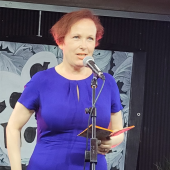 Kan at Band on the Wall, Manchester