“Throughout my adult life I thought I couldn’t draw.” Len Grant, sketcher, writer and photographer

Danny Moran December 16, 2021 Art, Arts Comments Off on “Throughout my adult life I thought I couldn’t draw.” Len Grant, sketcher, writer and photographer 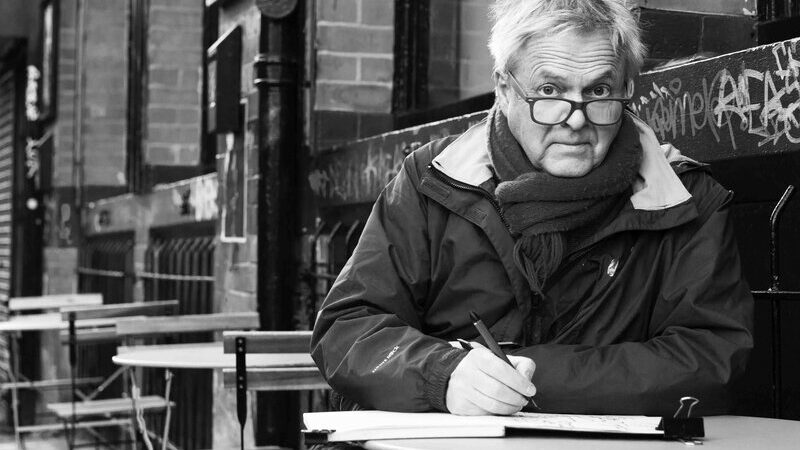 It was a sundry few hours in the company of a wistful crematorium technician, loading coffins into Manchester’s Southern Cemetery furnaces as they rolled through from the day’s funerals on the other side of the curtain. Howard, he was called. In Grant’s photograph (from A Way of Life: Portraits from the funeral trade) he stands before his ovens avoiding the camera’s gaze, fire gloves clasped in the performance of repose. It told a tale.

Grant has been telling stories with his camera for 30 years now and, more recently as a sketcher, with the pen. Most have been Manchester stories. I’d never met him until I took his picture for this piece. I’d just met Howard, the man in the photograph, some 21 years ago, albeit for longer than Grant ever did.

“As I recall, he told me he was having some mental health issues and thinking of changing his job,” Grant tells me.

Subjects captured at a moment of transition have been a staple over the course of Grant’s career. Death, homelessness, immigration, teenage motherhood, social cleansing and, perhaps above all, regeneration. From the destruction of the old Cardroom Estate to the construction of the Manchester Arena, Grant has documented the city’s rapidly changing landscape and its reflection in the faces of its inhabitants.

These days he says he’s happier with the pen than with the camera. “I think I was repeating myself, photographing regeneration over many years, getting similar jobs. A book about the building of a building…I wasn’t pushing myself.

“Throughout my adult life I thought I couldn’t draw. But I could sketch, which is different, you can get it wrong but it’s still right. It’s still storytelling. The things I can do as a sketcher I can only do because I was a photographer. It’s about the urban environment for me, about people.”