New arcade bar, NQ64, is the latest venture to tap into a strong sense of nostalgia among gamers of a certain age. Located in Manchester’s Northern Quarter, the entrance sits off the beaten path down the bottom of Short Street. Purple lighting in a dystopian setting points the way down a steep set of stairs, lending an air of exclusivity which belies the eclectic set of punters within. 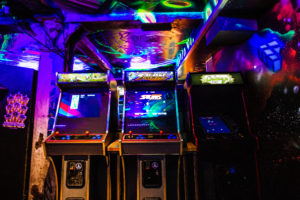 NQ64 combines grungy backstreet bar chic with retro gaming nirvana. Entry assaults the senses, with loud funky hip hop laying down the soundtrack to your gaming experience, as classic arcade machines line both sides of your passage to the bar.

Grafitti-laden walls provide a low neon glow as the setting opens up to reveal a range of arcade games catering to all tastes, from classics like Street Fighter and Double Dragon, that excellent Star Wars Trilogy game from the late 90s, to the titles which started it all such as PacMan.

Grabbing a pint of Hell Lager (most recommended) and a cup of tokens (currently £5 for 15), I hit the cabinets.

As always in such scenarios, I aimed to get my eye in with personal fave, Teenage Mutant Ninja Turtles. Readying myself for a bout of button mashing, I was immediately struck by NQ64’s attention to detail and consideration for the important practicalities of gaming with a pint. A handy little shelf runs between each machine, allowing slightly inebriated gamers to pop their drink and tokens within easy reach. One tip: keep your pint and tokens fairly separate. During a particularly engrossing game of Time Crisis 2, I tried to chug down my cup full of tokens and nobody wants paramedic intervention when they’re having this much fun. 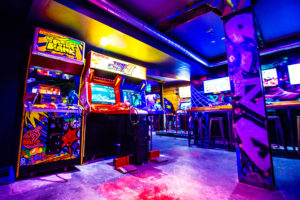 Playing an old school shooter with a pint while enveloped in a club-style atmosphere provides an interesting juxtaposition, but there’s no doubt it works for a range of demographics judging from this Thursday evening crowd.

Taking my seat at one of two Outrun multiplayer cabinets, I noticed a couple beginning a night out in the adjacent seats, having a great time running each other off the road. Across from me were some veteran gamers lining one wall kitted out with free-to-play retro consoles, channelling their youth through MarioKarts and Goldeneye. Meanwhile, a gaggle of younger girls behind me were revelling in the more energetic challenge of a rhythm dance game, hitting the mats like Alan Partridge on a bender. I also spotted a couple of blokes in suits enjoying a pint over an original space invader table which had found its perfect home in one of the dingier corners of the venue. 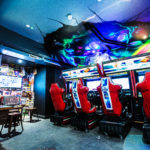 There’s no doubt a lot of thought has gone into the flow of NQ64’s experience, whether that be the backbox glare from a row of pinball machines pointing your path to the bar, or the front and centre Guitar Hero Arcade which allows those who have had several cocktails the option to indulge in their rock god fantasies.

Despite the fact that the bar is in its infancy, NQ64 already feels established and is obviously winning a lot of fans. Whether you’re looking for a great night out or the perfect after-work wind down, seek out the neon warehouse entrance and don’t look back. 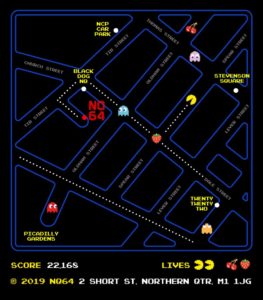