After slowly traversing the Saturday Christmas Market crowds of Manchester, I arrived at Soup in the Northern Quarter to be met with an industrial, New York-style basement and a bright drone of an organ mixed with the ambiance of a chattering crowd. Two towering blocks of speakers stood on either side of the stage and rusted metal air ventilators snaked around the ceiling. In the corner, the candlelit bar strobed and flickered. A group of people had pulled out chairs towards the front of the stage and sat waiting eagerly for the first act.

As Jarboe strolled leisurely onto the stage, her long sweeping willow hair hung down obscuring the sides of her face. Following closely wielding an 8-string guitar was P. Emmerson Williams, with a grey handlebar moustache and Catholic monk-style hair.

A deep choir synth ascended as Jarboe signalled the beginning of the set. Her lower eyelids glittered with the soft red glow from her sample pad. Meanwhile, her black padded slippers rocked back and forth on the sustain pedal, prolonging the deep airy chords. On top, ghostly vocal melodies and swelling guitar plucks bewitched, sending the crowd into an unconscious pendulum sway. Taking the lead for one song, Williams’ voice was tuneful with an Arabic-like intonation. A silver occult amulet pivoted above his guitar as he jolted with each haunting guitar slide.

Songs from Jarboe’s 1995 album Sacrificial Cake also made an appearance in the set. Low-rumbling bass drones sat beneath thrumming ancient sacred chants that morphed into peaceful and melancholic spoken word poetry. Her vocal vibrato resonated like a dragonfly wing flutter, vibrating the surrounding air. After each song, the stunned crowd applauded heavily. In a flow-like trance, Jarboe continued with unfettered spilling sounds of twinkling reverberating wind chimes and deep ringing chasmic bells. After gently dematerialising the thick atmosphere of sounds, the pair gave a humble nod of acknowledgment to the crowd, signalling the end of the set.

The former Swans vocalist and keyboard player will take the performance around Europe supporting Jozef Van Wissem to celebrate the re-release of her album Skin Blood Woman Roses. And so, as a mist set on the stage, Jozef Van Wissem emerged all in black with long, wizard-like hair. Eyeliner coated the rims of his eyelids and a spiked leather bracelet encircled his left wrist. The lute he carried was long, jagged, and medieval in nature, as were his songs. Performing his latest release, Nosferatu – The call of the death bird (issued, rather appropriately, on Halloween), the set took on the form of an atmospheric gothic ballad. His ability to construct a complex melody while playing a bassline with just one instrument was incredibly impressive and left the crowd in awe.

As I made my way home, my thought was, despite the passing of time, Jarboe’s voice remains a resounding world wonder.

For details on the remainder of tour dates, including ticket prices, please click here. 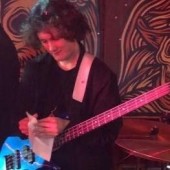 Brandon Charlesworth is a Leeds-born journalist who focuses on music journalism and Investigative journalism. He is especially passionate about music, plays bass in a Manchester-based post-rock group, and attends gigs around the UK. He specialises in live gig reviews, appreciating music of all genres. You can get in touch with Brandon via email at Brandon.charlesworth@outlook.com

Photo Gallery: The State of Us, The Lowry, Salford