It is a truth universally acknowledged that the Northern Soul scene has all the makings of a brilliant film. It’s got the lot: escapism, intrigue, tension, glamour, a clearly defined rise-and-fall narrative and, of course, a ready-made first-rate soundtrack. Not surprisingly, several potential Northern Soul films have been on the starting blocks in recent years. One even got made, namely 2010’s SoulBoy, but it was basically a sweet and so-so rom-com which used the scene as a backdrop. So there’s still room for a film on the subject.

Earlier this week, to launch their Manchester-wide music festival, BBC 6Music held this preview screening at Cornerhouse of writer-director Elaine Constantine’s new drama, titled simply Northern Soul (And why not? We think it’s got a good ring to it). Set in a dreary Lancashire town in 1974, it follows John (Elliot James Langridge), an introverted teenager told by his teachers that he’ll never amount to anything. John’s epiphany comes on a half-hearted trip to a local youth club disco when he meets the far more extrovert Matt (Josh Whitehouse). Specifically, he’s spellbound when Matt gets a turn on the turntable and plays Edwin Starr’s Time, even executing a suitably acrobatic dance routine. The pair strike up a tight friendship, and John’s new obsession with Northern Soul changes his entire life. His education and his family are swiftly discarded. Before long he’s living with Matt and doing a dead-end job, just so he can buy rare records and go to all-nighters at Wigan Casino. Needless to say, this precarious lifestyle has its dark side and it can’t last. 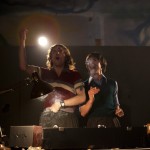 The film can’t be faulted for its authenticity. The loving, painstaking recreations of 70s Northern homes, youth clubs and, of course, Wigan Casino itself are hugely evocative, all playground insults, beige furnishings, dim lightbulbs and kipper ties. The design, the costumes, even the dance moves are pulled off with enormous, passionate aplomb. If there’s a problem, though, it’s with the script. It conjures up the period setting brilliantly but, as a piece of storytelling, it’s not the triumph it could be. Instead, it’s awfully flat and contrived. The dialogue is often clumsy and the characters flimsy and interchangeable. John’s trials and tribulations are achingly predictable, each turn of events clearly signalled by semaphore way in advance. We never feel particularly involved in what’s happening to him, or care much either way. Looking to music as a way out from a boring life, he’s basically a bland photocopy of Tony Manero in Saturday Night Fever or Jimmy in Quadrophenia. It makes for a strange void in the centre of the whole film.

Wigan Casino might be central to the film but it’s only used sparingly as a setting – understandably, as these scenes must have been a huge, expensive undertaking. In a way, though, that’s the hidden curse of any Northern Soul film, despite all those enticing elements. Just look at the famous footage from the Casino dancefloor: the dancers are amazing, aren’t they? But they’re all absolutely lost in the music, each one in a world of their own. That lack of actual interaction doesn’t make for great drama. Plus, as anyone over 25 will admit, you can’t hear a word when you’re out in a club: hence that canny scene in Trainspotting complete with subtitles. So how can you tell a great story when your key setting won’t let you? What’s more, John and Matt’s first visit to the Casino, withheld for a good while, should surely feel like Dorothy’s Technicolor arrival in Oz, and while it’s certainly visually impressive, it never quite feels magical enough. Elsewhere in the film, when the two friends aren’t dancing, they’re wishing they were and they’re bored. But as that accounts for the vast majority of the screen-time, there’s a real danger that audiences could feel the same.

There’s a curious omission, too. Why did the Northern Soul scene emerge at all? Why that particular music, in that area? It’s implied that the youth of 1974 wanted to reject contemporary chart pop, but there were was an awful lot of underground music being made at the time. They could have latched on to that instead. So why, specifically, did they fall in love so heavily with obscure music from the previous decade? Reasons have been suggested, enough to fill entire books. But without some acknowledgement of how strange and unlikely a phenomenon Northern Soul was, non-converts seeing the film might be left wondering what on earth it was all about in the first place. 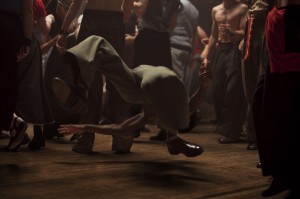 There are certainly some charming, funny moments, and strong cameos (Ricky Tomlinson as John’s ailing Grandad; Steve Coogan as John’s antagonistic teacher; James Lance as a Roger Eagle/Russ Winstanley hybrid DJ.)  In a Q&A session with Stuart Maconie following the screening, Elaine Constantine is enlightening about her career as a photographer, her love of 60s British New Wave cinema, and her initial plans to make a documentary on the subject rather than a drama. Unfortunately, it’s as a piece of drama that it falls down.

It’s a shame to pick holes in such a bold, well-intentioned project, especially before it’s even released but, sad to say, Northern Soul is a bit of a let-down. Yes, it looks great and it sounds great but as far as characters and story go it lacks verve and it’s disappointingly ordinary. That said, this writer found himself sitting next to an enraptured original Soulie who couldn’t stop dancing in her seat during the club sequences, even – yes – doing hand claps. But it’s hard to believe that such a slight, underwhelming tale is going to satisfy a mainstream audience beyond those who Keep the Faith.

Northern Soul will be on general release in the UK later this year.