This is Northern Soul’s second visit to the prestigious Buxton International Festival in what I hope will become an annual trip. As before, my companion for the evening is Dr Andrew Moor, inestimable colleague, wit and font of all things operatic. The object of our sojourn was Opera della Luna’s updated production of Donizetti’s comic opera, La Fille du Régiment. Opera della Luna are a touring group of singer/actors specialising in comic pieces and are about to celebrate their silver anniversary in a testament to their founder and director, Jeff Clarke.

Part of our developing tradition is a pre-theatre meal. After much internet to-ing and fro-ing, quite by chance, we passed the Old Hall Hotel. Peering in the window, we found a dinning room worthy of our lofty aspirations. Crisp white table clothes and a jolly maître d’ with a clip board beckoned us in for a fine meal, and heavens above, a dessert trolley! The prix fixe Buxton Festival menu is sure to become a regular fixture. In Northern Soul’s gathering lexicon of true northern phrases I can now add Dr Moor’s apt description of the experience as achieving “full peak Kenwicks”. 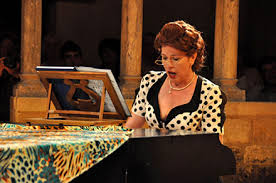 Across the square, a glass of prosecco and into Frank Matcham’s beautifully designed Buxton Opera House for the evening’s performance. The crowd at the festival always makes us feel like city dwelling, alien fish visiting a not too distant planet inhabited by better dressed but oddly old fashioned folk living in some halcyon Tory dream that is forever England designed by John Major (this last obscure reference will become clearer when we reach the interval, trust me). 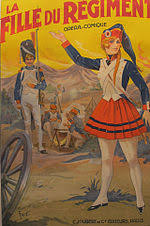 The Daughter of the Regiment is the story of an abandoned baby raised by a French army unit during the Napoleonic Wars. Opera della Luna has transported the setting to a bike gang, ‘The Regiment’ in the desert sands of Southern California where Marie (Elin Pritchard) is ‘all growed up’ into a fine-looking biker chick. Much to the annoyance of her adopted father, Suplice (Charles Johnston) and the rest of the regiment, Marie has fallen for Tonio (Jesús Álvarez) an Hispanic immigrant. In their eyes he is little more than a ‘spic’ and as Marie is promised only to members of the gang, Tonio must prove himself and become a member of the regiment. To complicate matters, Marie is found to be a relative of Marsha Berkenfield (Katharine Taylor-Jones), a rich socialite from West Hollywood and taken to her mansion to be groomed and married off to another wealthy family. Thus ends act one.

The interval brought even more drama when the interweb brought us news of the resignation of Big Boris, our bumbling fool of a Foreign Secretary. I suspect that the Toryesque audience would not ally themselves to the Johnsonite wing of the party, being far too gentile. Though I was sorely pressed to ask Edwina Currie for her thoughts on the matter as she stood next to me at the bar. Manners and a thought that she was still haunted by the awful memories of Major tucking his shirt into his Y-fronts forbade me to approach her with current affairs.

The second act jollied along to a happy ending with Marie turning out to be the daughter, not only of the regiment but also of Marsha and the late ‘Big Randy’. Tonio, who has become the President of the Regiment, gets his girl and I am happy to report, hits all the high Cs required of the famous aria, “Ah! Mes amis, quei jour de fête!”

It was a very entertaining night, one way or another, but I will remember Elin Pritchard’s fine voice and Robert Gildon’s ‘Mr Hortensius’, who added a lot of perfectly timed comedy to Donizetti’s comic opera.