Punk or junk: what happened to Britain’s punk scene?

Ly Stewart September 5, 2020 Music Comments Off on Punk or junk: what happened to Britain’s punk scene?

1976 wasn’t the best year for the UK. The nation was hit with economic turmoil, suffered numerous heatwaves and droughts and, to top it off, Brotherhood of Man’s Save All Your Kisses for Me was number one in the charts for six weeks. But from these hardships, Britain birthed possibly one of the most influential genres the Western world had ever seen: punk.

Sure, the country was in one of history’s largest financial and political crises, but that bleakness and despair was what made the anarchist anthems of The Sex Pistols, The Clash and The Damned so impactful. Infamous hits like God Save The Queen and London Calling rioted their way into the charts, giving the common people a collective voice to scream at the oppressive forces of the government, as many had wanted to do for so long. Gone were the days of disco and funk, the people were angry and they showed it through punk.

Today though, the rebellious, tartan-clad stylings of traditional punk seem outdated and stale. Too rough around the edges for the 21st century star. So why is it still here? Punk as we know it is still thriving – it has simply been buried alive. And, like an impervious sci-fi creature, punk has adapted to its new life underground, perhaps even better than it did on the surface.

Fifty-year-old AJ Phink is one of the people attempting to dig it up. “If you go back to the 60s and 70s, the people who ran the record labels didn’t really understand what people were into,” he says in cynical reflection. “They just signed anybody that sounded like what the kids were listening to. It was more manufactured and styled. Now there is a really vibrant underground scene. I think it’s stronger now than what I’ve ever seen in my lifetime.” 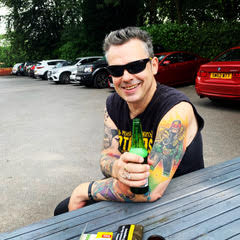 As he sits surrounded by five cats, Phink tells me that he’s been a punk since childhood and now writes reviews for ThePunkSite.com in his spare time, a position he secured after the website’s staff took note of his “incessant tweeting” about the music he loved. Phink believes that punk is still very much present in the modern day, but it’s not the grandiose rock star–producing, money-making movement it used to be. While it may not be profitable, modern punk has retained an aspect that the traditional movement held high: a DIY work ethic.

“It’s all at a lower level. No one makes a real living out of it anymore, it’s got easier to actually make music and build a following through social media and websites.”

Considered the ‘fuel of the subculture’, the DIY side of punk has been keeping the movement going for decades. When the 80s rolled around, the ramshackle and rebellious innovation that was punk music became regarded as old-fashioned. New synthed-up bands like Depeche Mode and Tears for Fears entranced the public with their futuristic sound, producing never-before-heard genres like new wave and synthpop. But that didn’t stop punks from making music for themselves.

Now aged 59, Roger Hindle, guitarist for Bacup-based rock group Riflemen of War, was one of those punks. He found that it was the more hands-on approach to making music that made it all so compelling. 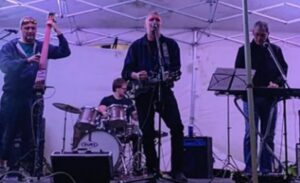 “[Punk] was an antidote to a lot of classic rock bands that were touring at the time,” he says. “It showed that we don’t all have to be middle class do-gooders with massive amplifiers and studios. You could just set up with some guys in a garage and bash out a few tunes.”

Back then, the dedication and determination of punk rockers kept the movement going. Fanzines like 48 Thrills and Chainsaw updated fans on new releases and news. Small venues were set up and independent record labels were founded, allowing up-and-coming artists to gain some publicity, even if it was just locally.

In a way, this means that today’s punk rockers have come full circle. However, with social media and the internet allowing anyone and everyone to put themselves out there, it may actually be harder for new musicians to gain notoriety like they did in the past.

Phink suggests that the collapse of smaller publications and even big music shows like Top of the Pops means that fresh-faced punks have to fight against the “blizzard of social media” to get truly noticed. 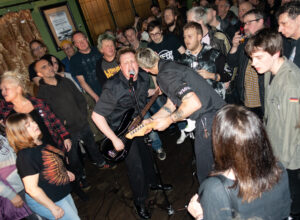 Today’s aspiring rockers may not be famous, but they’re certainly persistent. To an old punk like Hindle, simply sticking to their own makes new punks worthy of their title. “They play what they want to play. It’s for a small fanbase, but they’re true to their volition. Don’t like it? Try somewhere else.”

The 21st century’s incarnation of punk isn’t just going back to its self-made origins, though. It’s also reclaiming its politically charged roots. This isn’t too surprising. Punk has always had politics as its lifeblood, its motivation to continue existing, emerging as a physical embodiment of the working class public’s frustrations with their government.

Considering today’s current political climate, it’s surprising that the stereotypical rebels haven’t come out of the woodwork to once again stand against the establishment through the power of music. The punks of today, however, are a bit stuck when it comes to politics.

Paul Davies, frontman of Ramsbottom’s UkulelePunk (or UkePunk, for short), believes that sites like Twitter have made it hard for more politicised music to stand out. Davies is no stranger to using political commentary in his music, but now that everyone can expound their political thoughts on public forums, he thinks that “people are sick to death” of it all.

“It should be a better time than ever for bands to find material. There are still highly political bands about, even young ones, but a lot of people just feel lost.”

Taking all this into account, it would be reasonable to assume that – despite all the societal changes- punk’s new renaissance is on the horizon. But there is one rather anti-climactic reason why modern–day punk is still being chased underground: fans of the classics simply aren’t interested in the new stuff.

To say that punk left an impact even after it fizzled away from the mainstream would be an understatement. If all the DIY-based determination to keep it going wasn’t enough, the many festivals set up to celebrate the genre are proof that punk never truly died.

Established in 1996, Blackpool’s annual Rebellion Festival is the UK’s largest and longest running punk festival with consistently big-name headliners and up to 10,000 visitors a day. On the other hand, The Manchester Punk Festival is a smaller celebration of punk, providing a platform for more than 100 up and coming artists. 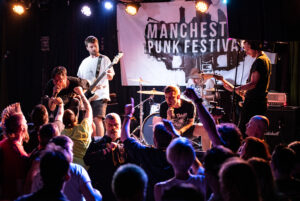 Phink thinks the lack of recognition new artists receive, even in live settings, is disappointing, but not entirely unexpected. His own experiences with friends suggest that older punks just can’t get to grips with the new stuff.

“It’s kind of like a goldfish bowl. Punks are still living in goldfish bowls of what they’re interested in and then they get stuck in a rut.”

With all this in mind, it’s possible that punk will never be mainstream again, but it’s still fighting to be here. Older fans may still be hanging onto the days of Johnny Rotten and his gang, keeping the classics alive, but there is a new face of punk among all the mohicans and leather pants. It’s simply dwelling in the underbelly of the internet, inhabited by young musicians in their bedrooms and local bars, still creating meaningful music whether anyone listens or not.