Racing the Loser with Lau

Since their emergence in 2006, Scottish folk supergroup Lau have established themselves at the top of the UK folk scene, picking up awards with almost embarrassing regularity. The Radio 2 Folk Awards’ Best Group of 2013 visited Manchester’s Central Methodist Hall as part of their current Race The Loser tour, and blew us all away.

The band have developed a more industrial sound, especially on this new Race The Loser album. And yet the music is still linked inextricably to the land and to place.

Close your eyes during opener The Burrian, from their 2009 album Arc Light, and you’re on an Orcadian outcrop looking past the gannets toward Norway. It’s a bold start given added impact by Kris Drever’s powerful vocal lines, combining with Martin Green’s dextrous, often crunching, accordion and Aidan O’Rourke’s intricate fiddle to glorious effect. But where earlier albums had feet planted firmly in soft acoustic ground, later work has a harder edge – especially this one. 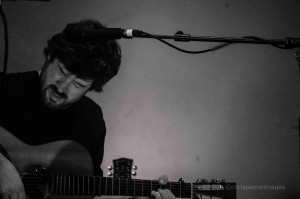 Sharp hits, metallic harmonics, slide steel and laptop loops; this is the sound of a past (and future?) industrial Scotland, of rigs and factories. The brooding Far From Portland is the most obvious example, brooding and dark with looped mechanical beats, but with light touches provided by Green’s additional keyboard. The set is peppered with songs, Drever’s warm peaty voice given a chance to shine on Throwing Pennies and Saint Monday (a stunningly ethereal new piece, all violin harmonics, slide guitar and mournful chords on the accordion).

The band finishes with the glorious Hinba, the first tune from the first album, Lightweights and Gentlemen.

One minor gripe was that they didn’t play my favourite tune from the new album. Beer Engineer is reminiscent of the wonderful Penguin Cafe Orchestra. Maybe next time…

Review and photographs by Chris Payne 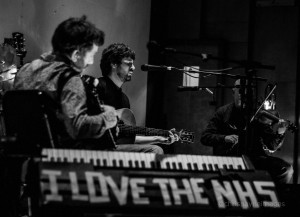