Alfred Searls May 7, 2013 Duckspeak Comments Off on Red star in Manchester 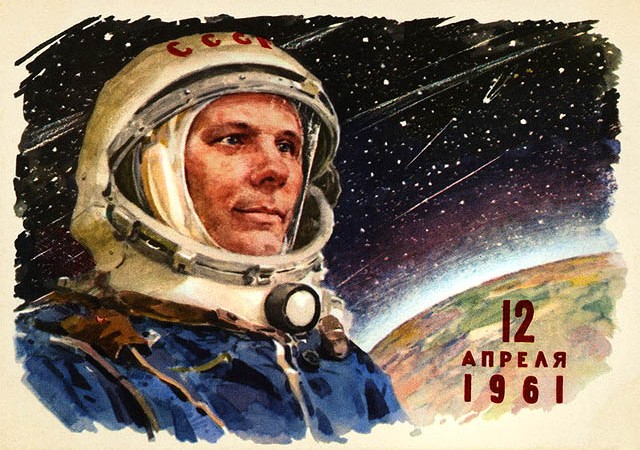 It is 7.10am on April 12, 1961. Major Yuri Alekseyevich Gagarin of the Soviet Air Force climbs into the tiny capsule a-top of the nascent soviet spacecraft, Vostok 1. Gagarin, the son of a carpenter and a milkmaid, is a volunteer who knows that many in his country’s space programme privately think he has no more than a 50 per cent chance of surviving this mission. For the next two hours the rocket simmers silently on the launch pad, awaiting its cue to launch into history.

Finally the word is given and amid a sea of flames the tall steel vessel rises towards the heavens, slowly at first, but gathering speed with each passing second until soon it is arcing through the atmosphere at a terrifying velocity. Gagarin endures ten minutes of gruelling acceleration before the rocket’s final stage shuts down; ten seconds later the spacecraft separates and for the next hour and a half Vostok 1 orbits the Earth.

Yuri Gagarin has just become the first human being to leave our planet behind and, in doing so, he has become the most famous man on the planet. Exactly three months later he steps off a Vickers Viscount airliner, aptly named Sir Isaac Newton, and onto the tarmac at Manchester airport.

Be honest now, you didn’t know about that last part did you? Well, you’re not alone. His visit to the city has been largely forgotten, even here in Manchester. But the story of how the young cosmonaut found himself in the world’s first industrial city is one that deserves telling, not least because it goes a long way in explaining why Yuri is not only remembered all over the world, but also loved.

I can’t actually recall a time when Yuri Gagarin wasn’t my hero. For as long as I can remember that short, ever-smiling cosmonaut has loomed large in my imagination. When, years ago, I first learned that he had visited my home city I was actually giddy with excitement at the news, and even now I still feel a thrill of civic pride at the thought of his visit, only his second trip abroad since his return from space (the first being a brief trip to Finland, then a Soviet satellite).

The visit was a result of an invitation from the Amalgamated Union of Foundry Workers who, in their own words, were keen to “benefit directly from all this friendly publicity and interest” by inviting the cosmonaut to visit them at their Manchester headquarters. Now, on the face of it, this might have seemed like an unlikely gamble given that the Soviet Government was inundated with invitations from all over the world for a visit from the first man in space. But on closer examination it was a shrewd, if admittedly bold move.

At 16, Gagarin began his working life as an apprentice foundryman at the Lyubertsy works near Moscow. Later, while continuing his studies at a trade school at Saratov, he spent the weekends learning to fly in the air cadets. After completing his studies the young Yuri went into the armed forces and won a place at the Soviet Air Force School at Orenburg, from which he graduated in 1957.

But Gagarin never forgot his roots, and neither did the keen boys and girls in the Soviet Foreign Ministry. However, unlike the ghastly Soviet nomenklatura and their spurious attempts to be prolier than thou, in Yuri this trait always seemed entirely genuine. In any event the Soviet Government rightly saw that having the first man in space receive a medal from one of the largest unions in the world, in the city written about by Frederick Engels, was a first class PR opportunity. And what could be more proletarian than the hero of the workers state meeting his fellow foundrymen on the factory floor? Major Gagarin himself was said to have been delighted by the idea.

Interestingly neither he nor his government had any interest in his going to London to meet the leading political and social lights of the day. It was only when the Foreign Office pleaded protocol, and presumably enticed the visiting Soviets with the prospect of cucumber sandwiches that they were persuaded to add another day to their trip in order to visit the capital.

And so, on a rainy day in July (yes, it was raining in Manchester, in July) Yuri Gagarin stepped off a plane at Manchester’s Ringway airport…and pandemonium broke out. No sooner was he on the ground than a huge crowd broke through police lines and carried him joyously away on their shoulders. Throughout this the young cosmonaut was the very model of good natured patience and composure, waving, smiling and shaking hands before anxious police officers finally managed to persuade the adoring crowds to give him back. It was a good start to Yuri’s big day out in Manchester. 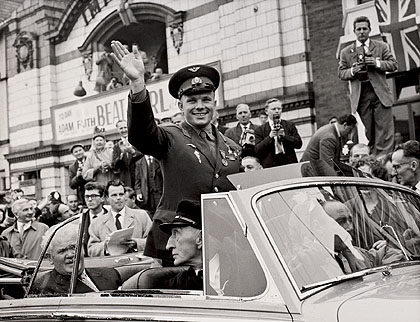 Mancunians lined the route to union headquarters, on Chorlton Road in Moss Side, in their thousands. As the rain came down like stair rods the young pilot insisted that the hood of his Bentley remain down, so he could stand and wave at the cheering crowds, telling his minder/interpreter: “If all these people have turned out to welcome me and can stand in the rain, so can I”. Among the cheering crowds were legions of schoolchildren, some taken to see the visiting spacemen by enlightened teachers, others arriving via more enterprising routes, and throughout its journey the car was showered with flowers by the welcoming masses.

When a soaked Yuri finally arrived in Moss Side he was mobbed lovingly by another huge crowd of well-wishers, many of whom had waited for hours in the rain to catch a glimpse of their hero. Inside he was treated to a formal ceremony in which he was presented with a specially made gold medal, and made the first ever honorary member of the Amalgamated Union of Foundry Workers. Speeches were made and toasts were raised, yet Yuri still made time to break away from the festivities to go to the window, where he remained for some time, smiling and waving to the adoring crowds outside.

Next up for the visiting Russian was a tour of the vast Metropolitan Vickers works in Trafford Park. Cue more crowds and more delays as the motorcade was stopped by yet more friendly mobbing, but at least the rain began to let up. In fact, so vast were the numbers of well-wishers that it seemed to many that day as if the whole of Trafford Park had downed tools in order to hail the visit of the first hero of the space race. Consequently, the tour of the factory complex was good natured British chaos at its best.

At one point a photographer stood on a casting in order to get a better shot and Yuri was seen to politely motion him to come down, explaining through his interpreter that he knew the casting was unfinished and that he might inadvertently damage it. “I was a foundry worker, and although I am doing a different job now, I am still a foundry worker at heart,” he said.

When finally his car pulled out of Metrovicks and set off for the official reception which awaited him at Manchester Town Hall, the crowds lining the streets had grown even larger, although this time they were joined by the players of Manchester United as the little convoy moved slowly past the Old Trafford stadium. Red stars clapping and cheering the red star.

This extraordinary and spontaneous outpouring of love for the first of our kind to touch the heavens set a pattern for all of Yuri’s foreign trips. Wherever he went he was loved as well as admired and, like Neil Armstrong after him, this modest, smiling, unfailingly polite man soared high above the mendacious and mundane world of fame and politics to take his place among the stars.

I’ll leave the last word to the Manchester Evening News at the time: “His was a human achievement; a victory for man’s spirit and courage. That is why any sort of hesitation in the hospitality would have jarred so much. But any suggestion of that has been swept away in the tumult and the shouting, for the ordinary people’s cheers have blown away the cobwebs of protocol. It is the human warmth of the welcome that counts.”

See footage of his visit