Review: Sunday Best at The Principal Hotel and The Refuge, Manchester

Emma Yates-Badley August 21, 2017 Hotels, It's Not Grim Up North, Northern Soul writes..., Taste Comments Off on Review: Sunday Best at The Principal Hotel and The Refuge, Manchester

Recently, I came across a snap of the new signage on the old Palace Hotel building. It was posted on Instagram and the photographer had commented how it was odd to see another name on the iconic, Victorian building. For so long, and certainly during the time I’ve been a resident of Manchester, it’s been an unmistakable landmark on the city’s skyline, and synonymous with its previous name. I must admit, it’s a little strange to glance up and now see the word Principal.

It’s a magnificent building, terracotta in colour, spanning an impressive chunk of Oxford Road, and dates to 1890 when it first opened as The Refuge Assurance Company headquarters.

The Principal is trendy, with zero trace of the stuffy buttoned-up vibe found in some of the other chain-hotels. I tend to opt for an Airbnb when I’m visiting a city, purely because I enjoy a more laid-back atmosphere. But, now and again, it’s nice to treat yourself to something slightly more luxe, and The Principal seem to have struck the balance between cool, comfortable and high-quality.

Don’t get me wrong, it’s fancy. I arrive in the lobby in a threadbare vintage dress I can’t bear to throw away and trainers, and instantly feel a bit out of place amongst all the grey stone and the high-domed ceiling (and the giant horse statue just hanging out in the middle of reception), but I’m soon put at ease by Andrea, one of the fantastic receptionists. We’ve arrived a bit early so I can’t go and check out the room (check in is at 2pm) so we head to The Refuge by Volta where we’re booked in for Sunday lunch as part of the The Principal’s Sunday Best package which also includes an overnight stay and a tasty breakfast. 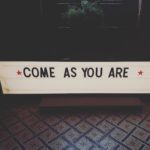 As hotel restaurants go, The Refuge is certainly one of the best. It operates as a stand-alone eatery and bar (you don’t have to be a guest at The Principal to dine there or frequent the bar) and, as soon as Housemate and I grab our drinks (beer for me, tea for Housemate) and take our seats, we’re already planning her next birthday with The Refuge in mind as the venue. The bar has such a lovely vibe, all big open windows, natural light and vintage looking fixtures. I feel like I could rock up in a 1920s sparkly dress or a pair of jeans and converse and still feel comfortable in my surroundings (plus, Housemate deems the light selfie-worthy which is very high praise indeed). After all, their motto is Come as You Are. There’s also the super cute Winter Garden which is a bit like a posh, fairy-tale conservatory filled with plants and comfy seats. Dreamy. 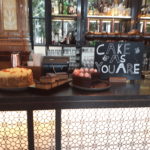 Once again, the service is faultless. Dressed in jeans and t-shirts, the image of stiff, uppity wait staff that so often goes hand in hand with upmarket hotel restaurants, is replaced with a far friendlier feel. Both Robbie and Lauren, our servers, are pleasant, funny and informative. They take pride in knowing their menu.

“I really can’t fault this,” says Housemate. “The meat is thinly sliced and not tough. It’s delicious.” 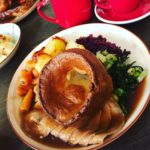 She’s opted for suckling pig, and I pick the vegetarian option. I never really have high hopes for a veggie roast – it’s usually lacklustre and involves nuts – so console myself with extra vegetables and potatoes instead. However, The Refuge serve up some proper tasty fare with their butternut squash (you literally get half the orange vegetable) and harissa. Now, the traditional amongst you might think that harissa doesn’t go with Sunday lunch, but for a girl who puts chilli flakes in everything, it’s my idea of heaven.

I’m usually all about the sides with a roast and The Refuge doesn’t disappoint. Crispy roasties, tasty gravy, well-cooked veggies (including Vimto braised cabbage) and, my absolute favourite thing to eat, a great big Yorkshire pudding. I scoff as much as I can but be warned, the portions are huge. At between £15-17, they aren’t as cheap as some of their competitors, but it’s worth the extra few quid. Lauren asks us if we like to see the desert menu and, although I’m ready to pop, Housemate and I have already perused the puddings.

“We don’t need a menu,” Housemate confesses. “Who are we kidding? We know exactly what we want.” 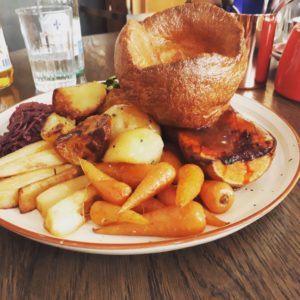 I plump for the sticky toffee pudding (my mum’s favourite), and Housemate picks the apple crumble. Both are delicious and I feel sad when I can’t finish it.

At first glance, the Sunday lunch menu might look a little pricey but it really is excellent value for money. The food is fresh, interesting and varied (and abundant!). There’s also the option to have the Roast Platter for Two (£39) which has a bit of everything (I caught a glimpse of this on another diner’s table and it is ginormous).

My only criticism – and this is just me being picky (and seriously showcases my addiction to cheddar) – is that the cauliflower cheese we ordered as a side, wasn’t cheesy enough. In our house, you mix in at least half a block of whatever cheese takes your fancy. When it’s served cold the next day, it becomes a solid entity and you can serve it in slices. But I think this says more about us than it does The Refuge. 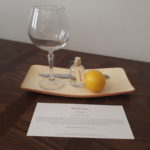 After I say goodbye to Housemate (she’s off home to make sure the dog hasn’t done something she shouldn’t), I head up to my room, accompanied by one of the lovely concierge team. We chit-chat en-route (The Principal is a labyrinth and the signage isn’t great, so make sure you note where you’re going. I got lost and ended up in a cupboard) and he tells me a little about the hotel, how he came to be living in Manchester (as a Brazilian) and how much he loves the place. I tell him I work for a magazine called Northern Soul and he replies, quite rightly, “I think this hotel certainly has a lot of northern soul.”

My room is beautiful but huge, a bit too big for little old me (there’s two double beds) but if I was with someone else, I’d probably feel differently. The windows are also gigantic which is a wonderful during the day as they let in a lot of natural light, but a bit of a pain during the night. I struggled to close the enormous, heavy curtains, and the streetlight shines through a small gap that I can’t quite cover. 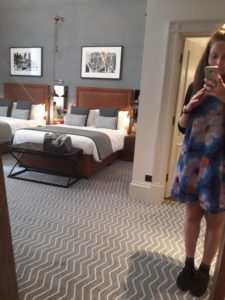 I feel a bit like a numpty, sitting in the fancy hotel room on my tod, so I’m glad I’ve bought my laptop. However, as soon as I check out the bathroom facilities, and realise there is a swanky looking tub (and a fluffy white dressing gown) it’s a nice, hot bubble bath and a good book for me. I can literally sit in the tub for hours, topping up the hot water, getting lost in a novel, and this is exactly what I end up doing. Bliss. 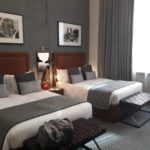 Another notable thing is that for a city-centre hotel, it’s pretty peaceful. Although you can hear the coming and goings from the street below, it’s not loud, and I fall asleep to the gentle city lullaby.

In the morning, I check out early and grab breakfast at The Refuge. Breakfast looks like a grand affair. There’s huge canteens full of scrambled egg, potato cakes and bacon, plus fresh fruit, cereals, pastries and muffins. There’s also the option of an a la carte menu including a Full English, and a veggie version, alongside dishes like smashed avocado and eggs benedict. Toast is freshly made and brought to the table along with your choice of coffee or tea. I’m in a bit of a rush so I forgo the a la carte option (it took all my willpower not to order smashed avocado) and head to the buffet.

So, if you’re looking to head to Manchester for a few days, or – like me – you just fancy a break from home, you’d do well to check out The Principal and their Sunday Best Package. It’s a delightful hotel full of heritage, with a cool vibe, friendly staff and decent food. What more could you want?

The Refuge by Volta