Review: Around the World in 80 Days, The Lowry, Salford

It’s been retold a hundred times but, as everyone knows, at the start of Jules Verne’s original novel the Victorian gentlemen Phileas Fogg makes a bet that he can cross the globe in, well, 80 days. In its own way this touring production does something similar: it bets audience members that they’ll see the whole widescreen adventure unfurl before their very eyes. What’s more, it manages to pull it off.

Originally presented in the round by the New Vic in 2013 before a successful run at Manchester’s Royal Exchange, Around the World in 80 Days has now been reconfigured for a national tour, which seems wholly appropriate. Adapted from the novel by Laura Eason and directed by Theresa Heskins, the devilish ingenuity on display here in conjuring up adventures set across whole different continents during the 1870s is breathtaking, and again that’s rather fitting. Fogg’s dash needs momentum and this conveys plenty of it. 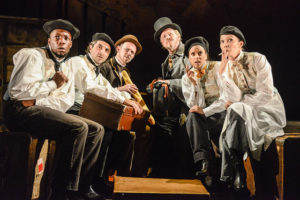 On one level it’s choppy and episodic at times, but what episodes they are, taking in circus troupes, fight sequences, peril at sea and an elephant ride. Plus, it develops some real substance beneath the surface. Fogg genuinely grows as a character, and his relationship with his valet Passepartout unfolds winningly. There are even moments which reflect upon Victorian colonialism without ever spoiling the party or slowing the pace.

A cast of just eight, including Salford’s own Matthew Ganley, portray more than 125 characters in total, but for all their dazzling skill, little can overshadow the leads Andrew Pollard as Fogg and Michael Hugo as Passepartou. They’ve both been in place since the original run, and together they make a fine partnership. Pollard has the less obviously show-stealing role as the detached, distant Fogg, but it would be a mistake to underestimate his pitch perfect performance. Hugo, though, must surely know he’s landed the role of a lifetime and his Passepartout is pure charisma, somehow bringing to mind LBC’s James O’Brien being possessed by the antic spirit of Norman Wisdom. He’s an uproarious delight, and does much to make the show the sugar rush that it becomes. Also worthy of note here is Dennis Herdman who does a sterling job as our villain, the troublesome Inspector Fix. 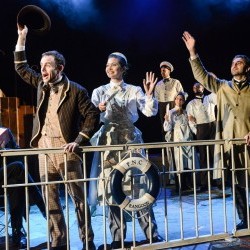 It’s a truly irresistible show, and that’s a lot to do with seeing a talented team deliver a piece that genuinely wouldn’t work in another medium. All involved here clearly understand and love theatre, and the result is thrilling. Not in an elitist way, either: tonight, theatregoers of all ages and walks of life are totally spellbound. Let’s face it, stage adaptations of classic novels can risk being worthy and dull, but if you wanted to prove to anyone of any age that theatre can be engaging and fun, this would do the trick.

It’s frankly irresistible, and has all the makings of a modern classic of family theatre. Only time would tell if it can work with a different cast. For now, just to be on the safe side, do not hesitate to see it while Pollard and Hugo are in their pomp. Certainly, while it’s at The Lowry for the season it can hold its own alongside any big bucks panto in terms of unalloyed entertainment. Just go and see it. Your Christmas will be better for it.