In India, Asha Bhosle, now 84, is much adored as a legendary playback singer – that is, a vocalist to whose performance a Bollywood actor mimes – in more than 1,000 Hindi films dating back to before the Second World War. That’s her being celebrated in Cornershop’s Brimful of Asha and, if you want to sample her work, Northern Soul is particularly fond of the groovesome O Saathi Re.

Asha is also a keen cook. Since 2002 she’s has been putting her weight, and her name, behind an international chain of traditional Indian restaurants, the popular Manchester branch of which has just rejigged its menu. It’s in a super-focal spot, on Peter Street a mere stone’s throw from Manchester Central, the library and St Peter’s Square. Within, it’s tastefully appointed, with exposed brickwork and gentle lamp lighting all in cream, black and purple. 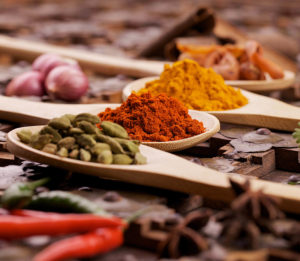 Even the poppadums are a bit fancy. OK, so a poppadum’s a poppadum, but seriously, these are proper poppadums, mainly thanks to the assortment of accompanying dips. No bog-standard mango chutney here, but rather the choice of pineapple chutney, tomato and prune, green apple with blueberry or mint and coriander yoghurt with a hint of garlic. Genuinely, they’re sensational and you could cheerfully pig out on these alone.

Not to be deterred, though, between us we moved on to the vegetarian and speciality platters. The former comprises paneer ka soola with peppers, tandoori broccoli so fresh tasting it can barely have been picked and aloo matar ki tikki, a dish of potato filled with peas and topped with pomegranate and mint sauce. Its non-veggie counterpart includes a tangy seafood seekh kebab, a murg malai kebab which is pleasantly redolent of butter chicken, and a corking gosht seekh kebab of spicy, almost liquoricey lamb. 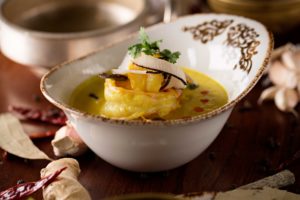 For our mains, we went for murg makhani and paneer jalfezi. Paneer is a tricky devil and can turn out a bit on the squeaky side if it isn’t done right. Thankfully, it’s done just right here. The makhani, a creamy chicken tikka dish, was exquistely done too, with a rich, tangy flavour. Neither portion was too large – this isn’t bargain bucket of curry territory – but rather expertly judged, and when we asked for medium spicyness, that’s precisely what we got, which again isn’t always the case. These are lively, classy dishes. The desserts, because it would be rude not to, were top-quality too – a lightly gingery crème brulee and gorgeous blood orange and caramel kulfi.

Now, Asha’s may not exactly be a budget option, especially with the manifold delights of Rusholme just a short jaunt away, but it’s doing just the job as a first-rate Indian restaurant right in the heart of Manchester. One small thing, though: go to almost any curry house in the country and you’re likely to be serenaded by Asha singing on the speakers, but curiously in Asha’s you get light jazz. Maybe it’s a sign of modesty on the boss’s part, but honestly, we’d rather hear O Saathi Re any day.