Brilliantly, either by accident or design, entrance to Australasia is gained by going literally down under: down a flight of stairs from a glass pyramid by John Rylands Library and under Manchester’s Deansgate. 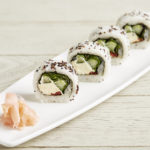 Many are the delights waiting in store there for the visitor. Because Australasia is a real class act. When you are served with wasabi here, it is freshly grated at your table against sharkskin. If you fancy a carafe of sake, you’re offered eight different options (and we had ours warm). We asked our waitress Leya to help us out with the latest menu choices and she duly followed our vague pointers and ordered everything for us. 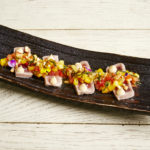 And blimey, what a splendid embarassment of riches it was. The whole lot was melt-in-your-mouth light and exceedingly fresh, just bursting with expertly-judged complementary flavours, and beautifully presented. It tasted just as good as it looked, which is really saying something.

As you’d expect, the emphasis is on Pacific Rim cuisine, taking in Indonesian, Australian, South East Asian and Japanese influences. The menu is replete with smaller dishes (with decently-priced lunchtime offers) as well as more substantial offerings. Sushi is an acquired taste, but if you’ve gone and acquired it, you’ll be well served here. We were much enamoured of the eye-popping Peking duck roll with hoi sin and spring onion; prawn, asparagus and cucumber; chilli and cream cheese; and mango, avocado and broccoli, marbled through with purple shiso leaf. In particular, though, the tuna blossom roll with lotus crisp was wonderful, a pretty and perfectly balanced confection. 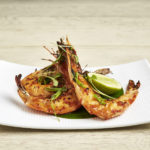 Manfully, we moved onwards to the larger dishes. The angry prawns, served with spicy chilli sauce, were as fiery as the name suggests. The rest were of an equally high standard. Squid tempura with sriracha mayo, Cornish crab salad with tempura sauce, octopus with squid ink and cherry sauce, deliciously salty mackerel fillet with pickled vegetable: each one a delicately-done little creation and not too stingy on the portion sizes, neither. Another real stand-out was the grilled seabass fillet with baby fennel, herb salad and ponzu, prepared and cooked to perfection, every forkful a luscious treat.

This kind of glorious seafood dominates the Australasia menu to a certain degree, but the meat offerings are also extremely good, not least a particularly juicy steak tartare. The Yakatori chicken skewers are fine, too, if perhaps on the unexciting side when compared to their table-mates. Somehow, though – and you might well say this was unwise – we’d worked our way up towards a large meat dish to finish on. Not a bad finish at all, though: wonderfully tender, delicious cannon of lamb served with black garlic and tenderstem broccoli. It would make for a exquisite meal in its own right, but we were much more greedy than that, obviously. 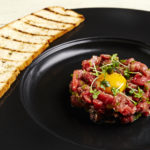 If this all seems a bit glowing, well, that’s only appropriate. On reflection, we simply weren’t served a single duff dish, and we were served a good few. After a while, the parade of food blended into one to some degree, but only in as much as they all merged into wonderfulness. The sea bass and those tuna sushi rolls might just have had the edge over the rest, but it was a pretty close run thing. We left happy, satisfied and, yes, slightly squiffy on sake. It’s just what you want from a meal out in the city centre. Australasia have identified the particular thing that they’re going to do, and my word, they do it very well indeed. 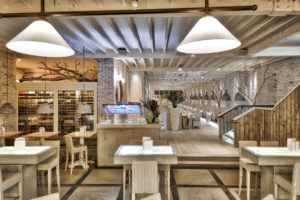