Don Giovanni has become quite the Manchester institution. Established in 1984 and now situated on Oxford Street just up the road from Central Library, it’s the city’s longest-serving Italian restaurant.

Of course, as institutions go, Christmas has a bit of an advantage given it’s now into its third millennium. Nevertheless, the two have hooked up for a special seasonal menu, A Very Don Giovanni Christmas, and it’s not a bad meeting of minds at all. A major draw is that celebrity chef John-Christophe Novelli is currently associated with the restaurant, and so each course comes with a bespoke Novelli option.

The open plan lay-out at Don Giovanni is certainly welcoming, as are the enormously helpful, friendly staff who seem genuinely happy to give honest menu advice. Of the starters, then, the polpette alla casereccia (home-made meat balls, cooked in a light cherry tomato sauce with fresh basil) was a simple pleasure, flavoursome and expertly judged. The Novelli starter, the bruschettine di funghi di bosco e acciughine marinate – mixed porcini & wild mushrooms and fresh anchovies, sautéed with onion, cumin and white wine, served on a crispy, grilled sour dough pugliese bread – was a winner too, beautifully blending a variety of flavours to very pleasing effect. 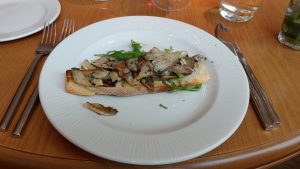 Of the mains, Novelli’s brasato d’agnello al barolo e liquerizia, polenta soffice alla salvia (lamb shanks, slowly braised in borolo wine liquorice, with carrots & celeriac, served with polenta and grilled fennel) was something pretty special. The lamb was delicious and perfectly done, positively dropping from the bone, with the soft polenta making for an ideal accompaniment.

You might argue, though, that the sort of fare you get on a Christmas menu isn’t really what a fine Italian restaurant like Don Giovanni does best. Sadly, that would seem to be the case with the tacchino arrosto – that is, british turkey with potatoes, carrots, sausages stuffed with sage. served with gravy and cranberry jam. This was considered to be a huge let-down. An entirely run of the mill course all in all; the turkey itself was seriously fatty and went unfinished. This kind of festive roast is done well by many a local gastropub, and by comparison this didn’t measure up. A salutary lesson, perhaps, that restaurants should play to their strengths.

This would never have stopped us from diving into the desserts, but an appointment with the Christmas market was looming and so it was time that defeated us. A particular shame, this, as Novelli’s slow roasted pears infused with honey and cinnamon looked supremely tempting.

So yes, that turkey may have been underwhelming, but all things considered A Very Don Giovanni Christmas is still pretty darn good – just not the outright slam-dunk that you might hope for.