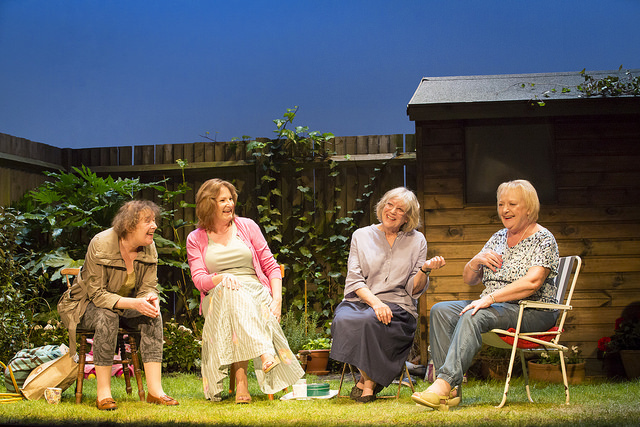 At just 50 minutes long, Caryl Churchill’s new one-act play Escaped Alone nevertheless manages to go on a bit. It’s a snapshot of innocuous little lives and the darkness which can lurk at their edges, but in the final analysis, it doesn’t have all that much of real interest to say.

Directed by James Macdonald for the Royal Court and currently on transfer to Salford’s Lowry for five days, it sees Mrs Jarrett (Linda Bassett) join her retired neighbours Sally (Deborah Findlay), Lena (Kika Markham) and Vi (June Watson) for a cup of tea and a natter in a sunny back yard. They reminisce, they ponder, they talk about TV shows, career choices and lost local shops. It’s all conveyed in quick, intercut dialogue, with regular interludes from the dark recesses  of Mrs Jarrett’s mind. By and by, we discover more about each character and the almost metronomic rhythm is broken up by moments when, one by one, they reveal to the audience their darkness secrets and fears. 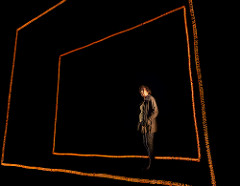 It would be trite to liken it to an edition of Loose Women scripted by Samuel Beckett, but to be honest, that’s not entirely wide of the mark. The key themes presented here – that we all keep parts of ourselves hidden from public view, that even in company we are trapped with who we are – are powerful indeed, but Escaped Alone doesn’t offer much fresh insight. Its blend of everyday life and psychological expressionism is diverting at first, but it quickly wears thin. On a broader canvas, it might perhaps have taken flight. As it stands, it’s like a curious but not entirely successful short story.

To its credit, the production does boast a strong cast, particularly Bassett and Findlay, who find an appealing lightness of touch to throw the dark stuff into sharp relief. There are a number of bold, striking staging devices and some moments of genuinely compelling joy and despair, but they’re all too fleeting. There are points when the piece teeters intriguingly on the brink between extraordinary existential terror and black humour, but they don’t last or lead anywhere. These aren’t substantial characters to connect with or invest in, and there’s no plot as such. It’s no more than the sum of its parts, undeniably well-executed yet essentially underwhelming. Instead, it’s like a spell which doesn’t quite work, and ultimately, it’s simply rather slight.