Review: Fantastic Beasts and Where to Find Them

Here’s a sobering thought: the last of the Harry Potter films was released back in July 2011, meaning that today’s young Potter fans may never have seen any of the original series in a cinema.

All told, the eight-film franchise took more than $6 billion at the global box office. It’s not entirely surprising, then, that the wizarding world which JK Rowling created has now been revived and expanded. Fantastic Beasts and Where to Find Them is based very loosely on a Harry Potter spin-off book she wrote for Comic Relief in 2001, transforming Newt Scamander, the book’s fictional author, into a fully-fledged adventure hero who predates Potter by several generations. According to Rowling, it’s set to be the first in a series of “at least” five Scamander films.

Obviously, there’s no way on earth that Fantastic Beasts can avoid being compared to the Harry Potter series. Nor is it really trying. Starring alongside Eddie Redmayne as Scamander – an awkward, spirited and talented young wizard – is Dan Fogler as his rather oafish, cowardly yet fiercely loyal sidekick, Jacob. They’re joined by Katherine Waterson as Tina, a smart, level-headed and winsome young witch. Regular Harry Potter fans might see a pattern here, but then this direct mirroring of old characters in their successors didn’t do Star Wars: The Force Awakens any harm. In fact, a key Fantastic Beasts plot point plays like a cheeky swipe from the Harry Potter film debut The Philosopher’s Stone. 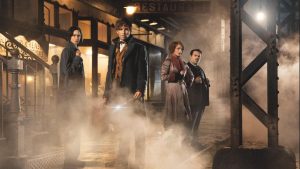 All things considered, this is full of promise as a romping family adventure movie. Unfortunately, it’s a bit of a let-down. It’s no disaster – the team know what they’re doing. The script has been written by Rowling herself, her first original screenplay, and it is directed by Potter mainstay David Yates. The new setting of New York during the Roaring Twenties is visually rich and vivid in atmosphere. But somehow it lacks the vital ingredient of – yes – magic.

The script is often flat and clumsy. The dialogue is distinctly uninspired, and as a result the new characters don’t exactly leap off the screen. There are some duff performances, too. In particular, Colin Farrell as Percival Graves manages to appear simultaneously embarassed and glowering, which is quite a feat but sadly not the right one. The mighty Samantha Morton, meanwhile, has precious little to do as a witch-obsessed extremist.

The leads acquit themselves well, not least a highly likeable Fogler as Jacob. Redmayne makes for a charming, sweet, albeit slightly one-note Scamander. Some observers have noted that his character bears a striking similarity to Matt Smith in Doctor Who. Indeed, Scamander is a nattily dressed, geeky young genius who is obsessed with strange creatures and travels with a magic suitcase of infinite dimensions, so it’s just possible that Rowling has occasionally been watching BBC One of a Saturday night. It’s a curious fact, though, that Matt Smith was actually in the running for this role, too. In practice perhaps this would have risked him being type-cast at an early stage in his career, but it’s still tempting to wonder what he might have made of the part.

Probably the most marked difference between this and its parent series is that it’s far more effects-driven. There are some sequences which use this well, but all told, as the title suggests, this is mostly concerned with miraculous CGI visuals and consequently it often lets the ball drop where the characters are concerned. That wasn’t something that even happened with the thoughtful, faithful screen adaptations of the Potter books. 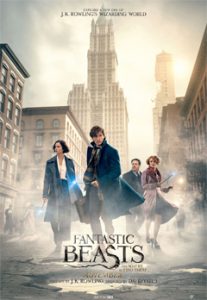 The biggest stumblling-block here, though, is the plot. Without giving too much away, what is essentially a sub-plot with little connection to Scamander swells to take over the denoument of the tale, but it feels like our heroes happen to be in the right place at the right time rather than having driven the story forward themselves. Coincidences never sit right in a blockbuster movie like this. There are also yawning great plot holes that you could build a wizarding school in. Plus, there’s a real unevenness of tone, swinging from delightful family-friendly larks to some very dark stuff indeed, and it’s far from deftly done. The Harry Potter films encompassed both of those extremes, but the tone developed gradually over the whole series. Here, it lurches about in an ungainly fashion from scene to scene and younger viewers could be left very unsettled.

In truth, there is fun to be had here, and there is plenty of potential. Certain set-pieces develop a real spring in their step and lift the film as a whole. But it’s a somewhat inauspicious start. True, the Harry Potter films generally got better as they went along and didn’t exactly start on a high. Rowling is a writer with a genuinely great gift for a ripping yarn, and so it’s to be hoped that better things are to come. There’s a lingering suspicion here, though, that – coupled with the pretty underwhelming Potter stage sequel The Cursed Child – there might be something in that old adage about quitting while you’re ahead.

Fantastic Beasts and Where to Find Them is on general release